List of the many residents of Cape Suzette (and elsewhere) in the animated series TaleSpin.

Higher for Hire and other main characters 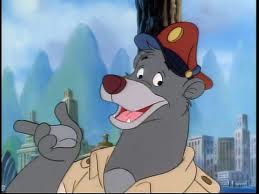 A slovenly middle-aged bear and a top notch pilot, Baloo's key goal is to buy back his beloved plane the Sea Duck from Rebecca Cunningham, who has bought his dying cargo service. Baloo is naturally swiped (and anthropomorphized) from Disney's Animated Adaptation of The Jungle Book (1967). 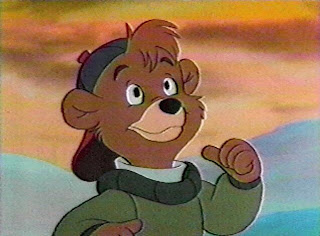 Voiced by: Alan Roberts and/or R.J. Williams, depending on the episode

Baloo's right hand bear and basically a surrogate son. Orignally an air pirate, before stealing a treasure from Karnage and making friends with Baloo. 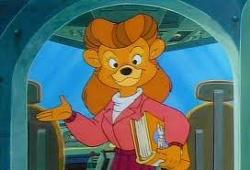 A young entrepeneur woman bear that bought Baloo's cargo service (and as a result his plane, the Sea Duck) and renovated it into Higher For Hire. Often butts heads with her employees, especially Baloo, in early episodes, but she softens up as the series progresses. 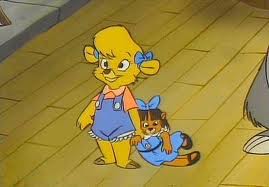 Bubbly six year old daughter of Rebecca. Occasionally rambunctious and fond of sneaking into some of Baloo's travels. Sometimes pretends to be her favorite superheroine, Danger Woman, complete with a homemade costume. 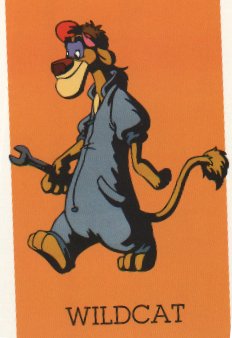 Eccentric mechanic for Higher For Hire. Spacey and not too bright, but kind-hearted and extremely competent at his job.

A jiving orangutan and owner of Local Hang Out for air pilots, Louie is Baloo's best friend and occasional comrade in adventures and Zany Schemes. Similarly anthropomorphized from The Jungle Book (1967). 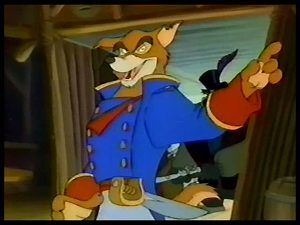 Spanish-accented captain of the Air Pirates, intent on getting past Cape Suzette's security and plundering the town. A somewhat clownish villain who usually serves as the show's main antagonist. 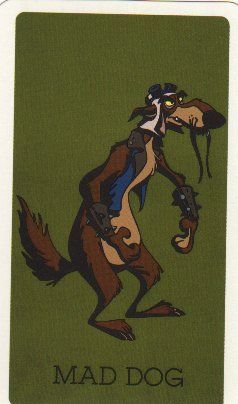 The whiny, brownnosing, but ultimately disloyal lackey pirate of Don Karnage. He is nearly always paired with Dumptruck. He has a very nasal voicetone. While he follows Karnage out of a sense of greed and fear, he'd turn on him in a moment flat if he thought he could get away with it, and stab him In the Back (episodes: "Stuck on You", "A Baloo Switcheroo"). 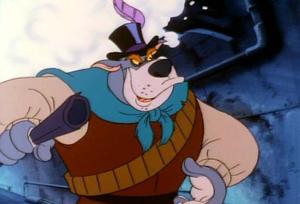 He's another lackey pirate, definitely the muscle of Don Karnage. He is nearly always paired with Mad Dog. His gruff side comes out when he's all business, but when he's not on the job or angry, he actually reveals a rather jovial, good-natured side. He is, sadly, not the brightest star in the sky. He speaks with a Swedish accent. 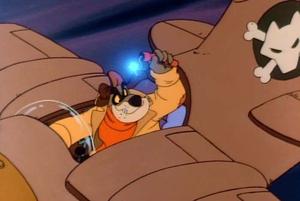 Another of Don Karnage's pirates. Gibber usually stays close to Karnage, ready to whisper some idea or observation to his captain. He seems to be an advisor of sorts. 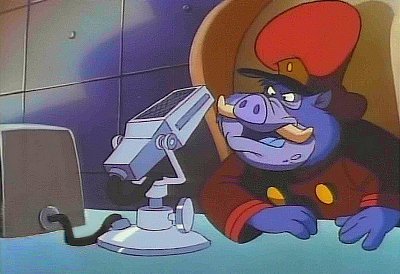 The short, ill-tempered and frequently put-upon head of Thembria's air force, Colonel Spigot is another character who like Shere Khan can be Baloo and friends' ally or enemy depending on the story. Like all Thembrians, he's a blue boar/warthog. 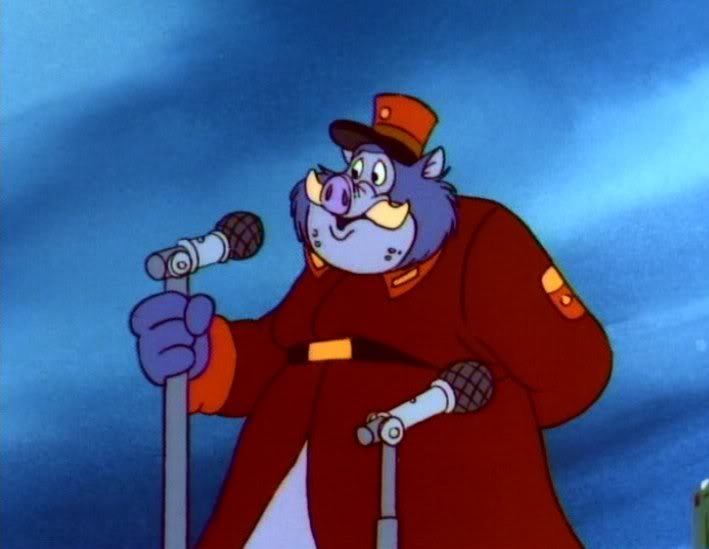 Colonel Spigot's tall, extremely laid-back aide who, although loyal to his commanding officer, seems as though he finds military life dull and would rather just chill out with his friends. Even when it's Thembria's enemies Baloo and the gang!

The large and ruthless ruler of Thembria. Everyone in that nation fears him, and people who displease him often get shot (off-screen of course). Ironically, he can actually appear to be more easy-going at times than his underling Spigot. The keyword being appear, because the fact that Spigot and everyone else is continuously afraid of him let's you know he's one seriously bad dude. Unlike Spigot and Dunder, he speaks in a Russian accent the way most of his countrymen do.

A Running Gag in the series is the High Marshal always forgetting Spigot's name, usually calling him some other plumbing-related name like "Nozzle". 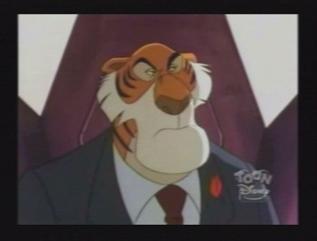 A stoic and highly powerful businessman, implied to have enormous power over Cape Suzette's economy. Like Baloo and Louie, Khan is swiped and anthropomorphized from The Jungle Book (1967). 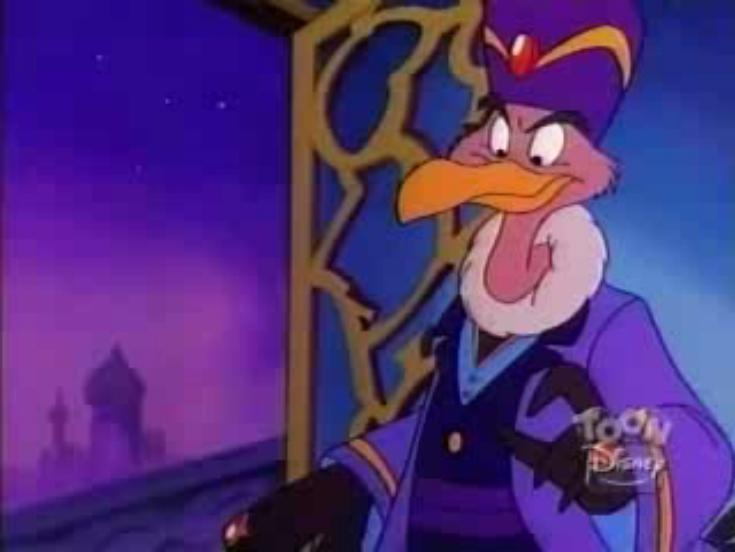 The adviser and chancellor to Lotta's father, King Amok, who is plotting to seize power for himself and force the Princess to marry him. He is a large and menacing vulture.

A diminuative crocodile who runs all the smuggling in and out of Cape Suzette. A recurring villain - Baloo runs across his bad side multiple times due to either blundering in the way of one of his schemes, or simply taking a payday that Moe thinks he deserves instead. 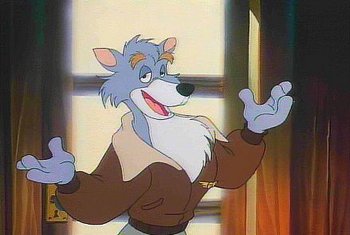 The Rival to Baloo when the two were in flight school together. Now an obnoxious Ace Pilot who flies top secret missions for the government who has entirely let his success go to his head, leading to trouble when a screw up of his gets Baloo stuck in the middle of a jam. Appears in "Mach One for the Gipper". 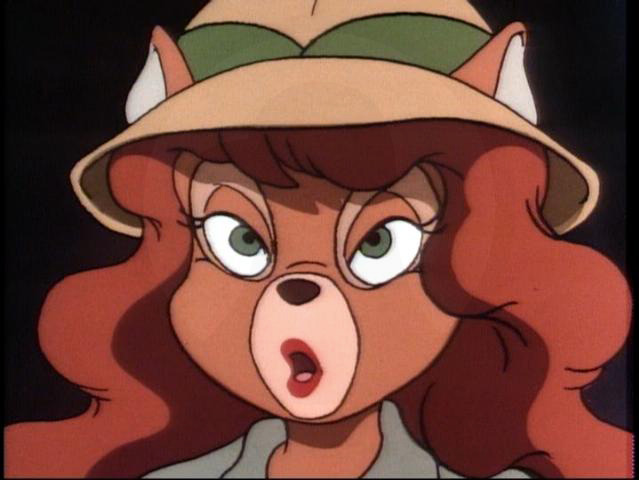 A One-Shot Character who became very popular with the fans, Katie is a feisty Adventurer Archaeologist who gets Baloo and Louie to help her find the lost city of Tinnabula. She appears in the two-part episode "For Whom the Bell Klangs".

Myra (aka Mira) the Archaeologist 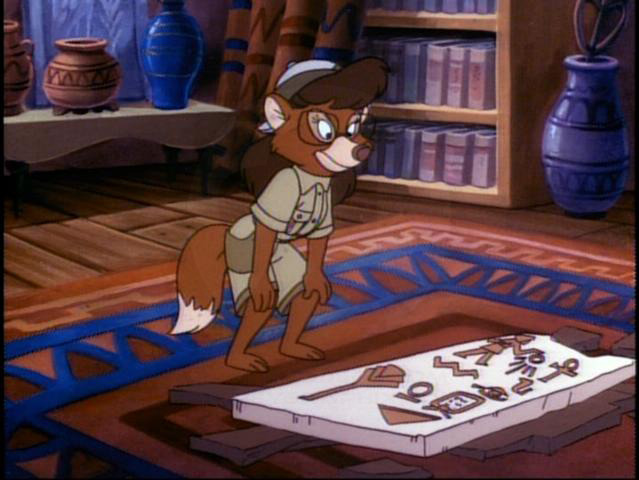 Myra is the Minister of Culture and eventual museum curator for the small desert nation of Aridia, as well as an Adventurer Archaeologist. During the episode "In Search of Ancient Blunders", Baloo and Wildcat help her defend the upside down pyramid of King Utmost from both a rampaging mummy and the Air Pirates. 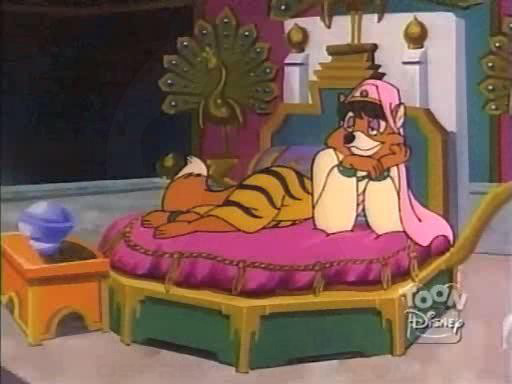 Lotta is the lovely, lively princess of the titular nation in "The Road to Macadamia", and she teams up with Baloo and Louie to save her beloved kingdom from Evil Chancellor Trample. 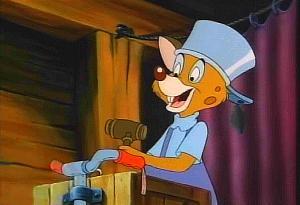 Kit's friend, a bucktoothed hyena boy and the self-proclaimed leader of the Jungle Aces Secret Midnight Club, a group of kids who are adventure enthusiasts. A thoroughly unpleasant little snotball, he appears in two episodes, "Captains Outrageous" and "Bullethead Baloo," although he has a much bigger role in his second appearance.