All of these characters were listed as potential candidates to be added as the fourth and fifth DLC characters to the original game as well as potentially being playable in any possible sequels (Except Juju). Many of them are either mentioned or appear in brief cameos during the story lines. Read here for full details of their stories and potential movesets.

Eliza won the first poll and became the third DLC character, with Beowulf winning the second poll to be the fourth.

Tropes that all of these characters have in common: 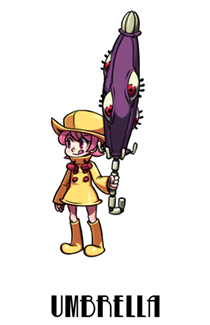 Parasoul's younger sister. Although Umbrella lacks the military protection and tactical finesse of her older sister, she does wield Hungern, a sentient umbrella that becomes more voracious and powerful the more it isn't used.

The second of the two characters originally planned to be in the original eight, but development was postponed in order to replace her with Valentine and Double instead. She ended up never coming out at all, her spot constantly going to other fighters, leaving her stuck on the sidelines. 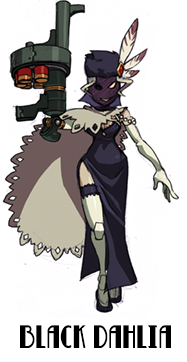 The Medici family's top assassin, she was the one who murdered Ms. Fortune's Fishbone Gang members and (with the aide of her henchwomen) cut Nadia Fortune into pieces (even though Nadia already swallowed the life gem). She and her henchwomen also ambushed a party the Contiellos were hosting — killing everyone there, including Squigly. An ex-member of the Anti-Skullgirl Labs. Her fighting style is based on deception and Hidden Weapons such as the foot blade, and she is the pioneer of a fighting style taught to the Medici female assassins, including Cerebella. 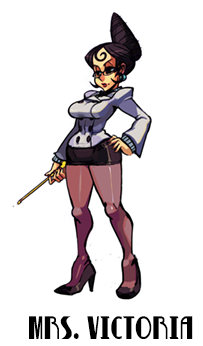 The tutorial lady. In-universe, she is a teacher at Filia's school. 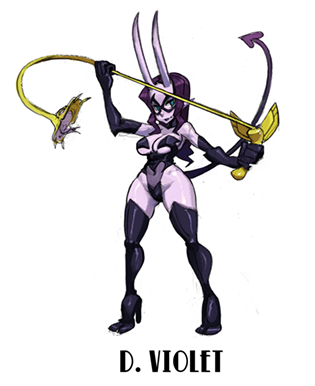 A Dagonian scientist who works at Anti-Skullgirl Lab 8 and a colleague of Dr. Avian, who helped in turning Patricia into Peacock. He is an ex-member of Lab 4, a lab that specialized in handheld weapons. He is also a sports buff.

A member and subject of Anti-Skullgirls Lab 8. A teenage girl who can be ill-tempered at times. She and Leduc are like brother and sister. She possesses the Synthetic Parasite Beezle Bomb.

A member and subject of Anti-Skullgirl Lab 8. A young hero type with a good heart, he and Hive are like brother and sister. He's an idealist, and wields a Synthetic Parasite, the Taranis Generator.

A member and subject of Anti-Skullgirl Lab 8. Disfigured during the war, she agreed to be grafted with the Synthetic Parasite, Salamander Shell. She is an old-generation ASG operative along with Big Band and the two have been involved in two previous Skullgirl events. Despite her horrific appearance, she is a kind motherly figure to the younger members of Lab 8.

The psychic second-in-command of Anti-Skullgirl Lab Zero. Along with Valentine, he is responsible for turning Carol into Painwheel and now exerts mental control over her to keep her stable. He also creates Robo-Fortune.

A product of Peacock's cartoon-loving imagination, Andy Anvil, along with others in her gang of cronies, was brought to life thanks to the power of her synthetic parasite, the Avery Unit. 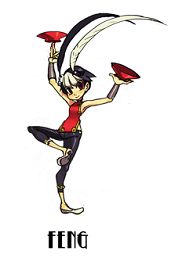 An acrobat in the Cirque des Cartes and Cerebella's roommate. She represents the Ace cards in the circus's playing card theme, and fights using her acrobatic style and the ghost birds on her head. 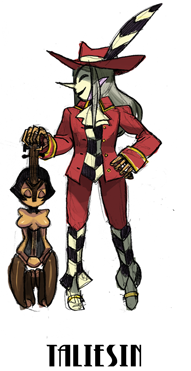 A bard in the Cirque de Cartes, he is based on the Jack face card. A handsome but extremely dark character, he has a violin-like Remote Parasite called Muse. His wooden fingers have the ability to turn women's souls into musical instruments which he enjoys collecting. His real fingers are inside Muse's mouth, which she never opens.

Hubrecht
A strongman in the Cirque de Cartes, he is based on the heart suit of cards. A good-natured gentle giant.
Regina
The domineering beast tamer at the Cirque des Cartes, she commands a wide range of creatures including several outlandish specimens. She derives no pleasure from her cruelty as it is simply in her cold nature to control others by any means necessary as she does indeed deeply care about her fellow performers. The troupe ultimately answers to Regina, not the ringleader. Her design is based on the Queen face cards.
Beatrix 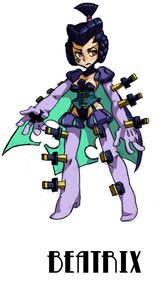 A magician in the Cirque des Cartes, she has the ability to store knives in her body without seemingly injuring herself. Not only are they rivals, Beatrix's bitter, jaded personality is a stark contrast to Cerebella's cheerfulness. Her design is based on the Club suit.

Ottomo
A member of the Medici Mafia family, Ottomo is Lorenzo's mechanical henchman and bodyguard. He's piloted by Tom, a tiny, foul-mouthed Dagonian engineer. Tom is an ex-member of Anti-Skullgirl Lab 4 and was a colleague of Stanley. Tom sold out to the Mafia and, before leaving, stole the M3 (Mighty Metal Man) unit from the lab. While Tom is a cigar-smoking, womanizing, ill-tempered drunkard when he's out of the suit (much to Lorenzo's annoyance), Ottomo is more refined.
Yu-Wan

Yu-Wan is a Dagonian chef and proprietor of a restaurant in Little Innsmouth. A friend of Ms. Fortune and Minette's employer.

Named after a minnow, Minette works as a waitress in Yu-Wan's restaurant in Little Innsmouth. Also a friend of Ms. Fortune.

Scythana
A gigantic half-Gigan who was arrested by the Black Egrets. She broke out.
Roxie

Mechanic for the Black Egrets.

Panzerfaust
A member of the Black Egrets, originally from Anti-Skullgirls Lab 3.
Adam

Full name Adam Kapowski, he is an elite member of the Black Egrets and Umbrella's babysitter. 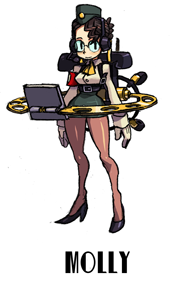 Communications Officer of the Black Egrets. 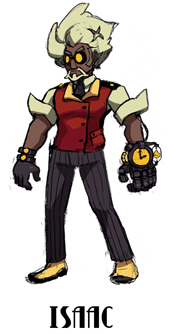 A mysterious man, by trade an archaeologist, who owns an equally mysterious device — the Time Glove — that allows him to jump back and forth through time. 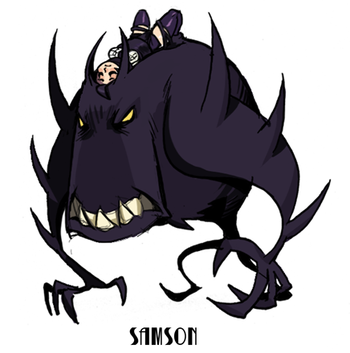 A "darker" version of Samson who has seized control of Filia's body.

The son and heir apparent of Lorenzo Medici, and the backer of the Cirque de Cartes. Cerebella sees him as a father figure.

One of the Medici's goons.

One of the Medici's goons.

Squigly's deceased father and the previous host of Levithan. When Squigly became a zombie he transferred Leviathan to Squigly, releasing her from the control of his wife Selene, the Skullgirl from 14 years ago.

Squigly's deceased mother and the Skullgirl from 14 years ago, predating Queen Nancy and Marie Korbel. During her birthday party, Selene was given the Skull Heart as a present from a mysterious stranger. The stranger was actually Double, who had told the Medici family that the Contiellos had possessed the Heart. The Medici family crashed the party and began killing the Contiello family, including Squigly. Surviving the initial assault, Selene wished on the Skull Heart to bring her family back to life and became the Skullgirl.

Gilgamesh
The ruler of the Gigan Nation, he wears a chain mail suit made of knives that stand on end when he flexes his muscles. He fought against Parasoul's father.
Grendel

Beowulf's rival during his heydey, Grendel was a Gigan wrestler that fought Beowulf during the time of the Great War, which eventually climaxed at Beowulf winning their final fight, killing him and ripping his arm off in the process. His mother was so distraught at his death that she lashed out against the crowd, forcing Beowulf to kill her too.

Juju
The former sniper of the Black Egrets who was initially supposed to be considered as a future DLC character. Unfortunately because her design sprang from a suggestion made by a fan who proceeded to be less-than-civil about the situation, she eventually became Exiled from Continuity.