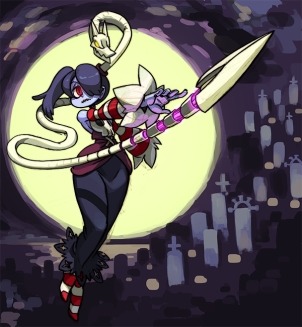 Squigly is the last "surviving" member of the Contiellos, a famous line of opera singers and long-time clients of the Medici family.

Fourteen years ago, tragedy befell Squigly's family when the Medici mafia came close to obtaining the Skull Heart, with Black Dahlia herself personally sealing Squigly's fate. During this incident she became one of the Skullgirl's undead minions. Once the threat had been defeated, only Squigly's body was recovered, and Lorenzo Medici himself paid for her funeral.

Fast forward to the present: Bloody Marie's emergence has awoken Squigly from her eternal rest. As part of the Skullgirl's undead legion, Squigly should have become nothing more than a mindless servant of the apocalyptic maiden. However, thanks to the powers of her Parasite Leviathan, she is spared this fate.

Squigly is graceful, calm and well-mannered, but tough and determined to complete her mission. Her past experience with a Skullgirl gives her a unique perspective and a greater understanding of the situation over most.

Having served the Contiello family for generations, Leviathan is refined and dotes on Squigly like her father and previous host did. This long familial history has made Squigly's bond with Leviathan deeper and more fundamental than that of most Parasites, and allows them to work harmoniously both in and out of battle like synchronized dance partners. Their unique circumstance also seems to have given them abilities beyond this world, as well.

Her birthday is November 2nd, and she was fourteen-years-old at death (making her technically twenty-eight). Her blood type is embalmed (formerly A-). Her official likes list contains Leviathan, her family, tradition, reading up on current events, animals (particularly birds and snakes), music, singing, noodles, cream soda, cake, burgers, gardening, the smell of incense, bubble baths, and not being dead. Her dislikes include the Medici Mafia, Black Dahlia, Double, the Skull Heart, rude people, uncivilized behavior, dishonesty, not taking karaoke seriously, thunderstorms, and being dead.

Squigly uses powerful charged attacks, long-range moves and a number of zoning attacks to mitigate her lack of movement.

The first of the two characters originally planned to be in the original eight, but development was postponed in order to replace her with Valentine and Double instead. Squigly was released with the PC version on August 22, 2013 and the PlayStation3 version of the Updated Re-release on February 11, 2014 and to Xbox 360 on July 31, 2014. 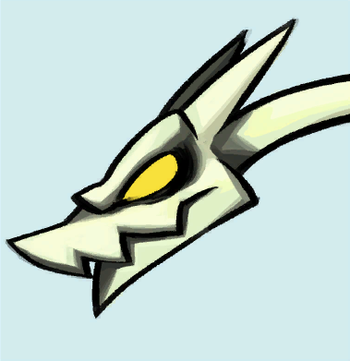 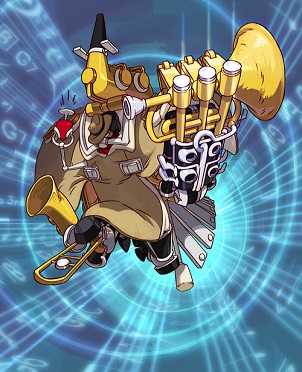 A Murderous Affair of Music
When the word of law falls, pick it up and hold it higher!
Voiced by Rich Brown (English) / Tomokazu Sugita (Japanese)

Ben Birdland has seen a lot in his time, including the worst of the Grand War — but nothing was worse than what he saw as a beat cop in New Meridian. When he ran afoul of his crooked unit he was given a violent early retirement, and his broken body was left to spend the rest of its days in an iron lung.

That would have been the end of Ben's story if it hadn't drawn the ear of the Anti-Skullgirl Labs. With little left to lose, he agreed to be rebuilt with their experimental procedures. Melded with the machinery that allows him to breathe and a powerful array of pneumatic weaponry, he was reborn as Big Band.

Now a senior member of Lab 8, he's become a father figure of sort to the younger ASG soldiers. A firm believer in their cause, he has stayed with the project through its controversies and still sees his place on the front lines against the Skullgirl. His technology may be dated, but he more than makes up for it with experience and fortissimo.

Big Band uses his huge size to his advantage, creating an insanely powerful and wide hitting opponent with a number of crushing abilities.

The second DLC and the cast's first male character. Like Squigly, he was funded by the fans through the Indiegogo crowdfunding event. Big Band was released to the retail version of the game on April 22, 2014.

He is called Sax-Deka (Detective Sax) in Japan due to the fans over there giving him the nickname before the game came out over there. 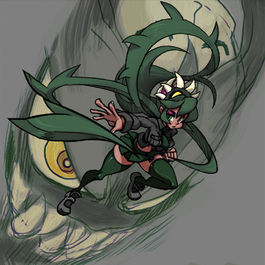 One of Brain Drain's less-socially-acceptable hobbies is cloning, and often he forces the souls of dead warriors to inhabit these clones.

Fukua is the result of a fortunate — or unfortunate — Lab Zero accident: a union of two souls. One, a once-proud warrior known for her brute strength in close combat; the other a silent assassin who specialized in ranged weapons for her kills.

Together as one, Fukua possesses the best of both specialties... but relationships formed under intense circumstances often don't last.

...That's the in-universe explanation. Out-of-universe, Fukua was originally a simple Palette Swap of Filia that the main UI person at Skullgirls created, but he accidentally made a typo when spelling her name. (Type Filia but move your right hand one key to the left to see why.) The fandom took and ran with it, creating an in-joke. She would later come to be an actual character on April Fools' Day 2014, as not only a way to celebrate said day but also to take a potshot at a reveal that happened a few weeks before. Consider her a prototype to Robo-Fortune.

Fukua, despite being a moveset clone, uses her distancing and projectile moves to create a deadly long-range fighter.

Her birthday and age are unknown. Her blood type is AB. She likes being Filia. Her official dislikes list contains being a clone, Filia, and Samson.

The third DLC Character. She was added to the game on PS3 and Steam on May 13th, 2014, as a hidden bonus character.

Eliza is the celebrity diva of New Meridian's premiere nightclub, Bastet's Den. Unbeknownst to the club's patrons, however, she's also been host to the skeletal Parasite Sekhmet for untold years. Widely known for her blood drive charities, in reality these serve to feed Sekhmet and maintain Eliza's ageless beauty. Recently discovered and blackmailed by the Medici into pursuing the Skull Heart, Eliza's ancient ambitions stir once more...

Her birthday is October 17, but her age is a secret. Her blood type is... any. Her official likes are beer, kushari, dolma, Old Fashioneds, board games (especialy Senet), bathing, dressing up, cats, sunny weather, dancing, singing, being in the spotlight, blood, conquest, and Samson. Her dislikes are human arrogance, prejudice against Parasites, plebians, missed opportunities, philanthropy, X-rays, living small, Trinitism, historical inaccuracies, unhealthy blood, losing her nose, and Samson.

Eliza uses her own body to create wide, sweeping moves to decimate her opponents at long range.

The fourth DLC character and first character voted to be added by the Indiegogo backers, Eliza was released into the game on September 29th, 2014. 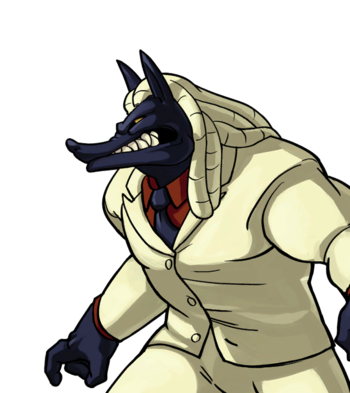 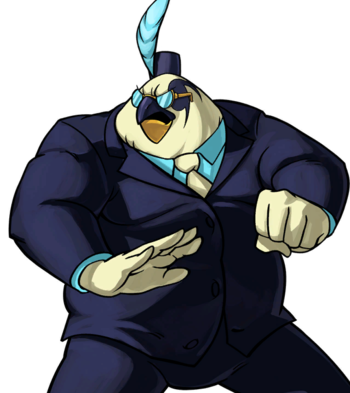 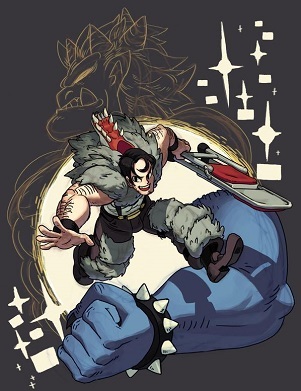 Known world-wide for felling the Gigan warrior Grendel and for his illustrious career in the ring, Beowulf had secured himself a spot in the history books as a champion. But a mediocre acting career after leaving the ring tarnished his legacy.

Now, as the Canopy Kingdom faces a new threat, Beowulf enters the ring once more, determined to relive the glory, and in doing so stumbles upon the truth about his past… Will Beowulf be able to overcome this new threat to the city and his legacy? Or is this his final taste of the spotlight?

Beowulf uses strong command grabs, a unique resource in "hype" and his trusty folding chair The Hurting to decimate foes and lock them down.

The fifth DLC character and the game's second male character. Beowulf was the second character voted by Indiegogo backers to be in the game, and was released on April 17, 2015. 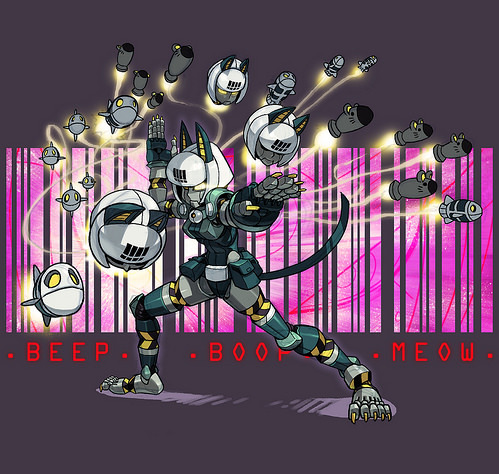 Mewtropolis: A Story from Days of Future Cats

Robo Fortune is the creation of Brain Drain, the psychic director of ASG Lab Zero, and stands as a testament to her maniacal creator's unmatched pride and petulance. Built to demonstrate loyalty and cunning, Robo Fortune fails to deliver either to any measurable degree. Employing cutting-edge technology, she sets out to hunt down the Skullgirl, and to engage in easily avoidable conflicts.

Is the ASG Project's latest creation the ultimate cybernetic soldier? Have Brain Drain's mechanical machinations set the world on a treacherous path? Is Robo Fortune's faulty programming more of a feature than a bug? Has science gone too far?!

Originally a Gag Dub by Ms. Fortune's voice actor, Robo-Fortune quickly became memetic among the players and staff. During the Indiegogo fundraiser a playable Robo-Fortune was announced as a last-minute stretch goal and was subsequently funded.

Robo-Fortune uses laser beams, mines, missiles and other distance-keeping tricks to bring opponents to their knees before ever reaching her.

The sixth and final DLC character funded by the Indiegogo campaign, Robo-Fortune was released on July 7th, 2015. 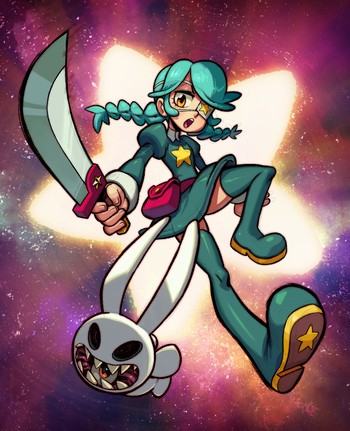 Who greenlit this?!
Let's make it flashy!
Voiced by Erica Mendez (English) / ? (Japanese)

Despite Annie's appearance, she is an old veteran fighter that has battled many previous Skullgirls, and her childish body is due to her parents wishing for her to be eternally young. Currently stars in a TV series in the Canopy Kingdom that warns of the dangers of the Skull Heart and the Skullgirl. Her rabbit doll is actually a remote parasite named Sagan, who holds her right eyeball in his mouth.

Annie was revealed as a brand new character coming to the mobile version of Skullgirls in 2020. However, she will also be added to the console version of the game sometime in 2021.