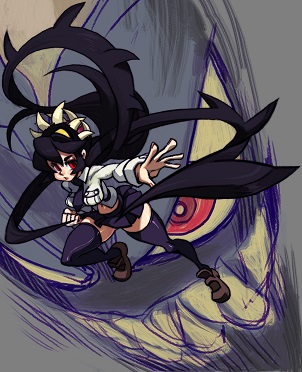 More or less the default protagonist of the game, Filia was once an Ordinary High-School Student, but one day woke up without any memories and a second mouth on the back of her head. Now, she hosts a Parasite named Samson, an unruly mop of demonic hair with incredible power. With no memories or anyone to turn to for help, if she ever hopes to piece together her past and survive the inevitable clash with the Skullgirl, Filia will need to trust this mysterious being.

Her birthday is March 18th and she's sixteen-years-old. Her blood type is AB. Her official likes list contains eating, coffee, milkshakes, reading and learning, radio dramas, comics, romance novels, and dogs. Her dislikes list contains Samson’s bluffing and gambling, seeing innocents get hurt, hair getting tangled, being lied to, and side effects of Samson's parasitism.

Her fighting style utilizes Samson to transform into a variety of different shapes using her hair for offensive and mobility purposes. 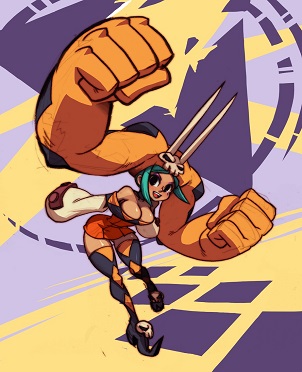 The Diamond in the Rough
Get ready for a show-stopper!
Voiced by Cristina Valenzuela (English) / Toa Yukinari (Japanese)

Throughout the Canopy Kingdom, Cerebella is admired for her enormous strength and alluring curves. Sadly, this acrobatic orphan only desires the attention of one man, the mobster Vitale Medici, who took her in and became the closest thing to a father she’s ever known. While inherently good, Cerebella serves the mafia as a leg-breaker when not performing in the circus. She is the only person capable of controlling her powerful Living Weapon hat, Vice-Versa, so Vitale is stingy with his affections to keep her fighting in his corner.

Her birthday is April 11thnote The date of the game's Xbox Live Arcade release (The PSN version was released a day before), and she's eighteen-years-old. Her blood type is B. Her official likes list contains competition, showing off, cats, professional wrestling, sudoku, flirting, pleasing Vitale, and teasing her roommate Feng. Her dislikes contain badmouthing of the Circus, badmouthing of Vitale, angry people, quitters, and cockroaches.

Cerebella uses the fists from her hat to move around the battlefield with huge leaps and bounds and to smash enemies into the pavement with powerful but slow strikes. 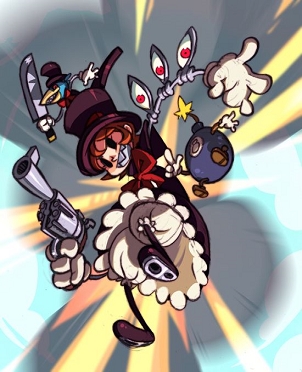 Once a war orphan slave named Patricia Watson, Peacock’s body was gruesomely mutilated by slave traders that captured her. She was rescued by Dr. Avian’s Anti-Skullgirls Labs, and rebuilt her with a (literally) reality-defying biomechanical arsenal: the Argus System augmented her body, and the Avery Unit gave her access to unprecedented weaponry. Alas, they couldn’t do anything for her mind: Peacock’s damaged psyche and abiding love of cartoons shaped her new “toys” into a terrifying gang of cronies, whom she has no qualms using to Paint the Town Red... with blood. Terrifying as she is, she may be the kingdom’s best bet against the Skullgirl.

Peacock uses the Argus System to its full advantage with her cartoon sensibilities, creating an entirely unpredictable fighter. 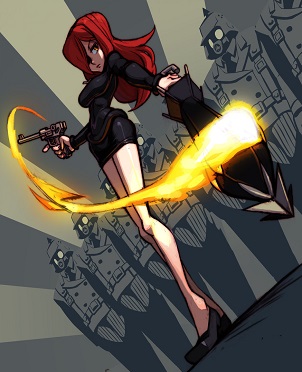 Few know the terrors of the Skullgirl as intimately as Parasoul does: seven years ago, her own mother became the Skullgirl that nearly destroyed the world. This tragic past has made her fiercely protective of both her country and her family, and these two priorities frequently come into conflict. Parasoul is now the crown princess of the Canopy Kingdom and leader of its elite military squad, the Black Egrets. Wielding the living umbrella, Krieg, she fights with grace, poise and cunning to defend her family honor and destroy the Skull Heart so no one can repeat her mother’s terrible mistake.

Her birthday is December 22nd, and she is twenty-five years old. Her blood type is A. Her official likes list contains logic, wine, chess, fencing, training, tennis, diplomacy, philosophy, Black Egret troops, secretly watching Annie: Girl of the Stars, and her younger sister Umbrella. Her dislikes contain overly emotional people, relying on othersnote Considering the use of her Black Egret troops, this is more than a bit ironic..., those who speak ill of her family, injustice, the Medici Mafia, the Skullgirl, and her sister’s antics.

Parasoul uses her umbrella and army of Egrets to keep opponents at bay with firearms and napalm shots, but is also capable of using her umbrella for powerful strikes up close. 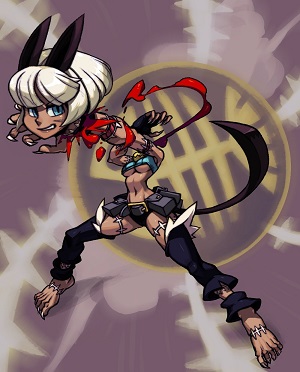 Nadia Fortune is the last surviving member of the Fishbone Gang, a band of otherwise Dagonian thieves, whose last caper ended in tragedy; in an attempt to steal the Life Gem, a valuable and mystical artifact, from Lorenzo Medici, all were caught by the Mafia and brutally killed... or so the mob thought. Nadia managed to swallow the Gem and gained immortality from it (or at least a near-infinite Healing Factor, which amounts to the same thing), which allowed her to survive the mob's vengeance — Dahlia and her goons chopped her into little pieces and dumped her in the river with the bodies of the rest of her gang. She now lurks in the shadows of Little Innsmouth, plotting her own revenge against the Medici Mafia.

Her birthday is November 24th, and she is twenty-years-old, and pretty much stuck at that age. Her blood type is B. Her official likes list includes making friends, sunlit naps, volleyball, bowling, golf, parkour, subjecting others to terrible puns, Yu-wan's restaurant, Dim Sum, the Fishbone Gang, robbing from rich, giving to poor, and potato chips. Her dislikes contain the Medici Mafia, Black Dahlia, sushi, cops, bullies, marsupials, loud noises, and lemonade.

Ms. Fortune uses lightning quick strikes and high mobility to her advantage, and can even detach her head to create some devastatingly fast mixups. 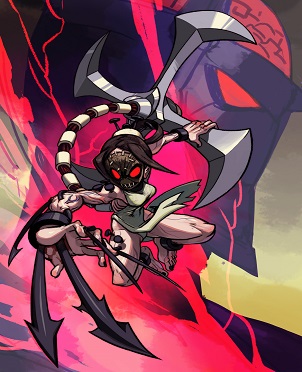 The Pain of Painwheel
Get out of my head!!
Voiced by Danielle McRae (English) / Izumi Kitta (Japanese)

Once, she was a normal schoolgirl named Carol, who was kidnapped by Valentine and delivered to the Anti-Skullgirls Labs’ secretive Lab Zero. There she was implanted with the synthetic Buer Drive and Gae Bolga Matrix parasites and infused with experimental Skullgirl blood, transforming her into the monster she is today. Violent and unstable as a result of these experiments, as a precaution she’s mentally controlled by Lab Zero’s powerful psychic director, Brain Drain. Fueled by rage, she draws her power from her pain and fury. Despite that, the soul of that scared young girl still lives on inside this monstrous body, desperately fighting off the onslaught of voices that would control her.

Painwheel couples viciously powerful strikes with high mobility and movement, allowing her total control of the space around her. 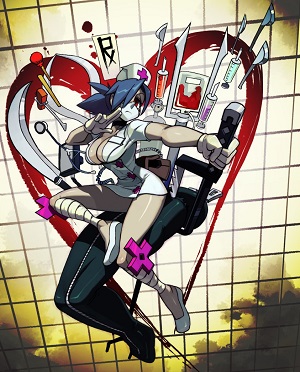 The Bloody Valentine
Side effects may include nausea, headaches, and death.
Voiced by Laura Post (English) / Asami Imai (Japanese)

Valentine is the only survivor of the Last Hope, a group of special Anti-Skullgirl Lab operatives. Before meeting their end at the hands of the Skullgirl, the Last Hope worked for the mysterious Lab Zero and performed duties ranging from reconnaissance and sabotage to advanced research.

Now Valentine dutifully serves the Skullgirl, carrying out her will from the shadows. She keeps to herself, so much of her true nature and personality are unknown.

Her cross colors were altered on the PS3 and Steam in the May 13th Patch, as an added bonus when Fukua was added to the roster.

Valentine combines quick strikes, powerful command grabs, a unique resource in several different kinds of poison and the ability to bring dead teammates back to life to create a complicated but deadly fighter. 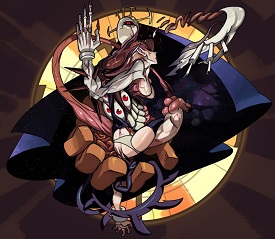 Double’s origins are a complete mystery. Seemingly without a will or motive of its own, this formless monster aids the Skullgirl.

Double is capable of transforming its nightmarish form into that of any person, but often appears as a smiling nun. She can frequently be found in the Grand Cathedral of the Divine Trinity, listening to confessions and attending to the catacombs beneath.

Her birthday, age, and blood type are all unknown. Her likes and dislikes lists both simply read "nothing".

Double uses mirror images of other characters in the cast to create a powerful and unpredictable fighter. 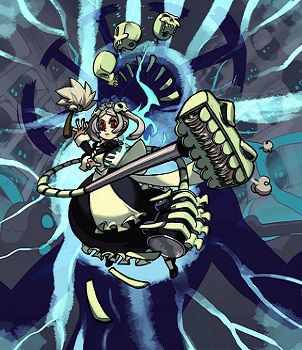 This is the End of the Road
I'll sweep you up.
Voiced by Kira Buckland (English) Nao Touyama (Japanese)

Marie Korbel, the game's Final Boss, as well as the title character. A maid with a skeletal motif.

She and Peacock are from Rommelgrad, a town in the No Man's Land. They were both captured by the Medici slavers, and sometime after Peacock was disfigured by them, Marie somehow managed to escape and find the Skull Heart. She wished for revenge on the men who hurt her friend. Remarkably strong willed, she is able to hold off the influence of the Skull Heart, using her powers as the Skullgirl to enact revenge on the mafia.

Her birthday is April 3rd, but her blood type and age are unlisted. She likes Patricia. Her dislike list contains The Medici Mafia, and the slave traders who mutilated Patricia when she was a slave.

The Trinity
The figures at the center of one of the Canopy Kingdom's major religions. Also the beings that Double speaks for to issue orders to Marie. Seem to consist of two sisters: Aeon, who controls time, and Venus, who controls space, as well as their enigmatic "Mother", Queen Lamia.

Skull Heart
Down here 'neath the sheets
The world is yours to conquer
Won't be long, dear
I'm the king and you're the pawn
We're a perfect pair
Voiced by Cristina Valenzuela / Cassandra Lee (English) / ? (Japanese)

The Macguffin everyone's after. A mystical item that can grant any wish, but if the wisher's heart has any slight bit of darkness, it will take over their body and claim it as its own for its own destructive ends.