This is a character sheet for the Fighting Fantasy gamebooks. Fortunately for the world of Titan, and for You, The Hero, villains are not the only forces active. You will find many benevolent beings willing to dispense knowledge, intel, and lend you a helping hand. From the Big Good to the Required Party Member and the neutral ruler more than willing to reward you if you save their land from the Big Bad, they all find their place here. It is under construction and any contributions are welcome!

Given the nature of the gamebooks, any vital plot-relevant twists should be kept under spoiler tags.

You! Yes, you over there, browsing aimlessly through TV Tropes! Don't you wanna do something more exiting? Don't you wanna be The Hero? Well now you can! Grab your sword and come with us to Titan, it's time to kick some major Big Bad butt!
The Hero
Although you play a different hero in every gamebook, with a few exceptions, and although they rarely have distinctive characteristics to enable identification, there are common traits between them all. Here they come...
Advertisement:

Travelling Companions and other heroes

The many Required Party Members and Guest Star Party Members that take part in your adventures and brave all sorts of perils alongside you, quickly becoming your Fire-Forged Friends, and even True Companions for the former. Also includes a Hero of Another Story or two, provided they have strong plot relevance, but excludes the characters who recruits you for the adventure but die very soon without accomplishing much, leaving you on your own. 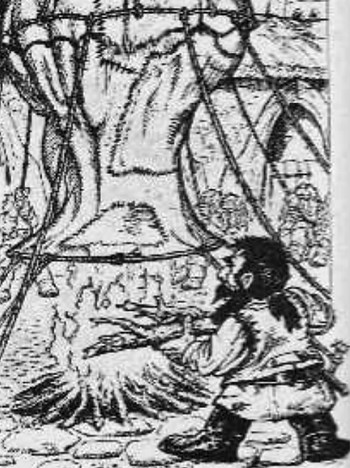 A jolly good dwarf you meet in your quest, and the local inventor of the hot-air balloon which proves priceless to reach your destination. In addition to his invention, he is a powerful fighter and an invaluable ally, whose constant good mood provides welcome relief in the grim adventure. 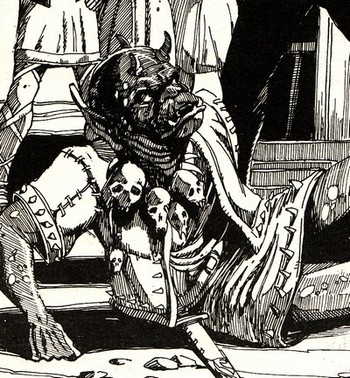 Appears in: Creature of Havoc

A friendly half-orc you encounter on your quest to stop the evil Necromancer Zharradan Marr. You save him from getting pummelled to death by an angry villager, and he tags along with you for a while. Little do you both know that he carries something vital to your quest...

Appears in: The Port of Peril

A very powerful kunoichi (ninja woman) and all-around Action Girl of multiple talents, whom you meet and befriend in your search for the Ring of the Burning Snakes. Together, you learn of the upcoming return of the Night Prince Zanbar Bone, and set out to send him back to the darkness where he belongs.

Hikaaz Mandera
Appears in: The Gates of Death (posthumously)

A brave and skilled adventurer whom you hear during your travel to bring the antidote of the Demon Plague to the Invisible City for mass production, who set out to destroy the Big Bad causing it. He preceded you wherever you go, But got killed by a mercenary sent by Lord Azzur for the same goal. While you never meet him in person, his successes and discoveries, and even what you find on his corpse, provide vital clues to save Titan. 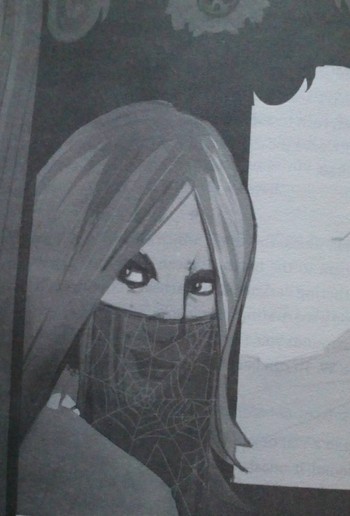 Appears in: The Gates of Death

A young noble lady and a scholar who ventured into Port Blacksand looking for the Legendary Mage Arakor Nicodemus, hoping he could help against The Virus that threatens to turn everyone in Titan into bloodthirsty demonic monsters. She offers you a ride to Salmonis, making you travel easier. 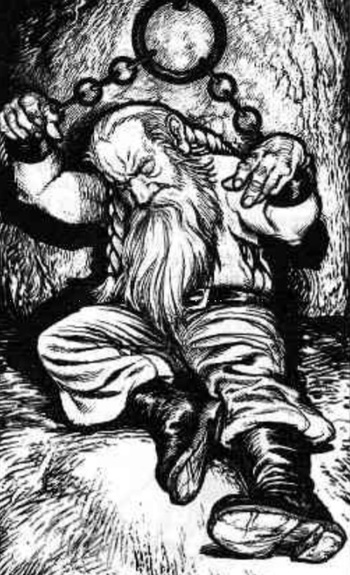 Not his best day, but don't worry he gets better.
Appears in: Eye of the Dragon

You meet this young dwarf in a dungeon deep below Darkwood Forest, searching for a priceless golden dragon statue for a dubious man named Henry Delacor. You rescue him as Delacor was holding him captive, and venture with him. He happens to be the nephew of Bigleg, the dying dwarf who urged you to find the Magic Warhammer in The Forest of Doom. 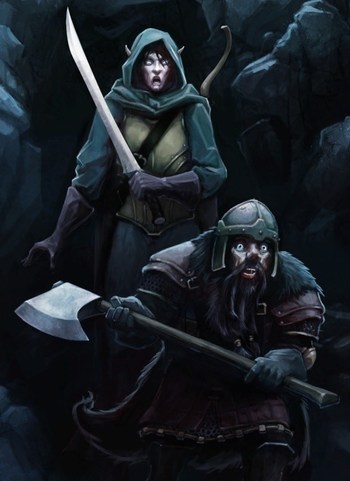 Picture from the computer adaptation. They look strange because they are zombie-clones instead of the real deal.
Appear in: Caverns of the Snow Witch

Two former slaves of the titular Snow Witch, bearers of the Slave Collars, whom you meet in the chaos ensuing your destruction of the witch, deciding to escape together. But you will find out the hard way that things are not as easy as they seem... 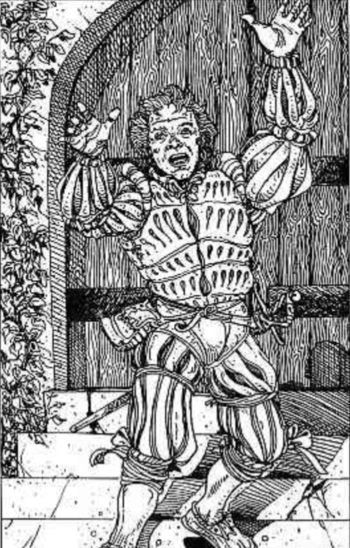 The son of the Lord of Margrave, Reinhardt has been aware of his father's constant trust and attention towards you for a long time. Nevertheless, both of you maintains quite a stable, acquaintance-like relationship, until the sudden murder of the Lord of Margrave and the arrival of Mencius the Mage throws the two of you into an adventure literally out of your world. 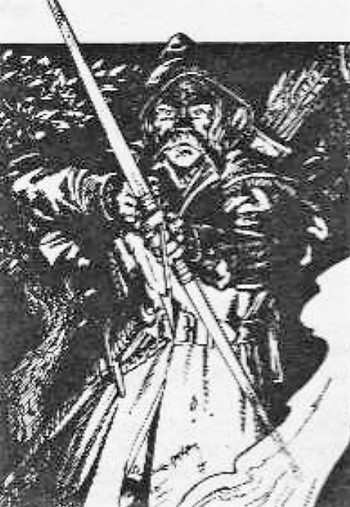 You meet this aloof but noble man one night after retrieving the Big Bad's Evil Weapon, as he offers you his help as an apology for mistaking you for an agent of Chaos. Warrior, archer, tracker and hunter, you will find his many talents considerably useful.

Borri loves to comment and joke about pretty much everything that happens.
Throm 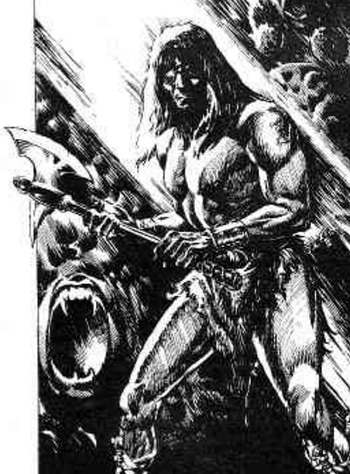 One of the five contestants of the infamous Trial of Champions, the labyrinth filled to the brim with traps, monsters and all sorts of nasty stuff, of which the one who could escape it would gain no less than 10000 gold coins from his creator Baron Sukumvit. No one ever succeeded, and as you make your way and the other contestants find gruesome ends, you befriend this powerful barbarian. But only one of you can get out and pocket the reward... 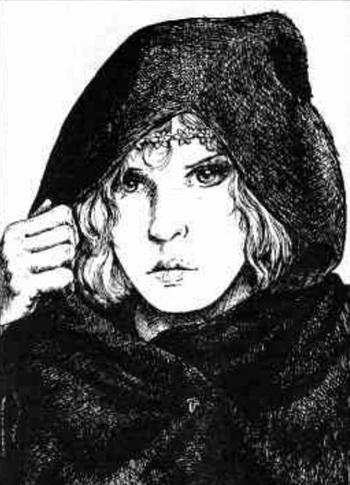 You meet this young elf warrior woman in an inn, when she asks you for her help in slaying Lord Mortis's wife Lady Lotmora. Whether you help her or not on this Side Quest is up to you, but doing so would earn you much good and later help.

Jesper
Appears in: Master of Chaos

Your first and only non humanoid companion of the franchise, Jesper is a talkative mongoose with impressive street-smarts. You buy him from a disgruntled owner and he travels with you towards the Very Definitely Final Dungeon, though he chooses to stay with nomads. 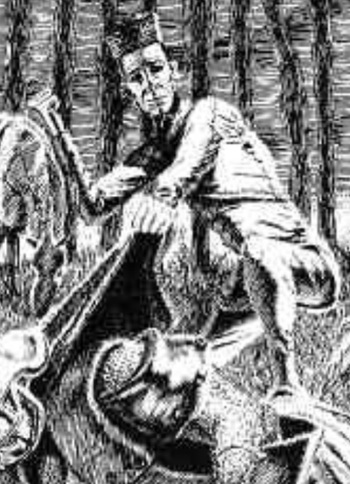 Hint: He is not the soldier getting curb-stomped.
Appears in: Black Vein Prophecy

As the armies of Feior are laying waste on the Isles of Dawn, the Fantasy Counterpart Culture of Medieval China, you meet this strange man who is attempting to rally the commoners to challenge the king for better social justice. As you rise against Feior, you befriend him and gain the help of his followers, without whom you cannot win the upcoming war. 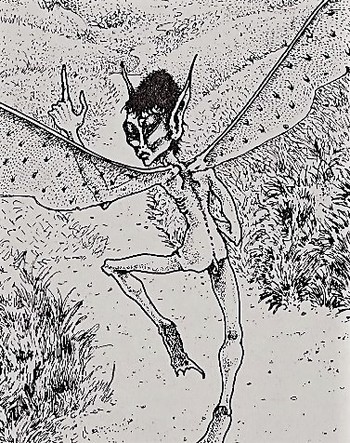 Jann is a minimite, a fey being with enormous Anti-Magic powers preventing any magic and spell to work around him. He takes a liking to you and starts accompanying you, and while genuinely friendly and rather pleasant to be around, in a adventure that has you playing as a powerful wizard his abilities are an endless pain... somewhere. 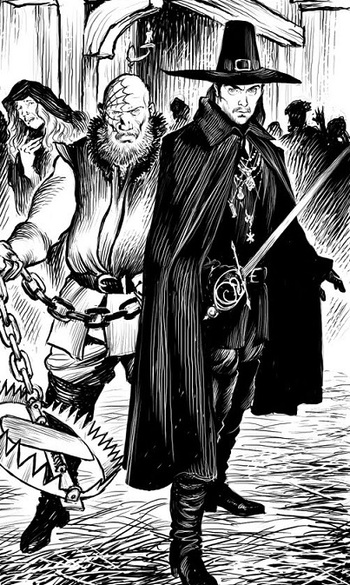 The classy gentleman is Van Richten, the hulking brute is his aid Streng
Appears in: Night of the Necromancer

A noble and elegant gentleman and adventurer, working with his companion Streng as Ghost Busters, albeit more seriously that the example that just popped the mind of anyone reading this. A bit too seriously in fact, since he is a Knight Templar out to destroy any ghost he sees without bothering to know whether they are dangerous or not.He is the brother of the Vampire Hunter from Howl of the Werewolf, with whom he shares the taste for black clothing and hats, not to mention the Black-and-White Insanity. 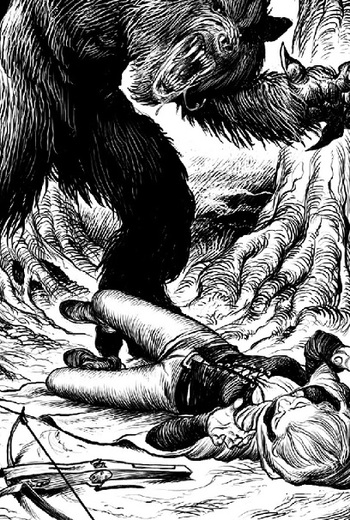 Not in her best day, granted, but hey try to fight that huge beast...
Appears in: Howl of the Werewolf

A young and talented huntress of monsters belonging to the mysterious order of the Crimson Cloak, whom you befriend after saving her from the mysterious werebeast plaguing the land. She then goes with you to uncover the beast's human Secret Identity and track him down to destroy him for good.

Ulrich
Appears in: Howl of the Werewolf

Just as you are about to get mauled to death by a huge black wolf, you are saved by this friendly woodsman. Alas, it was in fact a werewolf and you must then escape the curse. Ulrich then takes you to the wise woman Grandmother Zekova, who knows how to lift the curse. 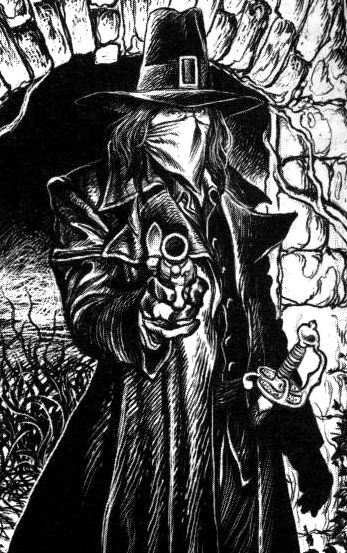 Appears in: Howl of the Werewolf | Night of the Necromancer (mentioned only as his brother takes the stage)

You meet this black clad Vampire Hunter, who strangely lacks a first name, on your way to the Tower of Maun. He is a powerful warrior with a nasty case of Black-and-White Insanity, whom you meet on your quest to break the curse of lycanthropy afflicting you. He offers you to join forces against Countess Isolde of Maun, but you can refuse and go alone.

He has a brother, Josef, working as a Ghost Buster, and as much of a Knight Templar. 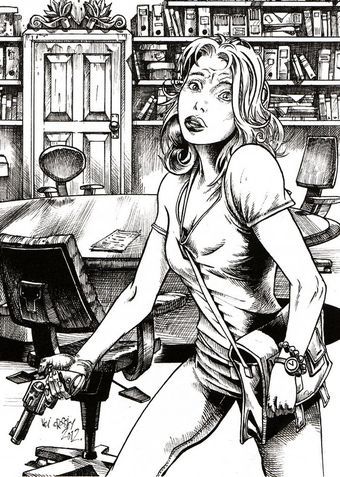 Appears in: Blood of the Zombies

Amy was an innocent and lively young woman from New York, who travelled to Romania and was hired as a cook by the demented aristocrat Gingrich Yurr. At first, everything was fine, but she soon started to suspect that something was amiss. Indeed, her boss was engineering an army of Plague Zombies from captives abducted all over the country, intending to unleash a Zombie Apocalypse. The poor girl was chased through Goraya Castle by ravenous undeads, until she meets you, the latest captive who run away, and together you resolve to put an end to Yurr's madness, along with his wretched life.