This is a page for the villains of the Fighting Fantasy universe, fought in the Old World: one of the three continents of the world of Titan. It is the only continent who escaped the sheer devastation brought by the Chaos Wars, due to a powerful ritual destroying the Legions of Hell before they could strike. It is the Fantasy Counterpart Culture of Medieval Europe, with many an Überwald settings in the Grim Up North.

Given the nature of the gamebooks, any vital plot-relevant twists and weaknesses (especially weaknesses) should be kept under spoiler tags.

The Archmage of Mampang 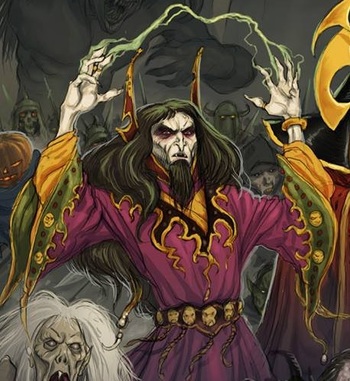 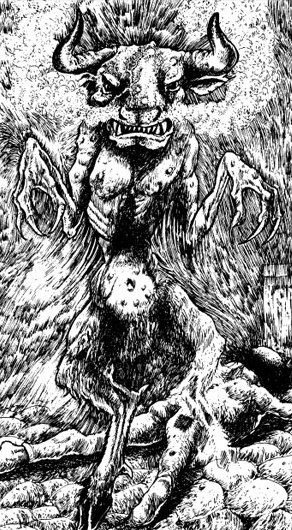 The mysterious Big Bad of the four-tomes spin-off Sorcery, who established his dominion over the Kakhabad: The Vermin Pit at Earth End, a desolate wasteland plagued by monsters and evil. He got infamous for killing a Kaiju-sized Seven-Headed Hydra, reanimating each heads into the Seven Serpents, and for building the gigantic and unassailable Mampang Fortress.

He sent his men steal the magical Crown of Kings, which makes its wearer a great ruler, worn for a few years by every monarch in the Old World wears before being passed to the next. The Archmage intends to use the crown unite the entire Kakhabad into his own kingdom. The king of Analand, who had the crown when it was stolen then hires you to take it back, and put an end to the Archmage’s blight...

The Archmage is markedly different in the Inkle IOS adaptation, with a more developed background and different personality, powers and motives...

The Archmage is the same ambitious Sorcerous Overlord who steals the Crown of Kings to establish a kingdom, then The Empire. Yet he is said to be over a thousand years old, prolonging his lifespan with magic. He learnt magic from the previous archmage, the Grand Witch Valiquesh and betrayed her, sealing her in her magical Book of Prison. He fell in love with a young seer named Bria and they lived happily, until the fated day when she made a prophecy foretelling his demise. Enraged, he killed her and took all sort of precautions to avoid his fate. But centuries later, you enter the picture...
Count Reiner Heydrich 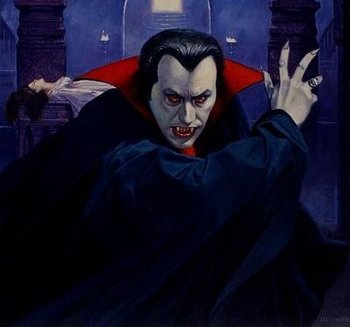 Fighting Fantasy's answer to Dracula himself, and one of the few villains to be featured in more than one gamebook. Reiner Heydrich killed his elder brother Siegfried to rule Mortvania, a domain of the country of Mauristasia, in the northern reaches of the Old World. He set an awful reign of terror, that worsened after he became a vampire. He frequently abducts young boys and girls to drink their blood, and you are tasked to save his last victim and take him down...

In the second gamebook, he is resurrected decades after his demise, by three Wicked Witch sisters, and his ambition now threatens the entire continent. But with another hero on his tracks... 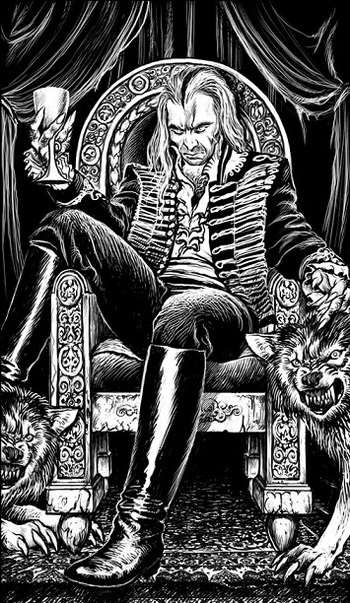 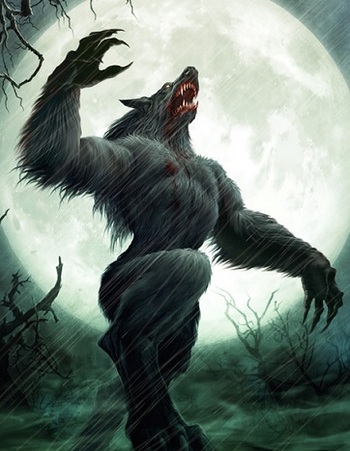 A depraved Feudal Overlord from the Überwald country of Mauristasia, who founded the Cadre Infernal with equally morally bankrupt nobles and made a Deal with the Devil. He became an Arch-Lycanthrope and ruled with an iron fist, turning his domain of Lupravia into a grim hell-hole plagued with were-beasts. Until an adventurer cursed with Lycanthropy by his younger brother, the Mad Prince Garoul Wulfen, resolved to slay him to free themselves of his curse... 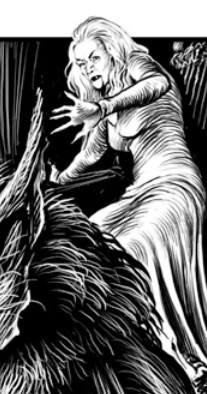 A depraved noble lady who joined Count Varcolac Wulfen's Cadre Infernal, making a Deal with the Devil. Countess Isolde and Count Varcolac were the only one to actually gain from the pact and she became a Vampire Monarch. While she has lesser plot relevance than the Count, and serves as his (reluctant) vassal, she remains a powerful and dangerous threat. Unless an adventurer trying to lift their curse of lycanthropy can change it...

See his entry on the The Pit page under The Snake Demons, Rulers of the Pit

See his entry on the Pit page under Night Demons and other Demon Princes. 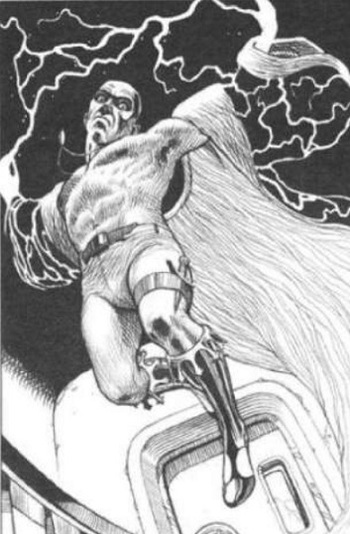 A powerful Weather Mage who was part of the High Council of Wizards of Chalannabrad, capital of the Kingdom of Femfrey. Until his unethical and dangerous experiments got him banished, that is. He built the Eye of the Storm: a huge Steampunk flying ship from which he can control the weather, and allied himself to the warlord Khaddan Khan from the neighbouring kingdom of Lendleland, threatening the entire continent with his yearning for revenge. But destroying the village of Vastarin attracted the attention of the Hero of Tannatown, an adventurer famous for many victories against evil swears to enact justice... 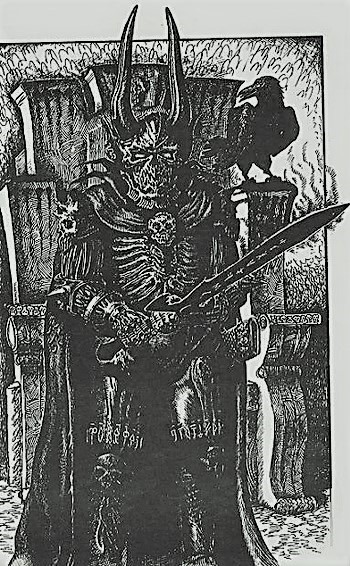 Appears in: Knights of Doom | Night of the Necromancer (mentioned)

A monstrous, undead, sorcerous Chaos Lord, and one of the franchise's worst SNK Bosses. Belgaroth was once one of the Knight Templars of the Warrior God Telak, younger brother of King Chivalras IX of Ruddlestone, but he forsook both his brother and his god in his lust for power. He established his own Templars in the name of the Dark Gods, the Knights of Doom. His initial attempt at taking over the kingdom resulted in the gruelling Crusade Against Chaos, ending with his death, pierced by the legendary hero Sir Rhyaddan with the Elven Spear Aelfgar. Alas, after a hundred years, Belgaroth has returned from the dead and amassed another army and new followers, intending to steal the throne once more. But he shall find another paladin on his path... 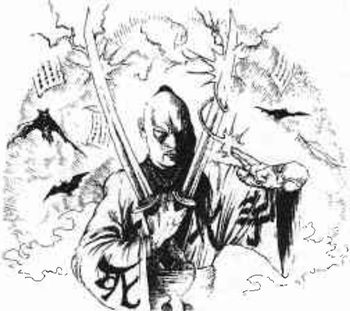 The ruthless Inquisitor General of the kingdom of Brice, who rose to infamy during the gruelling War of the Four Kingdoms, by becoming a war criminal of the worst kind. He is now wanted all over the continent of the Old World, though presumed dead. Alas, not only is he still alive, but he secretly rebuilt a considerable power base, exerting his influence all over the lawless frontier-town of Blackhaven that links the nations of Gallantaria, Brice and Mauristasia. There, he controls pretty much the entire underworld and plots in total secret to restart the war. Peace cannot truly exist with him out there, but there is one Bounty Hunter determined to bring him to justice, whatever it takes...

Karam Gruul might look like your typical Evil Sorcerer and Evil Genius who must be taken down, but light-years beyond your usual High Fantasy quest, you will find yourself neck-deep in a nerve-wracking detective story, that would not be out of place in a Film Noir. You cannot prevail here without stealth and guile... 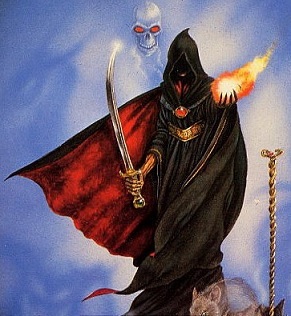 An evil Archmage of considerable influence, feared all over Titan. He is waging war against the benevolent mages of the city of Pollua, the only obstacle standing between him and his goal to Take Over the World. His agents recently abducted the wizard Alsander, who had just discovered crucial intel on Mordraneth's Evil Plan. As such, Vanestin, the Great Mage of Pollua and Mordraneth's Archenemy, sends you to the Isle of Despair where Alsander is held captive, to save him and use his knowledge in the war, and ultimately slay Mordraneth himself before it's too late. To a warrior like you, such a challenge is quite welcome...

It Was a Dark and Stormy Night when you first met this crafty fellow. Who were you to refuse when a seemingly friendly stranger offered you shelter in his campfire, then suggested to take shelter in the nearby abbey when the storm broke out? Little did you know that he used you to invite you in, for no evil can enter uninvited in Rassin Abbey, where the Black Grimoire is kept away from dark forces. And of course, he steals it and disappear. Turns out that he was an orphan raised by the monks of the abbey, who despite their tutelage became an Evil Sorcerer, worshipper of the evil Goddess of Sorcery Shekka. Nazek plans to use the Black Grimoire to release the Kurakil, a demon equal to the Demon Princes. It is up to you to make up for your mistake, to find him, and thwart his schemes before it is too late...

See his entry on the Pit page under Demonic Generals. 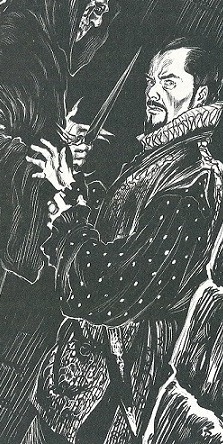 Appears In: Night of the Necromancer

One of the few Fighting Fantasy villains whose identity is a mystery that must be unveiled. You play the Lord of Valsinore, one of the illustrious Templars of the Warrior God Telak, who returns to your domain after a three-year-long crusade against a Death Cult in the Überwald neighbouring land of Bathoria. As you reach your castle, you are ambushed and killed by a cultist, and now, you are a ghost who has until the night ends to wind out who could order your death.

It soon becomes clear that this is more than the doing of a revengeful survivor. The cult is still fully in action, plaguing your beloved domain with evil forces. You then swear to unmask the mysterious, titular Necromancer who truly leads the cult, and settle your score with him for good... 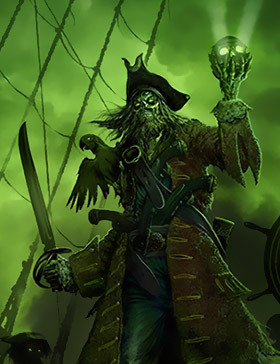 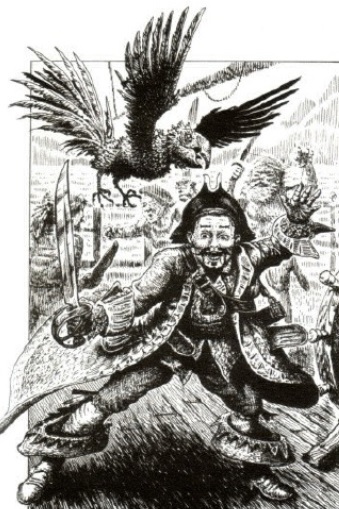 A vicious, murderous pirate who terrorises the seas of the Old World, most notably the Diamond Sea and the area around Port of Crabs. He and his crew are voodoo cultists, and followers of the evil Death Spirit Quezkari. By the time Bloodbones rolls around, the law has caught up with him and Captain Cinnabar was killed, or so it seems. Returning as an undead, Cinnabar resumes his reign of terror, and plans to achieve Complete Immortality through voodoo magic. But that's without counting without the Roaring Rampage of Revenge of a former victim... 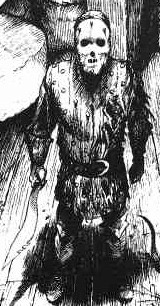 A Man-Orc city guards with a bad attitude and currently on the pay book of Gruul and his Brotherhood, Conrad hides a startling secret: normally nothing more than a corrupt brute, he's actually the undead and unstoppable Serial Killer known as the Maniac Guard, a restless hulk who wanders the streets hiding his face with a steel mask and brandishing a massive machete, spontaneously reviving when killed. 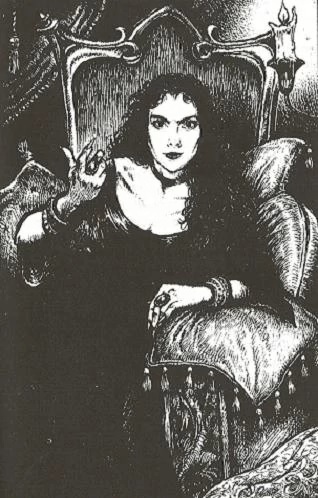 The younger sister of the Vampire Lord Count Reiner Heydrich, as evil, ambitious and dangerous as he is, serving as a major villainess in the gamebooks of which he is the Big Bad. She is a very powerful Wicked Witch who uses Blood Magic to retain her youth and astonishing beauty. In the first, she lives in luxury, keeping a (mostly) cordial relationship with her brother, and has equal plot relevance. In the second, she is resurrected as a vampire to serve as his second-in-command, and her role is drastically reduced.

See his entry on the Pit page under Night Demons and other Demon Princes. 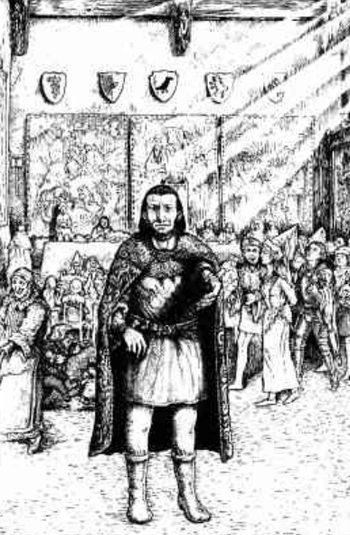 Appears in: Knights of Doom

A mysterious traitor whom you only hear about in the right circumstances. By meeting with the ghost of your friend Sir Connor. A member of the court King Rannor and a fellow knight, but a secret vassal of Belgaroth, who recieved the power to turn into a raven to better spy the land and report his liege without suspicion. Should you fail to unmask him, it may be too late... He is in fact Taris Varen, Lord of Cleve Manor, whom you befriended (or so you think).

See their entry on the Pit page under Demonic Servants.