The three best students of the powerful dark wizard Volgera Darkstorm: Equals in power, abilities, ambition and malevolence, they quickly became friends and rivals, choosing their collective name themselves. The more they learnt, the more blatant their evil became, frightening even Darkstorm himself. The ageing wizard tried to limit their learning and exert a calming influence, but in turn they felt he had nothing left to teach them, so they killed him with a Rain of Knives Spell. They ransacked his library and belongings, shared the loot and parted ways, entering a (not so) friendly competition to see who would take over Allansia first.

In a way, they can be regarded as a collective Evil Counterpart to the Star Pupils 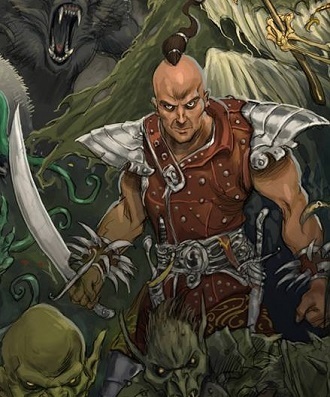 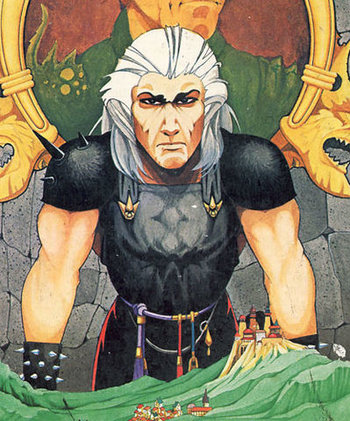 Appears in: The Citadel of Chaos | The Trolltooth Wars

A powerful wizarding warlord who rules the cursed kingdom of Craggen Heights, from the imposing Black Citadel. His ambitions of conquest would see the rest of Allansia fall under his sway. Balthus Dire comes from a long line of powerful Sorcerous Overlords. Right as he returned from his studies, he killed his father to take the throne for himself. To this days, he maintains a strong rivalry with his former fellow apprentice Zharradan Marr. As the best student of the best Wizarding School of Titan in the Forest of Yore, you are the only one who can stand against him... 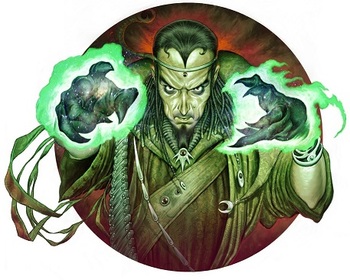 Click here to see him as a Demon Warlock 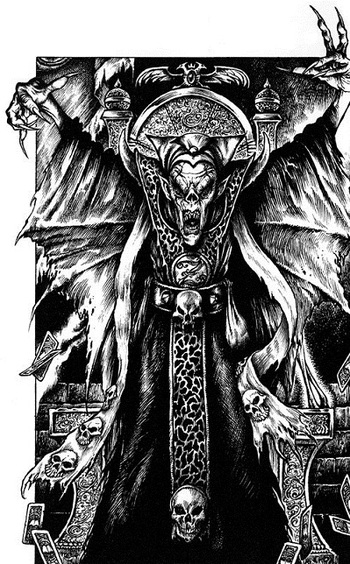 The Warlock of Firetop Mountain: the first and most iconic Big Bad of the franchise (though how evil he is varies from book to book). After completing his studies, Zagor invaded the caves of Firetop Mountain, driving away the dwarves living there and taking over the subterranean lair that once belonged to his great-grandfather, claiming his ancestor's riches and the dwarves treasures while he was at it.

Zagor has returned from the dead twice and appears in more gamebooks than anyone other than the Legendary Wizard Gereth Yaztromo, being the only Big Bad fought thrice. And always confronted by a hero...

In the first two books, he is a pretty by-the-book Evil Sorcerer, in the third however, he is dragged to Titan's sister world of Amarillia, where he fuses with a Demon Lord called the Bone Demon and becomes a tremendously powerful Demon Warlock, more evil and dangerous than ever. He took over the remnants of the Bone Demon's army, and based himself in Castle Argent, the former royal residence devastated by the war, waiting for his transformation to be complete and make him unstoppable. But one of four chosen heroes sent by the Boy King Irian, warned by Yaztromo, will stand in his way no matter what... 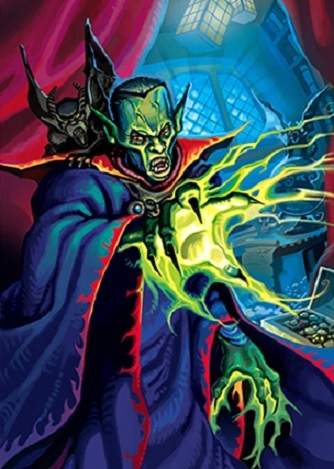 A half-human half-demon necromancer, expert in the vile magical art of Marrangha. After his studies, Marr built himself a subterranean lair and by chance discovered a gold mine that made him enormously wealthy, funding his rule. Marr later learnt about Eren Durdinath, the Hidden Elf Village of the highly magical white-haired elves, and the divine spirits known as Vapours spawned by their queen. He covets the Vapour of Elven Magic, which would make him virtually invincible, and seeks the village and learn all its secrets. Oddly enough, a strange, reptilian humanoid monster without reason or conscience is the only thing standing in his way...