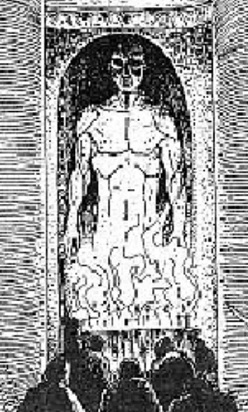 One of the three Primal Deities birthed from Arn at the very Beginning, Elim along with Ashra and Vuh created the Planes of Existence, with him creating the Magical Planes, and spawned the Young Gods. Elim however, soon disagreed with his siblings, stating that Creation was turning out badly and needed to be redone without flaws. He sought to highlight such flaws by spawning from them the High Lords of Evil and Chaos: Death, Disease and Decay.

Feeling wronged after his creations were banished into the Void, he sent his worshippers into gruesome wars against those of his brothers, but the Young Gods put an end to it and vanished them from the memory of mortals. Now, like his brothers, he left the word of Titan alltogether. But some of his cults are not as extinct as one could think. 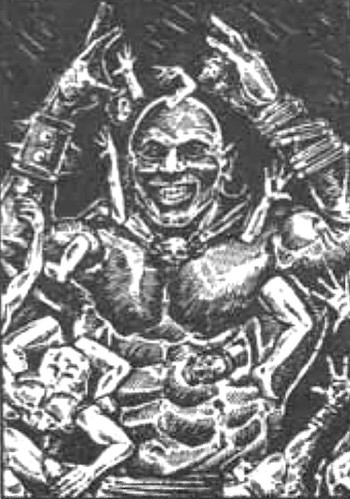 Death is the Satanic Archetype of the entire Fighting Fantasy franchise, the elder and most influential of the High Lords of Evil And Chaos: consisting of him and his brothers Disease and Decay. Appearing in many different forms, Death is aptly described as the "puppet-master who guides the scaly hand of Evil and Chaos". It was he who released Time into the world and subjected mortals to its power, who caused the apocalyptic First Battle and all the bloodshed associated with it, who created the Demon Princes, and who corrupted all sort of entities. He is imprisoned in the Void with his brothers and his mightiest followers, but he continues to send perverted inspirations and ideas to the Demon Princes to further the cause of evil on Titan. 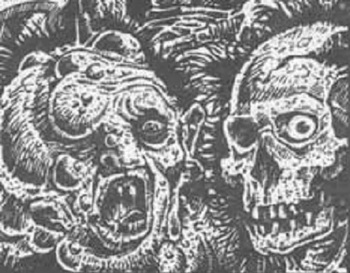 On your left, Disease. On your right, Decay. Front and center, hideousness.
Appear in: Titan - The Fighting Fantasy World

Death's younger twin brothers and fellow Gods of Evil, for in Titan you buy one and get two more in bonus. Like Death, they are named after what the people deem the worst scourges in existence. They helped Death corrupt all his victims, create demons and evil beings, and fight the gods' forces during the First Battle. Now, like him they were banished in the Void for ever and ever.

Deities born from the Fantasy Pantheon of the Celestial Court, but either evil from the start or corrupted by the Demon Gods, they became their servants for eternity and fought by their side in the First Battle. As they fought fairly and remain essential to the balance of the world, they were allowed to remain on Titan, but forbidden to antagonize the gods directly. They still influence mostly the evil races and push their gloomy masters' agenda, but in an Enforced Cold War with the gods.
Arhallogen
Appears in: Titan - The Fighting Fantasy World

The God of Spiders. Contrary to the True Neutral deities of the Animal Court, he is so irredeemably corrupted that he is part of the Dark Gods, while even other animal deities corrupted or blackmailed by Death, Disease and Decay remain firmly in the Animal Court. He provides many Giant Spider monsters to fight against heroes and giving a spider-theme to many a villain.

The God of Shadows 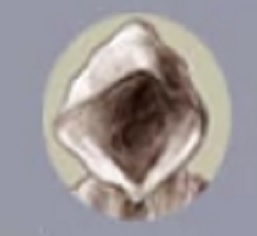 Named like this because he dwells in shadows, not because he controls them, his true name is only known by his fellow deities and his most influental High Priests and officials of the Guild of Assassins. Son of Slangg and Tanit, he is the God of Murders, Deceit and Conspiracies.

The evil Goddess of Sorcery (read The Dark Arts). She is worshipped by, and indirectly influences all Evil Sorcerers and Wicked Witches of the series. 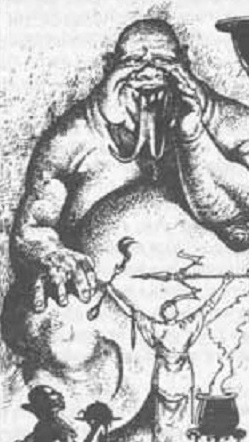 Slangg facing one of his priests
Appears in: Titan - The Fighting Fantasy World | Sorcery!

The twisted God of Malice, brother and husband of Tanit. He is one of the most reverred Dark Gods among Always Chaotic Evil beings, and the only one who intervenes in a gamebook, albeit indirectly.

Daughter of Asrel, the Goddess of Love and Beauty, who grew to despise everything her mother stands for. Now the Goddess of Envy, she married her brother Slangg, whose defection inspired her to change sides.