The sister-world of Titan, where Oldoran Zagor was banished, fusing with the Bone Demon and taking over the remnants of his armies.
The War Dragon 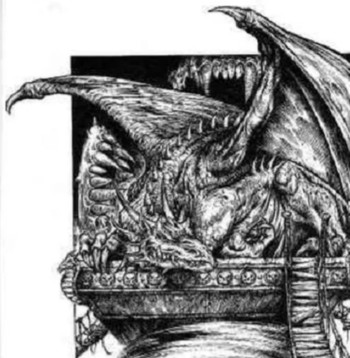 Appears in: Legend of Zagor

The mightiest of the fearsome tribe of Always Chaotic Evil War Dragons who served the Bone Demon in his invasion of Amarillia, taking control of the royal fortress of Castle Argent. Now the Last of His Kind, the War Dragon swore fealty to Zagor, who has fused with his lord, helping him rebuild his forces. Five years after the Pyrrhic Victory that saw the Demon banished and his armies defeated, the Boy King Irian struggles to restore the kingdom, devastated by chaos and corruption. A second attack would spell the doom of Amarillia, so he dispatches four heroes to destroy Zagor before he can strike...

Villains of gamebooks set on our good old world. Even there, strange and gloomy things happen to you...
Gingrich Yurr 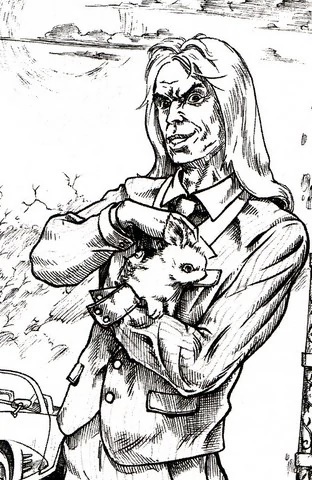 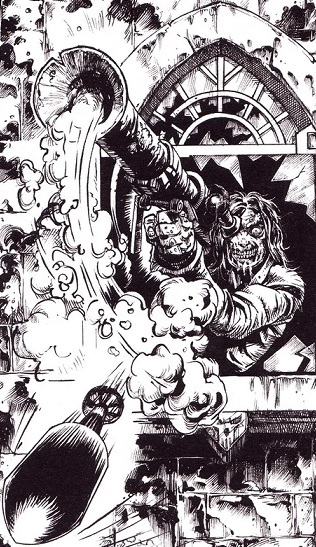 Appears in: Blood of the Zombies

Gingrich Yurr is the lord of Goraya Castle, a wealthy and refined aristocrat with a taste for pet rabbits... And an utterly batshit insane Mad Scientist, dead set on unleashing a Zombie Apocalypse to wipe out humanity because... Because. He surrounds himself with equally disturbed scientists and morally dubious goons, and pays to have people captured and locked in his dungeons to be turned into zombies. But that's not counting with his last captive...

Lord Kelnor, the Earl of Drummer, is the last member of a once-great noble family, which has dwindled much from its former prominence. Publicly, he presents himself as a dignified aristocrat, but in reality, he's the Black Priest of the Night, the leader of a devil-worshipping cult operating out of Drumer Mansion. They kidnap innocent people and travellers who they sacrifice to their demonic idols, and get away with it because several local government officials are also members of the cult. Until one fated night, when you come along...

The Master of the House of Hell (MASSIVE SPOILERS)
spoiler 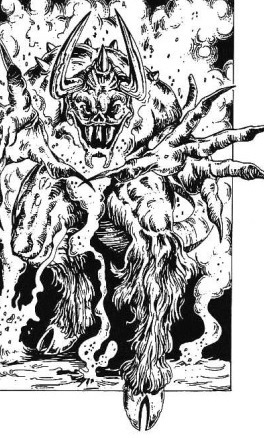 The elusive being only known as the Master is one of the few Fighting Fantasy villains whose identity is a mystery: As you try to find a way out of the House of Hell, and discover that it shelters a cult of demon worshippers, you hear about the ominous Master who controls the sect. While it first seems that the title refers to Lord Kelnor, the Earl of Drumer and owner of the mansion, it eventually appears that things are not as simple as it seems. Will you be able to find out who he is?...

From the vintage series of Fighting Fantasy, there is a series of Gamebooks set in a sci-fi Space Opera-esque universe, which lasts for six gamebooks. Here are the villains featured in these books, should they qualify enough to be a major antagonist. 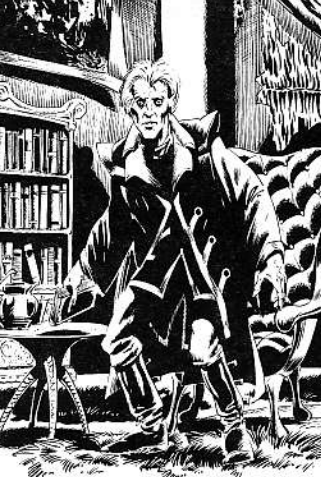 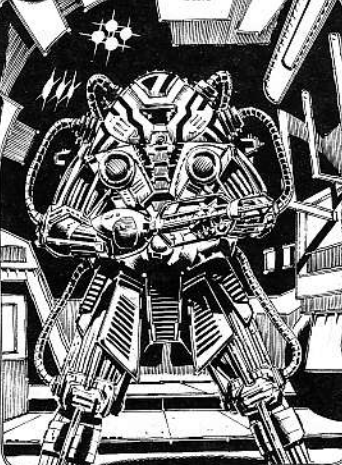 With the WALDO.
Appears in: Space Assassin

Cyrus is a Mad Scientist and biologist, who plans to unleash his hideous experiments on various planets, having done so on several and killing millions upon millions. With your homeworld being his next target, you are assigned to infiltrate Cyrus' ship, the Vandervecken, and assassinate Cyrus before he can succeed. 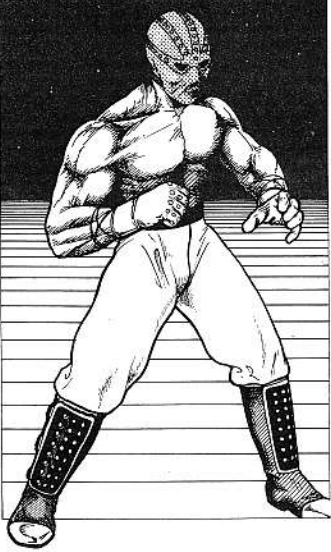 Leader of the Doom Dogs, a vicious gang of outlaws terrorizing the wilderness outside San Anglo, your only way to bypass them is to infiltrate the Doom Dogs' base and destroy their vehicles before they can retaliate. However, at the peak of your infiltration attempt, you will have to confront their deadly, powerful leader, called "The Animal". 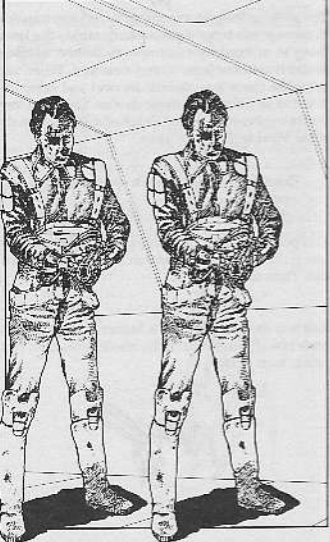 Appears in: The Rings of Kether
Blaster Babbett is the leader of the drug rings of Kether, in charge of manufacturing and distributing the drug supplies across the galaxy. Tracking down the source of the drugs to the asteroid belt outside Planet Kether, you can choose to destroy the asteroid base from within, or challenge the leader, Babbett, in a direct confrontation.
Advertisement:
Zera Gross 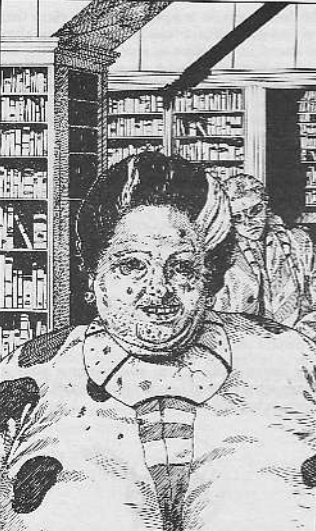 Appears in: The Rings of Kether

Zera Gross is Blaster Babbett's chief enforcer and is in charge of his manufacturing operations of the Satophil-d drugs. Her operations caught the attention of the Galactic Federation, and you are assigned to investigate.

Minos, Leader of the Karosseans
Appears in: Robot Commando

The Leader of the Karosseans who unleashed the sleeping virus on your home planet, for his forces to perform an easy invasion. But he didn't expect you to be somehow immune to his virus, and now you are the lone hero standing between the safety of your home planet and the invading Karossean horde.

An alternate universe with superpowers and advanced technology mixes with the normal world of the end of the 20th century, full of Super Heroes clashing with Super Villains.
Vladimir Utoshski 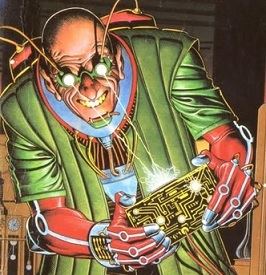 Appears in: Appointment with F.E.A.R.

In this Science Fiction themed gamebook with super powered people and all sorts of scientific hijinks, you play as the Silver Crusader: a powerful Mutant born from a secret genetic engineering experiment, who grew up into a Super Hero, fighting crime in the city of Titan, in a loving homage to pretty much every comic book series under the sun. But any Super Hero worth their salt needs a suitably dangerous nemesis to fight. Enter Vladimir Utoshki, a Cyborg and a Diabolical Mastermind, who runs F.E.A.R. (the Federation of Euro-American Rebels) under the alias of Titanium Cyborg. Utoshki does not stop at crime, he dabbles in terrorism, supervillainy and world domination. As super-villains of all sorts are running wild, it is up to you to uncover his latest plot and finally bring him to justice...

A High Fantasy world in a Medieval Stasis, very similar to Titan, setting to the Way of the Tiger series. With the Fighting Fantasy book set there serving as The Pilot.
Hawkana

Appears in: Talisman of Death

In the world of Orb, the Religion of Evil worshipping the God of Death created the titular talisman, an Artifact of Doom that would extinguish all life and bring about their god's reign. Many factions covet the Talisman, including the Thieves' Guild and Hawkana, the High Priestess of the evil Warrior Goddess Fell Kyrinla. She steals it from you at the beginning and you must take it back at all costs, allying with the lawless Thieves Guild to sneak into the temple. It is up to you, a warrior brought from Real Life by the gods of Orb to take back the Talisman to your world where it would be powerless...

A world parallel to Titan, though in the same Multiverse and accessible by a warrior from the usual Fighting Fantasy setting. It is accessible through the Aleph, and travelling through the Macrocosmos.
Globus 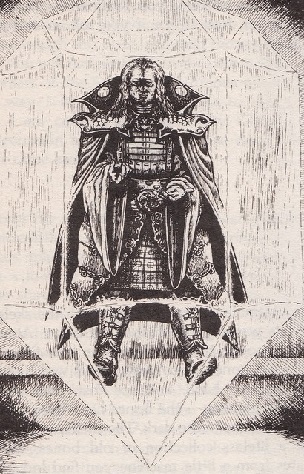 A powerful Archmage who rules the Ziggurat world in the Macrocosmos, he seeks the Aleph, a powerful Macguffin Sphere which could grant him access to powers of the Macrocosmos, including the power over all creation, which inevitably fell in the possession of the player character.

The unnamed world, which just like Ziggurat above is parallel to Titan and part of the same Multiverse. There, every mage is an Evil Sorcerer tracked down by the Magehunter society for peace keeping.
Mencius 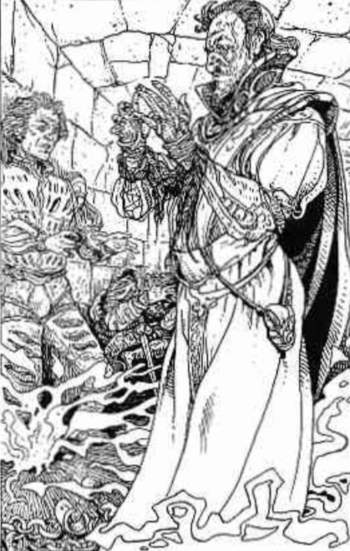 One of the most powerful mages and the sworn enemy of Magehunters everywhere, you capture Mencius at the start of the adventure and delivers him to Margrave Mechtner's Castle to claim him as your bounty. Unfortunately, Mencius escapes to the world of Titan and retaliates by cursing you to be dragged to the distant land of Kallamehr in Allansia with him. You must hunt down Mencius and find your way back...