This page is a listing of factions and characters from the Command & Conquer: Tiberian Series.

Sanctioned by the United Nations, the Global Defense Initiative has one goal: to eliminate multi-national terrorism in an effort to preserve freedom.
-EVA Database briefing

The United Nations Global Defense Initiative (UNGDI), or Global Defense Initiative (GDI), was originally the military wing of the United Nations founded in 1995 in accordance with the United Nations Global Defense Act, passed in order to combat global terrorist groups like the Brotherhood of Nod. GDI's initial goal was to preserve world order by combating global terrorism, but eventually outgrew its original mandate to become a world superpower. It is capable of instantly deploying vast quantities of well-trained and well-equipped soldiers backed by powerful ground, air and naval assets to any point on the globe, and this in ways that are considerably more organized, advanced, and on a much greater scale than any conventional real-life military force today possibly could. GDI troops utilize both superior armor and firepower, making them typically much more powerful than Nod forces in direct open confrontation, but also more cumbersome and less flexible. Preferring overwhelming firepower to subtlety, GDI forces have few stealth units.

The Brotherhood of Nod is a mysterious Abrahamic Church Militant society of allegedly ancient origins. Throughout its struggle with GDI, Nod is shown possessing characteristics of a vast religious movement, a Mega-Corp and a decentralized nation-state, while being none of the three in itself. The Brotherhood of Nod represents a flexible, elusive and worldwide guerrilla army which thrives on the sophisticated synergy between low-tech militia troops and elite forces equipped with ludicrously advanced weapons and defensive technologies derived from the Brotherhood's unparalleled understanding of Tiberium and its military applications. The Brotherhood's military is centered around the concepts of stealth and speed, preferring outmaneuvering their enemies, hit-and-run attacks, guerrilla tactics, wave attacks, and subterfuge.

And we thought we were alone in the universe! Oh, the hubris!!
-Garbled transmission from a GDI soldier during the invasion of Munich
Scrin is an extraterrestrial force is trying to terraform Earth with Tiberium and harvest Tiberium deposits. They aren't referred to by name; they are only called by GDI as "invaders" and "Aliens" and by Nod as "Visitors". They have remained dormant along the edge of the Solar System for a millennia, until awakened by the massive detonation of liquid Tiberium beneath the Brotherhood of Nod's "Temple Prime". The Scrin swiftly proceeded to launch an assault on Earth's cities, wreaking havoc on GDI and Nod alike. These attacks were actually diversions that allow the Scrin to construct large "Threshold Tower" structures. Scrin units and structures show a distinctly bio-mechanical and insect-like appearance. Furthermore, they possess several economic and military advantages related directly to Tiberium, including the ability to promote the growth of the substance, to store infinite amounts of it, and to use it to enhance their units and weaponry. As they are Tiberium-based, the Scrin are immune to the radioactive effects of Tiberium. However, they are vulnerable to anti-Tiberium weapons like Nod's catalyst missile and GDI's sonic emitters. The Scrin has the passive ability to create wormholes to instantly teleport units around the battlefield. Of all the factions, the Scrin possess the most powerful aerial force, consisting of fighters, warships, and carriers.
The Forgotten 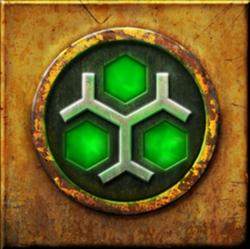 Never say "Trust us" to a mutant..
-Kane

A third faction that has emerged in the years since the First Tiberium War, the Forgotten are comprised of Mutants, humans who have been corrupted by Tiberium, to the point that it is actually growing out of their skin. Largely shunned by society, with whom they share a mutual dislike and mistrust, they band together wherever they can. During the Second Tiberium War, they ally with GDI in the hopes of using the Tacitus to create a cure. 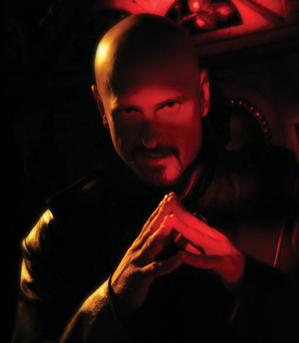 "You can't kill the Messiah"

The enigmatic leader of the Brotherhood of Nod, self-proclaimed prophet, and most magnificent of bastards. He has led Nod every time they rose against GDI through the years. Wherever Tiberium goes Nod is never far behind, and Kane calls the displaced and downtrodden to his cause. He is convinced Tiberium heralds a new age, one that mankind must embrace and views GDI's attempts to control and remove Tiberium as foolishly shortsighted which leads him into conflict with them time and time again.

Though Nod has been defeated many times, and Kane himself declared dead just as many, he always manages to return, despite being vaporized by an Ion Cannon and run through with a jagged piece of metal. Though they assure the world each time that he's really dead now, GDI leadership often wonders if they will ever truly be rid of this madman...