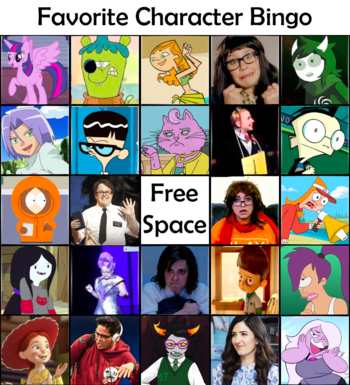 In lieu of a personal image, here's a "favorite character bingo" I made a short while ago. Feel free to note any favorites we share!
Advertisement:

She/her, they/them, or ze/zir. Bisexual autistic genderpunk girlnote not trans, but I believe in gender being nothing more than a construct and the right of the individual to define their gender outside of the binary in her early 20's. Aspiring television writer, current time waster.

I designed when I was 12 and was so proud of it that I made it my username on every social media account at the time. It's really dumb, but I find it really charming in retrospect.

I've been active on the wiki since I was 12 but have only been heavily involved in wiki maintenance since the spring of 2020 - extra free time, you know. I'm always learning the wiki rules, and it's a bit of a buzzkill but it's also extremely cathartic and empowering to learn that the stuff that bugged me when I was a kid is actually not allowed anymore and that I can help fix it!

A rundown of some characters I relate to the most, since that explains why I choose certain icons:

About me
I've decided the "tropes that apply to me" thing felt cheesy so I'm reworking this as a general info section.
Some of my favorite media

Bolded = I try to Entry Pimp this a lot, or just edit the page whenever I can.

I just think these tropes are neat:

And I have issues with these tropes:

I peruse these pages when I'm bored:

I made these pages
I made or helped make these tropes

I drafted these tropes:

I adopted and launched these tropes:

I drafted these indexes:

I'm running these TLP draftsnote there's more than these, these are just the ones on which I want the most feedback:

Alphabetized without regards for section and with the notes removed, so you'll be encouraged to find them in full on the page itself. It's a fun page!
IP stuff

I picked the image for these tropes (either in TLP or IP / suggestion thread):

I only provided the caption for these images:

I uploaded these videos
Advertisement: