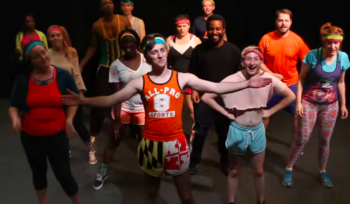 Welcome friends, I'm BDG, and I'll teach you how to trope properly!

"Here's that new thing that you're choosing, get up with Dances Moving!"

is a seven-part musical webseries made by Brian David Gilbert (or "BDG") and his sister Laura Kathryn Gilbert. Brian plays himself as a dance instructor who showcases a particular dance step to his students every episode. Originally presented as a lighthearted pastiche of instructional dance videos from The '80s, the series develops a more serious narrative when Brian falls for a girl in his dance class, but then has to move away, and his life spirals out of his control.