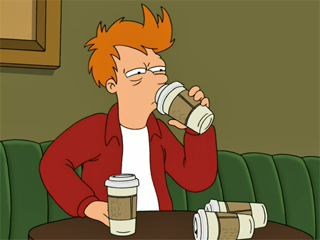 The main character. Fry is a decent, honest and fun-loving guy with a huge heart, but he's also immature, lazy, and not very bright. Once a pizza boy from the 20th century, he accidentally cryogenically freezes himself during a delivery run on New Years' Eve, 1999 and wakes up on New Years' Eve 2999. Hilarity Ensues when he gets a job at Planet Express as a delivery boy, working for his closest living relative, distant nephew Professor Farnsworth. 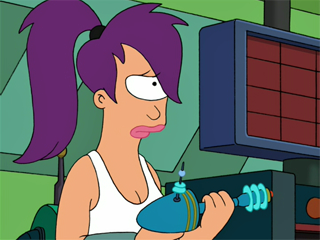 "Look, I don't know about your previous captains, but I intend to do as little dying as possible."
Voiced by: Katey Sagal
Debut: "Space Pilot 3000"

Leela is everything Fry isn't. Smart, strong, level-headed, a mutant, and a woman. So it's no surprise she ends up being the girl of his dreams. Leela was abandoned as a baby and grew up in an orphanarium. For the longest time she believed she was an alien from an unknown planet, but later found out she was a sewer mutant native to Earth. She is the conscience of the group, and is often prone to nagging them and expressing her outrage at their various immoral actions (though Rule of Funny dictates that she is in many ways as bad as Fry and Bender). 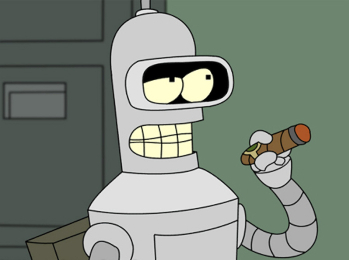 A loudmouthed, kleptomaniac, misanthropic robot who also happens to be Fry's best friend. Despite his abrasive personality, has been known to Pet the Dog on occasion. Bender drinks constantly, because his fuel cells are powered by alcohol. He also smokes constantly because he thinks it makes him look cool. 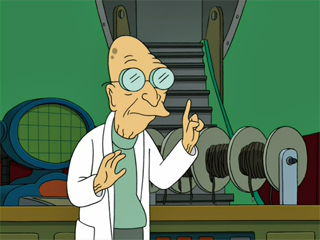 Fry's great-to-the-umpteenth-power nephew. An inventor whose brilliance is hindered by his old age. Owns Planet Express, and manages to get ample screentime despite never accompanying the heroes on their missions. 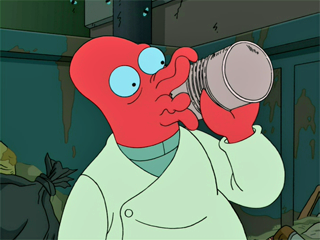 "You lost the woman of your dreams, but you still have Zoidberg. YOU ALL STILL HAVE ZOIDBERG!"
Voiced by: Billy West
Debut: "The Series Has Landed"

A lobster-like alien who serves as the doctor at Planet Express, and lives in Professor Farnsworth's walrus tank (and sometimes in a dumpster out back). He's not very good at his job, and has secret ambitions to be a comedian. Unfortunately, he's not very good at comedy either. In fact, he's not very good at anything except annoying the fellow crew members. Coasts by on freeloading off others, being pitied for his naivete and occasionally being the hero. 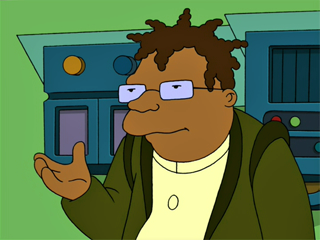 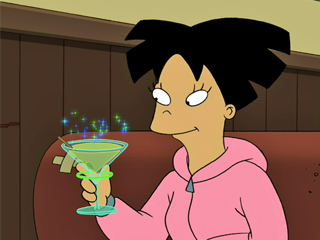 "Spleh!"
Voiced by: Lauren Tom
Debut: "The Series Has Landed"

An "intern" working at Planet Express, though seemingly as permanent as everyone else there. Is extremely rich and spoiled. Her parents own half of Mars, which they use for buggalo ranching and a gambling paradise called "Mars Vegas".