Every spoiler up to episode 25 (the last episode before the podcasts and spinoffs start) is left unmarked. 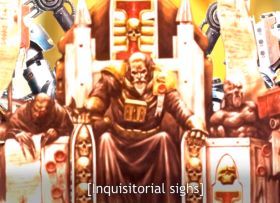 A man so regal he takes his throne everywhere he goes, Karamazov is one of the most influential Inquisitors out there. He's also a self-righteous madman with the policy of "kill first-ask questions later", so when a missive to disband the Inquisition comes from the Imperial Palace, he rushes to Terra to burn the hives down in search of an answer. 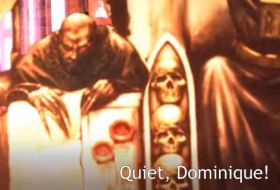 He gets that a lot.
Voiced by: Franky

Not your perfect Inquisitorial lackey. Dominique mans one of the arms of Karamazov's throne and while his official job is somewhat unclear (it should be to mindlessly write down everything that Karamazov says), the unofficial seems to be whining and annoying the hell out of his boss, who despite this resorts to grumbling rather than firing him (or firing at him) on the spot. It is later learned the his annoying and obnoxious tendencies are actually for a purpose... 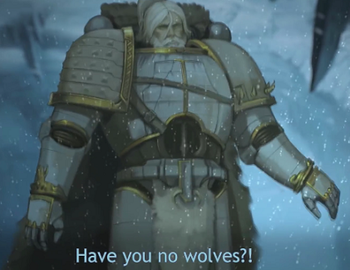 "You need to spend more time being raised by WOLVES, you tarnished old skeleton, FOR WOLVES ARE STRONK!"
Voiced by: Zoran The Bear

Another of the 20 primarchs, and the Emperor's self-appointed Executioner. Prophesized to return during the End Times to fight again alongside the fellow defenders of the Imperium.

The Holy Orders of the Emperor's Inquisition. Judges, Jury and Executioners of The Imperium 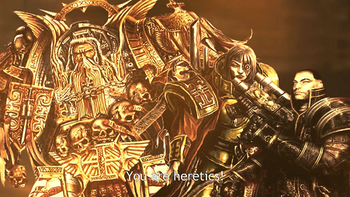 Keep in mind that this is being said to The Custodes.

A collection of highly religious and incredibly powerful orders who were tasked with rooting out threats caused by aliens, heretics and daemons within The Imperium. Unfortunately, they have a tendency to cause far more harm than good as a result of their rampant paranoia and fanaticism to dogma, leading to The Emperor eventually having Magnus send the vast majority of them into The Warp along with their then appointed representative, Fyodor Karamazov.

Inquisitor Donklas of the Ordo Hereticus

An Inquisitor with a love for executing heretics.

An Inquisitor who has strong feelings towards Genestealers.

A Grand Master of the Grey Knights.

Ex-Inquisitor Fidus Kryptmann of the Ordo Xenos, Hero of the Macharian Heresy

An Inquisitor (in)famous for his work against the Tyranids. Takes center stage in a trilogy of episodes called "BEHEMOTH", which also details the first encounter with the Tyranids.

An Inquisitor whose first, last, and only reaction to just about anything is Extermiantus.

A group of Space Marines withdrawn from their chapters to serve directly under the Inquisitorial Ordo Xenos.

A champion from the Dark Angels chapter.

An apothecary from the Ultramarine chapter.

A librarian from the Space Wolves chapter.

A marine from the Space Wolves chapter.

A sniper form an unspecified chapter.
Sisters of Battle

A detachment of troops from the Adminsitratum, attached to the Ordo Xenos. 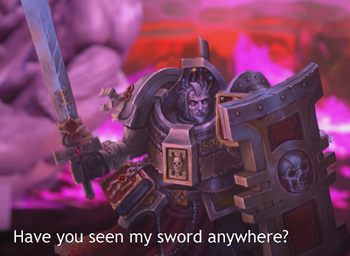 "Hands do not exist in my reality!"
Voiced by: Gemineye

The leader and the mightiest warrior to ever grace the ranks of the Grey Knights, a masterful combatant and unmatched psyker who has defeated the forces of Chaos and even bested Daemon Primarchs countless times all on his own while remaining in the realm of madness and insanity that is The Warp. While his body has persisted for centuries, however, his mind clearly fell ages ago.

The Star Child, Excised Compassion of The Emperor

A glowing child with the voice of a man who rides a reed boat. Implied to be the Emperor's lost soul or the embodiment of his discarded compassion and humanity that he needed to lose in order to lead the Imperium.

Vulkan, Primarch of The Salamanders 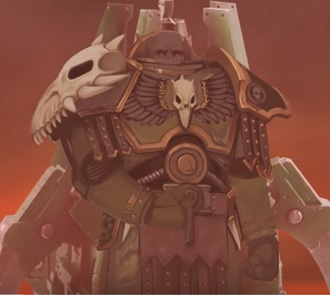 Congratulations, My Friends!
Voiced by: ComradeCrimson

One of the 20 Primarchs, the genetically-modified, superhuman children of the Emperor. Specifically, Primarch of the Salamanders. Prophesized to return when his chapter gathers all of his relics together. 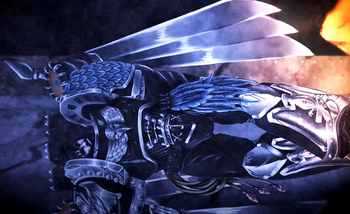 One of the 20 Primarchs, the genetically-modified, superhuman children of the Emperor. Specifically, Primarch of the Raven Guard. After having been trapped in the Engine of Woes for several millennia, Corvus was released by accident by Magnus. He's also absurdly emo too. 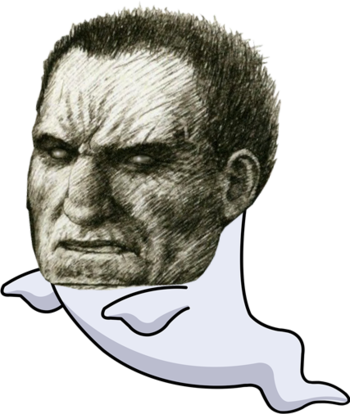 The ghost of Ferrus Manus, who haunts the mentally unstable Vulkan and Corvus.

Corvus' legion, just as depressing and eloquent as he is.

The regiment of the Imperial guard recruited from the planet of Catachan.

The regiment of the Imperial Guard recruited from the arid world of Attila. 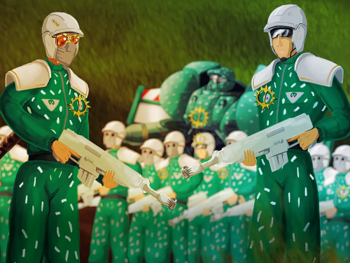 Pesh (left) and Hox (right), with the regiment and an Asstart Spagle Man in the background.

The regiment of the Imperial Guard recruited from the miserable, hyper-capitalist agri-world of Jopall. After some words of inspiration from Corvus Corax, they stage a coup against their corrupt governor, led by Private Pesh and Private Hox, and reorganize themselves into a mercenary company to fund their new government.

The Salamanders, Masters of Flames, Friendship and Adventure!

The Ultramarines, Honorable Battlebrothers, The Emperor's Finest, THE GREATEST OF THEM ALL! 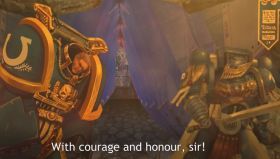 Even their Chapter Master can't stand them.
Voiced by: Karl The Deranged

The Imperium's greatest Space Marines, capable of succeeding in any mission, no matter how dangerous, suicidal, and outright sabotaged by their own side it is.

The Dark Angels, The most Loyal and Honest Chapter with no Heretical Secrets to hide at all! 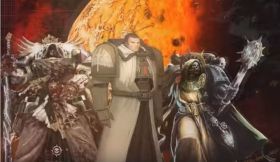 The most loyal servants the Imperium could hope for!From left to right Belial, Azrael and Asmodai
Voiced by: Gemineye

A chapter led by Azrael, Asmodai, and Belial, a trio of paranoid wrecks obsessed with finding Cypher and the rest of The Fallen while trying to keep it all a secret from the rest of the Imperium. 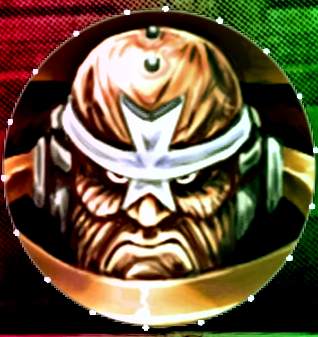 Effectively the Chapter Master of the Black Templars, and the man in command of perhaps the greatest army of Space Marines out there. He gets dragged into a podcast with the Emperor as a way to give him, and thus his entire chapter, some much-needed anger therapy.

Senior Chaplain of the Black Templars.

Voiced by: Randolph Carter
A Skitarii Ranger from the Forge World of Lemuria that acts as the party's tech expert. He is armed with a power sword, a radium pistol, and a… unique attitude.
Reeb Van Horne

Voiced by: Earndril
An Inquisitorial Acolyte who has a fixation on medicine and Xenos biology. He joined the crusade to study Xenos, which he takes to with gusto whenever he gets the opportunity, and also serves as a medical officer for the party.
Lorn

Voiced by: ZoranTheBear
A sanctioned psyker hailing from Fenris, Lorn possesses a degree of psychic mastery that makes him an invaluable member of the team. Now if only the could work on his attitude…
Captain Zedek

Voiced by: HulkyKrow
The rogue trader who commands the Debt Collector, and in general is a charismatic and effective leader when he isn't busy reigning in his subordinates more eccentric behaviors.
Tater Tot

A Ratling child found by the crew on a Feral world. π-Braine swears to teach him everything he knows. 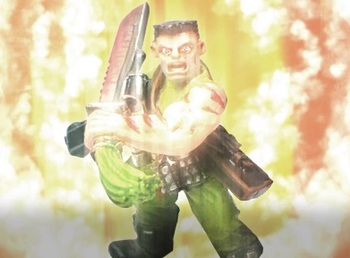 Voiced by: Screaming Blood Raven Sergeant from the Dawn of War intro cinematic

A man renowned for his might in combat and his famous warcry, Sly Marbo travels from planet to planet by foot to kick heretical and xeno ass wherever he is needed the most.

Ephrael Stern, the Thrice-Born, the Daemonifuge, Battle Sister of the Order of Our Martyred Lady

Sister Superior of the Seraphim Squad, Ephrael was one of the Battle Sisters not sent into the Eye of Terror, in her case due to her being in the Black Library.
Billy

A young boy who always wear a box on his head and constantly finds himself in terrifying situations. Knows Boy, one of the Highlords, and is a mutant.

Ciaphas Cain, HERO OF THE IMPERIUM

One of the most legendary commissars of all of the Imperium of Man, who has the Undying Loyalty of his troops. Also like in 40K canon, he considers himself a massive fraud who bullshitted his way to the top.

Celestine is one of the Living Saints, a handful of extremely important people in the Imperial faith who have displayed miraculous powers and have been canonized by a conclave of the Ecclesiarchy and the Inquisition. She is known to come to the rescue of Imperial forces in the most dire of times. 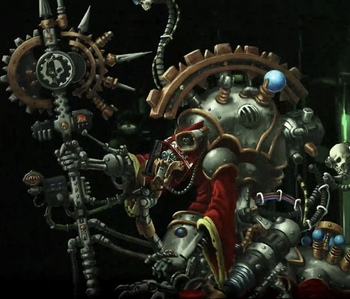 Line open. Hello! Belisarius Cawl speaks. What do you require? FUCKING WHAT?!

An ancient tech-priest alive during the Heresy, creator of the Primaris Marines. The Fabricator-General orders him to eliminate Kitten's task force.