Every spoiler up to episode 25 (the last episode before the podcasts and spinoffs start) is left unmarked.Click here to return to the main character page.

open/close all folders
The Emperor 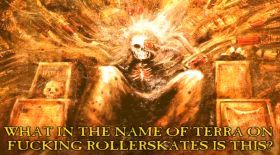 The usual reaction.
Voiced by: A Text To Speech Device and Randolph Carter

(Whenever not using the Text To Speech Device, which is mostly flashbacks, Imagine Spots, drifting soul fragments, etc)

The mightiest being in the galaxy, the post-human titan, the saviour of humanity, a living god...note -like being once. These days, he's stuck on the galaxy's most elaborate life-support machine and nearly powerless physically, which leaves him with a snarky attitude and an awful case of grumpiness. Also an itchy nose for some reason, despite effectively being a skeleton. 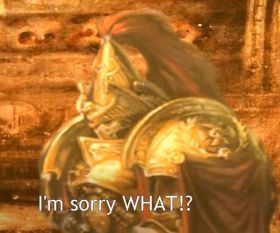 That's also a usual reaction. Click here to see him in his Captain General Armor 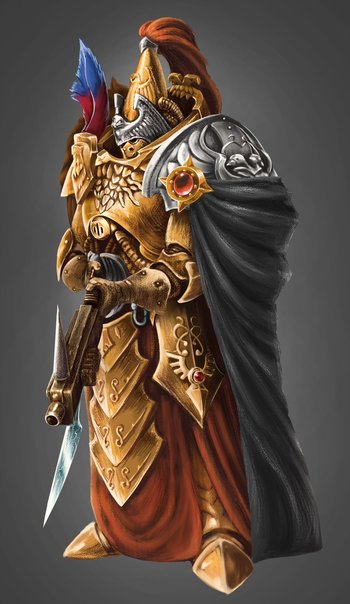 The current commander of the Adeptus Custodes and the personal caretaker of the Emperor of Mankind. One of the few to avoid or at least get out of the crippling insanity riddling the Adeptus Custodes, he's watching over the Golden Throne when the text-to-speech device is mounted and thus assumes the position of Emperor's companion and adviser - a job description which translates to "Butt-Monkey".

Magnus the Red, Primarch of The Thousand Sons 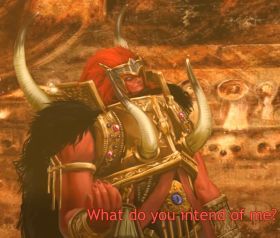 One of the 20 Primarchs, the genetically-modified, superhuman children of the Emperor. He was actually a Chaos Primarch, having fallen during the events of the Horus Heresy, and doesn't return until the Emperor decides to sent Ultramarines and haul him back to Terra. Now, with his soul back and protected from Tzeentch and his minions in the Imperial Palace, he brings his wit and Insufferable Genius to the arguments within the Throne Room. 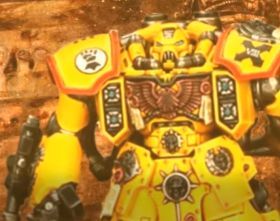 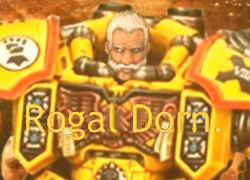 The Primarch of the Imperial Fists legion. Initially disguised as a Centurion who helped calm the Emperor's rage after seeing the dreadknight, he revealed himself to prevent the accidental releasing of Magnus the Red's rage at the mention of the Space Wolves. He has since become a steadfast, and for the Emperor, an exasperating and inescapable presence within the Golden Throne's chamber.

The Custodes, The Guardians of The Emperor

The Emperor's personal bodyguards, some of the greatest and best-equipped warriors in the galaxy. However, their grief at their master's internment on the Golden Throne and the centuries of isolation have left them somewhat... peculiar, to say the least.

The Fabulous Custodes in General
Voiced by: Haven Kendrick 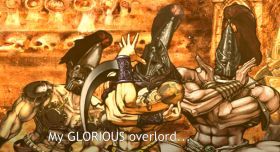 Your Awkward and Trippy presence is not required.
The fabulous custodes are the ones we see the most often - in particular a trio called Karstodes, Custodisi and Whammudesnote Karstodes is the one with the arm-blades, Custodisi is the one with the plates on his chest, and Whammudes is the one crossing his arms., nicknamed "Fabulous Custodes" after their introductory episode. Then there's Santodes, who, after being briefly mentioned in Episode 12.5, is revealed to have been interred into a dreadnought.. and that did absolutely nothing to calm his fabulousness.
Karstodes

The leader, or at least the highest ranking, of the Fab Custodes trio. He's also the most fanatically loyal of them and the dimmest.

The most marginally sane of the Fab Custodes trio, though it's somewhat undermined by his fixation on Magnus.

The most unsettling of the Fab Custodes trio, though also the one with the most individual focus.

The answer to the question "What if one of the Fabulous Custodes became a dreadnought?", Santodes ended up in his current state after he "heroically" sacrificed himself by jumping between Horus and the Emperor. After having removed his armour. And after Kitten had pointed out that a random guardsman had just done the same thing.

Kitten (reluctantly) calls upon him to provide heavy support during his mission to Mars.

Responsible for guarding and containing the secrets buried beneath the Imperial Palace, including dealing with ancient dark-tech abominations, Lockwarden and his men are among the sanest members of the Custodes, to the point that they all wear armour.

Lockwarden himself actually treats the Captain-General with the respect he deserves, and is apparently his go to guy when he needs comforting after (totally not canon) breakups.

Leader of the Heralds of the Golden Throne, master of the guilt-trip, extremely passive-aggressive, and evidence that, simply because a Custodes decided to keep wearing his armour, doesn't mean he's completely sane.

Called upon by the Captain-General to help with negotiations during his mission to Mars.

Voiced by: Karl the Deranged.

A rather eccentric member of Kitten's Mars party, notable only for how strange he is compared to even the Fab Custodes.

A minor Custodes who seems to have aspirations on becoming the Emperor himself.

The High-Lords Of Terra, The Government of Humanity 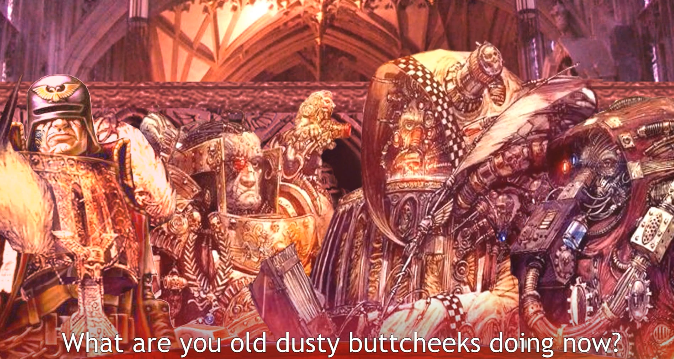 The best minds Terra has to offer the people!
The Master of the Administratum voiced by: The Fresh Sorcerer

Lord Commander Militant of the Imperial Guard voiced by: Karl the Deranged

Consisting of Decius, the Fabricator-General of Mars, Grand Provost Marshal, Lord Commander Militant of the Imperial Guard, The Master of the Administratum, Lord Inquisitor Fyodor Karamazov, and Kitten (who rarely attends meetings) they are the group that was responsible of taking care of the Imperium wile the Emperor was out of action. Let's just say that due to them all being rather senile and lacking common sense, they were not doing that good of a job. 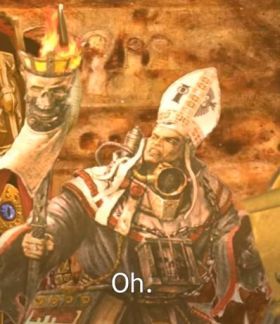 Watch that hat, it's about to go flying...
Voiced by: Kochiha Ichihara

The Ecclesiarch (later known as Manclesiarch), otherwise known as the man in charge of maintaining the Imperial Faith, which makes him rather redundant once the Emperor decides to disband both the Ecclesiarchy and the Inquisition. Despite this little obstacle, he continues working for the good of the Imperium.

The Fabricator-General of Mars, Magos Mechanicus

The leader of the Adeptus Mechanicus and the Cult Mechanicus. 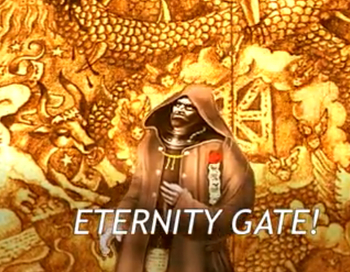 A not-so-normal man who was charged with giving tours of the Imperial palace. He was recently raked by the Man-Emperor himself to read a Dark Eldar codex, later staying for the rest of the shenanigans.
Boy 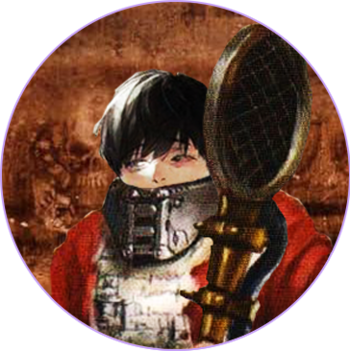 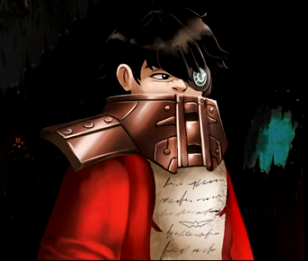 A boy of indeterminate age, "Boy" has the privilege of serving as a vox-serf in the Imperial Palace not just for the the Adeptus Custodes and a "Space Marine" of the Imperial Fists but also for the Emperor himself. Unfortunately for him he's often the punching bag for when things go wrong and is often ignorant when it comes to the topics at hand. Is apparently friends with Billy.

A Techpriest that first appeared in episode 24, replacing "toaster guy" (who installed the text to speech device in exchange for a toaster from Kitten). He can easily be distinguished by the rest of the cult mechanicus by his green & gold color scheme, saurian mask (or actual face; it's hard to know with Mechanicus adepts), and by the fact that 90% of his dialogue is questions.

A trio of Sisters of Silence who accompany Whammudes through the Extolled Canals of the Emperor's Undesired.

Voiced by: The Fresh Sorcerer

Boy's immediate superior when he's not doing the vox-casts.

A nameless wizard. The Emperor's character.

A squat Runesmith Apprentice with dreams of a smithy-inn hybrid. Rogal Dorn's character.

A maddened dung collector from Nordland. The Lord Commander of the Astra Militarum's character.