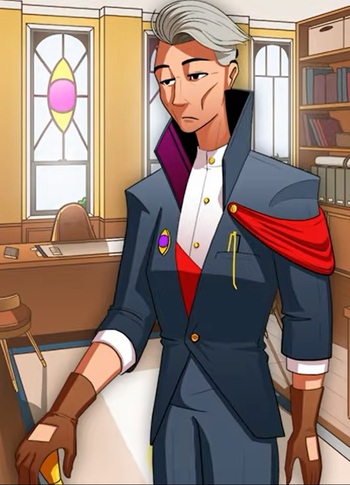 "She's so fancy and so sad already."

A seasoned PI in her own right, Jancy is the head of the detective agency. She's constantly exhausted by the antics of her new hires. Her special ability is called Grateful Detective, which allows her to see if there are any clues or witnesses in a room. 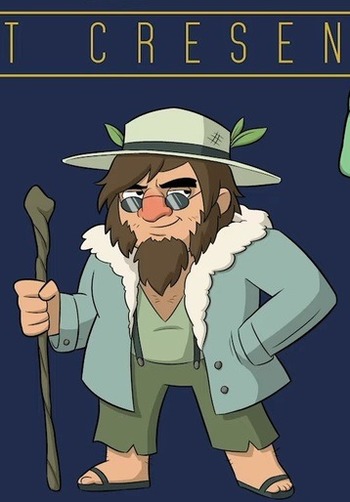 "I think I fancy myself a bit of a pet detective."

A dwarf druid who, prior to applying for the detective job, was a dog walker. His name is constantly changing. Grendan's special ability is called Dog Whisperer, which allows him to get the truth out of a witness for 20 seconds. He has to use it on Sam Ug, who is being especially unhelpful.

She got this job mostly because it looked good on her resumé.

A mysterious human rogue and thief. She lied a little on her resume, which is how she got the job. Her special ability, Millennial, gives her the... special ability to do the drawing challenge twice if she wants. She uses it to do the challenge Harper gave to York, which was to draw York as a kitten.

"That's our boy. Our angry detective."

A half-orc ("hot orc") barbarian from the Northern tribes. He's visiting his human mother to learn more about human culture. York's special ability is called Miscommunication, which allows him to skip a drawing challenge through unintentionally intimidating a witness. He uses it to skip Harper's challenge of drawing himself as a kitten asking for milk on the grounds that he hates Harper. 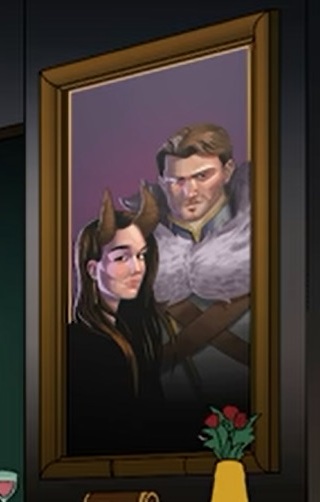 A portrait of Sorin (right) and his wife Lotta (left).

A human paladin captain who married into the Justice family. He is the father of Harper and Emery. Said to be very powerful and strong, but kindhearted. He was stabbed in the back in the master bedroom at a party, leading to his death. For reasons that should be obvious, he is not the killer.

"The only genuine character."

A tiefling from a socialite family. She's a former thief-turned-spy. She is not the killer. 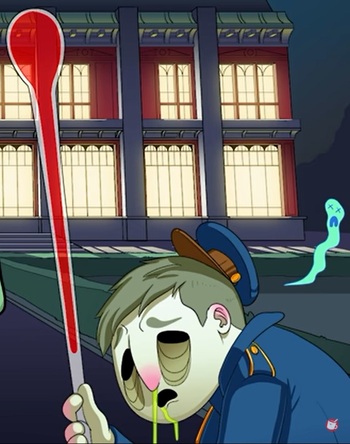 A very sickly police officer. Not the killer.

An elf police officer the same rank as Phlegmucousy. She's very happy with her position and doesn't want to leave it. She's intensely passionate about her job. Not the killer. 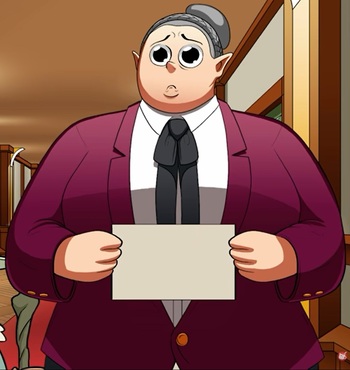 A sensitive and kindhearted elf. Her purpose is to help the Drawtectives with getting a witness to re-question them, although they never end up doing this. Not the killer. 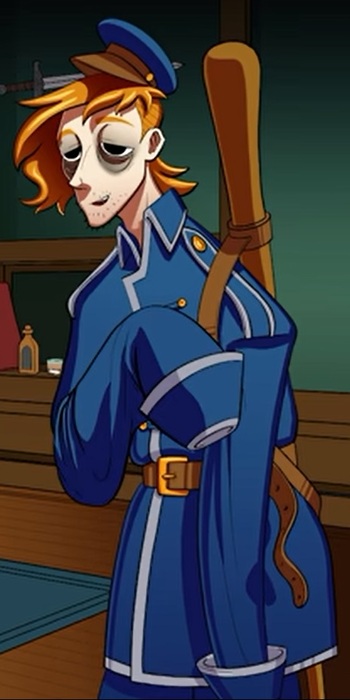 A traffic cop who is incredibly chill. Not the killer. 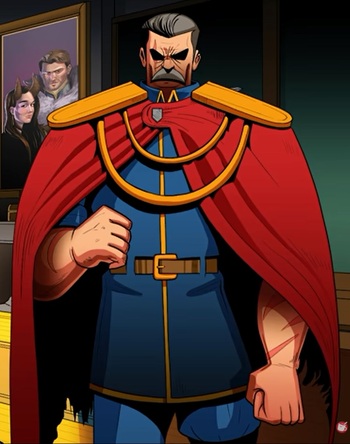 "I've been through a lot. That somehow makes my hand really big, but it's good for punching, you know?"

A sergeant with the police force and Large and in Charge of the B-squad. He's not very bright, but his drawing challenge was the only one actually related to the murder. He was once accused of a crime he didn' commit, but Jancy proved him innocent, and now he's a police officer. Not the killer. 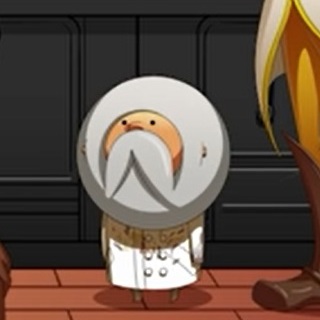 The tiniest, cutest, and best chef in the entire world. He provides the Drawtectives with a tiny key. Not the killer.

A tall, slender elf who is interning as Buzz's assistant. His parents wanted him to be a model, but he wanted to be a chef. Not the killer. 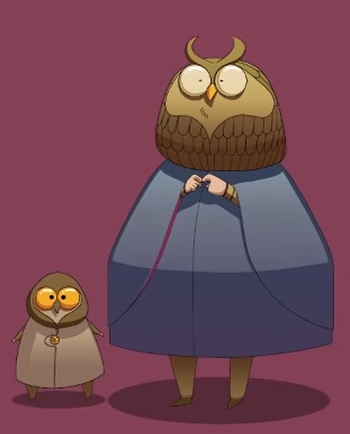 "A big round and a tiny loud."

A father and son duo confined to the conservatory for the duration of the investigation. They were not at dinner and were apparently at the scene of the murder right before the murder itself. Neither are the killer. 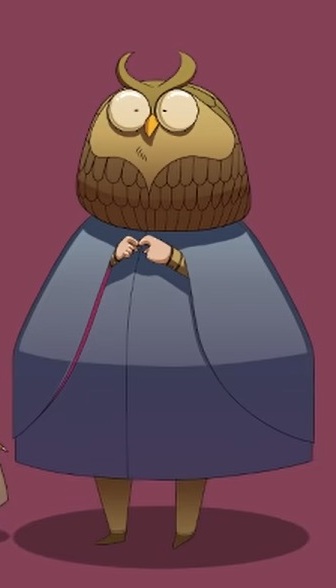 "You know, my son is a very curious boy."

A nervous, sweaty personal injury accountant for Jorgen's and Borgen's. 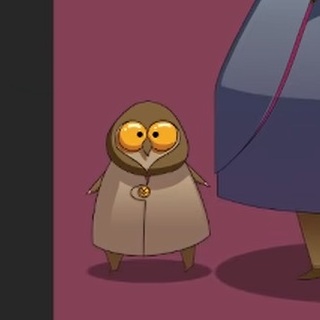 "Who the hell are you guys? What do you want?!"

A small, loud child who likes stealing things. He gives the Drawtectives their drawing challenge between him and his father, Avis. He's apparently an avid fan of cartoons that feature giant sword-wielding women riding on trains, squat cowboys who ride equally squat "gun-horses", and Cerberus riding an athletic pennyfarthing. 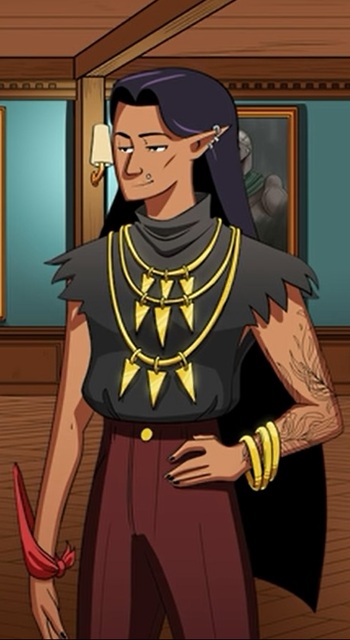 She knows Lotta from the past, a little bit.

A very cool elf who fronts the band Birds of Prey. She's prone to casually bragging about her success. Not the killer.

The obnoxious half-tiefling daughter of Sorin and Lotta. She doesn't like the rich and claims to not be herself, but she lives in a house her mother pays for. Supposedly was in the dining room the entire time. Not the killer. 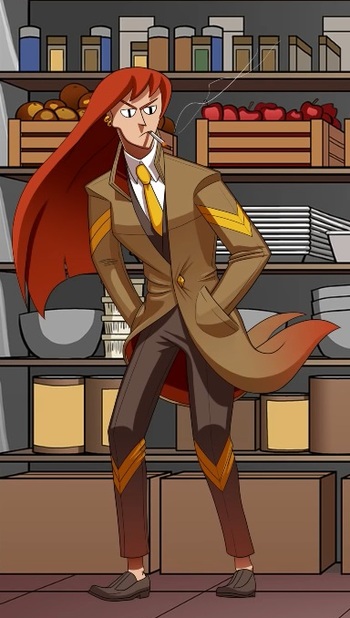 "Y'all talkin' about my smoking?"

A thief-turned-spy who was at the party posing as a waitress. In reality she was some of the additional hired security for the party. not the killer. 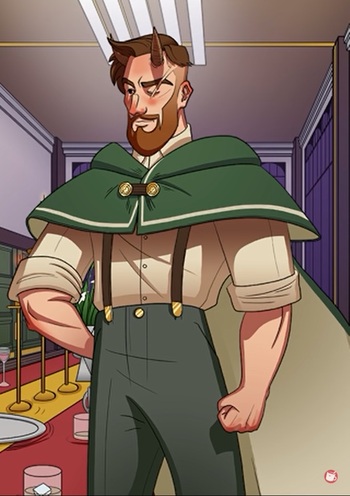 He has been working out, in case you couldn't tell.

A half-tiefling and Harper's older brother, Emery is the son of Lotta and Sorin Justice. He's a ranger stationed out east. He was asked to come to the party as security. Is the killer. 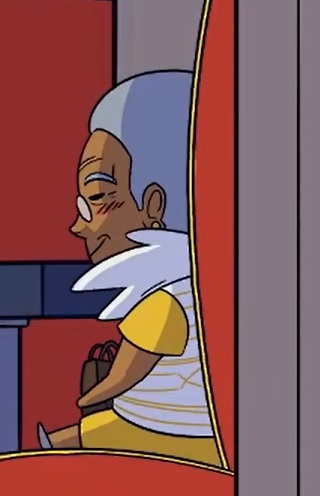 A world-renowned doctor and surgeon, and an old acquaintance of the Justice family going back several decades. Also a big tea drinker. Not the killer. 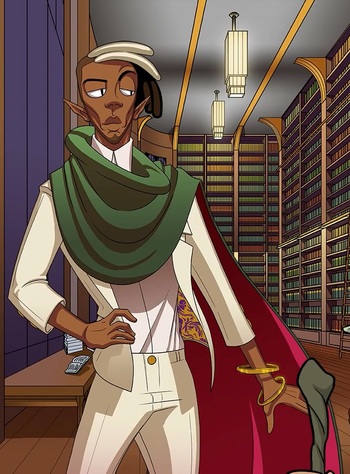 A classy inventor and animatronics major specializing in security. Is constantly coming up with ideas for new designs, but apparently needs some help brainstorming now and again. Not the killer. 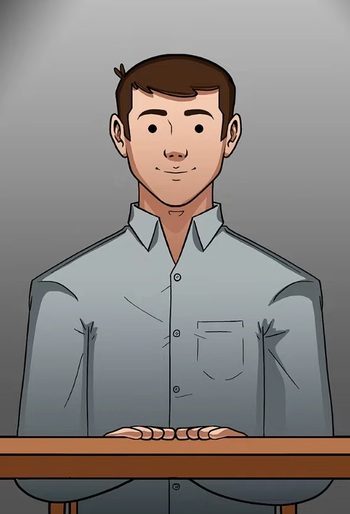 A police officer who went to the park on his day off. He has a good track record with a several successful arrests (a fair amount of them involving Harper) and generally lives a modest, simple life. Did not steal the dog. 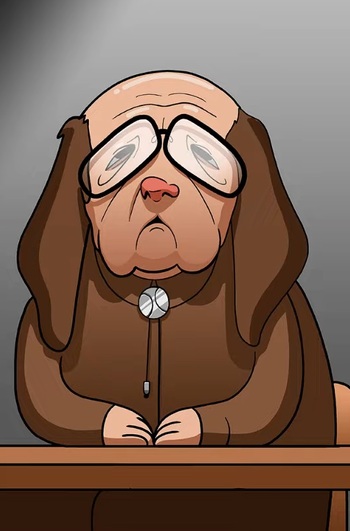 An eccentric and somewhat confused man who went to the park to read the newspaper (or as he calls it, "the newspapie"). Doesn't understand why anybody would confuse him for a dog. Did not steal the dog. 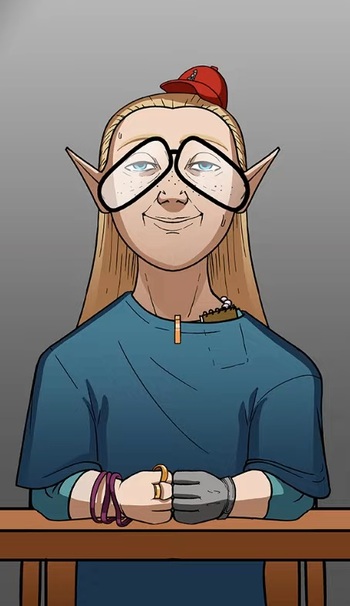 "It's so nice to have a teacher in the room."

A prolific thief who has been pickpocketing park guests for quite some time now. He's very skilled at his illicit craft, being able to without notice steal things even from people he's having direct conversations with. Nevertheless, he still maintains that he didn't steal the dog. He didn't, but he is indirectly responsible for the its disappearance.