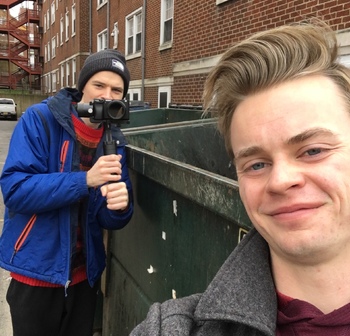 A lot more went into this picture than you realize.

note That's Rob on the left and Jeff on the right.

is a video creator who releases original content on Instagram. With the help of his roommate Rob Simmons, the two made it a goal to release a 60-second short every week starting March 4, 2019. This lasted throughout the rest of the year, with a conglomeration video on New Year's Eve to celebrate. Since then, Jeff has continued to upload videos sporadically while his creative partnership with Rob ended on pleasant terms. They also happen to be freelance videographers with experience on both commercial and creative film sets, so the production value of the shorts can have an extensive range.

Advertisement:
The Battery Bunch
The Battery Bunch is a 2015 band-fic based on the HHS drum line (and marching band by extension). The series revolves around the suburban exploits of Sean McSteweister's eight adopted teenagers: Jeffrey, Nathan, Dallas, Emily, Branden, Lewis, Tanner, and Essence. As it's name suggests, it draws inspiration from The Brady Bunch and other family values shows, and derives most of its humor from inside jokes, ironic sincerity, and Affectionate Parody.

The sections of the band are portrayed as parallel households, such as Le Front Ensemberu, who live under Sean's brother Tyler in a trailer in the boondocks, or the Donathan household, who live across the street from the Battery Bunch under guidance of Sean's long-time friend John Tyler Donathan. These households occasionally steal an episode or two, but the central coming-of-age arcs come from under the McSteweister roof.

The Battery Bunch provides examples of the following tropes: