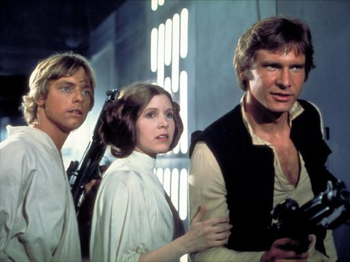 If you're traveling with a cowboy and a farmboy, you'd better bring a princess.
Advertisement:

The "feminine", "spiritual", and "heart", aspect of the Five-Man Band... and generally the only woman.

It's the people she gathers and keeps at her side who'll do a lot of the heavy lifting. She'll encourage loyalty and teamwork, give them the courage or hope to unlock their true potential, be a Token Good Teammate that keeps her friends from Jumping Off the Slippery Slope. She's usually a Nice Girl, but her demeanor can go anywhere from shy and demure, to brave and adventurous. She is rarely The Heroine of a story.

Her functional role will often be The Heart, the social influence of the group. Sometimes this means she'll serve as the Team Mom, taking care of the smaller details, both within the group and in the world outside. She looks after innocents, delivers The Aesop, mediates the arguments, and slaps some sanity on The Lancer before he ends up getting too dark. It's not the coolest job in the world, but it's helpful.

Yes, we understand that a male can fill this role, but this trope is a component of a Five-Man Band, which specifically uses women for this role. Examples of male characters acting in this way can be found in The Heart.

Examples of The Chick who doubles as another member