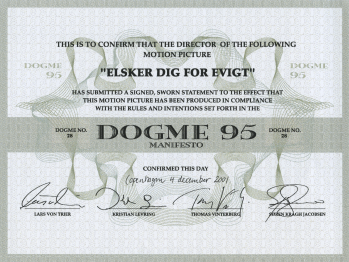 A film-making movement begun in 1995 by Lars von Trier and Thomas Vinterberg, in which the story, acting and themes of a film are favored over the extensive use of special effects or technology.
Advertisement:

Films must follow a specific set of rules in order to qualify for Dogme 95 status.

So far, fewer than 100 films have been identified as true Dogme 95 films, as the strict rules and guidelines are difficult to meet.

Independent directors have begun to stray from the traditional Dogme 95 formula, creating their own, more lenient rules for creating an artistic independent film. Originally the last point would've been the biggest stumbling block as it virtually guarantees always needing a day job, but with the quality and accessibility of digital video, 35mm has become something of an indulgence for indie filmmakers.