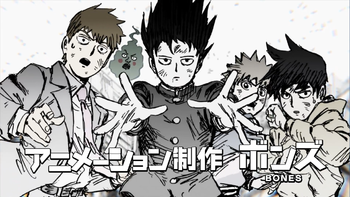 Shigeo "Mob" Kageyama (影山茂夫; Kageyama Shigeo) is a middle schooler with psychic powers linked to his emotions. Being stressed enough can charge Shigeo's abilities to world-shattering lengths, so he studies under Reigen and tries his best to avoid misusing his powers. Often socially awkward and sporting a expressionless face, he is more concerned about making friends and realizing his purpose in life than fighting dangerous espers or being the leader of a cult.

"You're the main character of your own life, Mob."

Arataka Reigen (霊幻新隆; Reigen Arataka) is a self-proclaimed psychic who owns a business that deals with exorcising ghosts. Reigen is very clever and has a way with words, so he can easily bring people under his sway. However, he also makes a point of solving his clients' problems and making them satisfied, no matter what it takes. 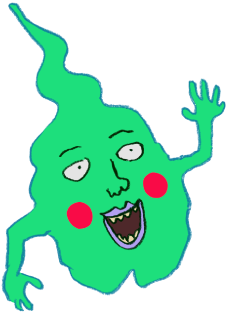 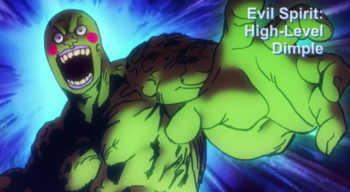 "Well, if you cannot go to paradise when you die, you can always stay with me."

Dimple (エクボ; Ekubo) is an evil spirit who wants to be worshiped as God by people. Mob happens to defeat his cult, so Dimple tags along in an effort to take over his body. He eventually mellows out and becomes a genuine friend to him, though.

"I do not accept losing to anyone besides my big brother."

Mob's younger brother. Ritsu Kageyama (影山律; Kageyama Ritsu) is great at exams and sports, popular among girls and a member of the Student Council, but greatly resents how he doesn't have Esper powers like Mob does. In spite of it, he loves Mob, and his well-being is a great priority. 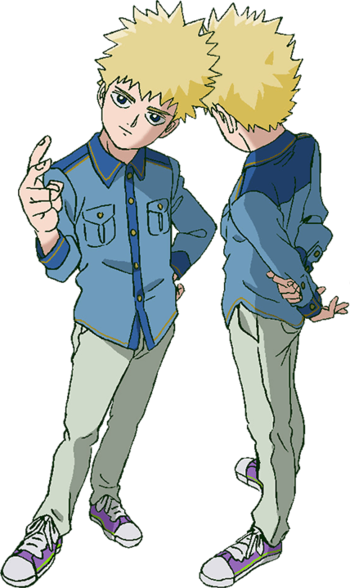 "A star is shining not because it's being showered in light, but because he who emits light is a star."

Teruki Hanazawa (花沢輝気; Hanazawa Teruki) is Black Vinegar Middle School's secret bancho note the leader of his school's delinquent group, an esper who held normal people in contempt and liberally used his powers to excel in everything. This changes once he faces Mob and is not only overwhelmed but also gets his motivations deconstructed by him. After his defeat, Teru becomes more humble and friendly to others and decides to train the young espers from the Awakening Lab. 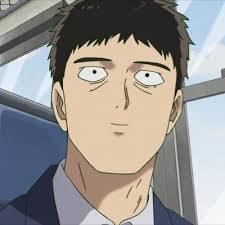 An ex-member of Claw who decided to take a job at Spirits & Such after the World Domination Arc. Despite having intense anxiety when it comes to social interactions, Katsuya intends to make a new start by helping others with his psychic powers while improving his own life.