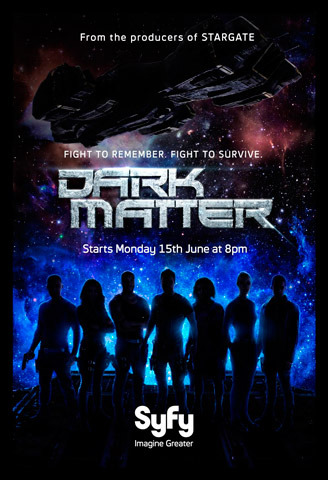 Three: [guns trained at One and Two] Who are you?
One and Two: [simultaneously] I don't know.
Two: Who are you?
Three: ...I got no idea.
Advertisement:

Dark Matter is a Canadian science fiction series based on the 2012 Dark Horse comic of the same name. The show was filmed in Toronto and premiered in June 2015 on Space Channel in Canada and SyFy in the U.S. It was created by former Stargate writers and executive producers Joseph Mallozzi and Paul Mullie, who also wrote the graphic novel together and act as two of the show's executive producers. The graphic novel covers the same events as the first two episodes of the show and was always intended to serve as a pitch for a TV series; the characters, concepts and main story arcs were imagined by Mallozzi over the course of his years working on Stargate.

At some point in the 27th century, the six-person crew of the spaceship Raza is awakened from stasis with no memories of who they are or how they got onboard and rename themselves One through Six in the order they woke up. Facing threats at every turn, they have to work together to survive a voyage charged with vengeance, betrayal and hidden secrets.

Despite being planned with a five-season story from the beginning, the show was cancelled on September 1, 2017

, the week after the Season Three finale aired. Although there was a strong fan campaign for the series to be picked up by another network

, nothing came of it, and the show was officially cancelled.

Following the news that the show had not been picked up, creator Joseph Mallozzi posted the first three episodes of "Virtual Season Four", breakdowns

of what would have happened in the season.