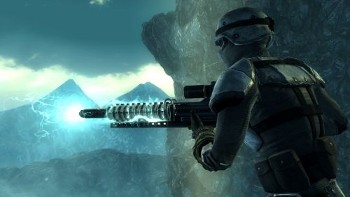 Call it a railgun, a magnetic accelerator, a mass driver, a MAC, a Gauss cannon, whatever, they all refer to the same category: a weapon that uses pressure of magnetic fields instead of an explosive chemical reaction to propel a projectile. This is a fairly common weapon in science fiction. In Real Life, they are only just beginning to enter military use (as of 2015), but have long existed as experimental devices and toys. The Other Wiki elaborates.