The characters of LA by Night. Characters without a 'played by' category can be assumed to be NPC's portrayed by storyteller Jason Carl. 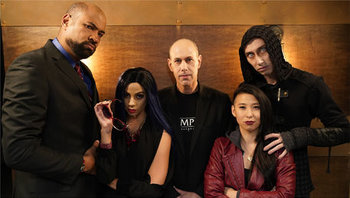 A vamily that lives in Los Angeles and struggles to stay ahead of the weirdness there. 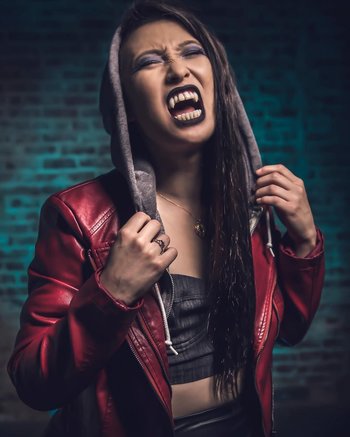 "I may be an idiot, but I have convictions."

"What's a point of life if you don't have somebody to share it with."

A Naïve Newcomer Brujah of the 13th generation who knows nothing about Kindred society. 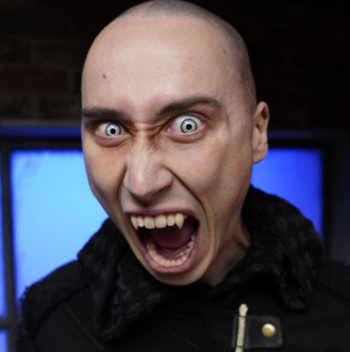 A snarky Nosferatu, he relies heavily on stealth and invisibility. He is one of the more humane members of the group but conceals a powerful dark side. He was forced to leave behind his old life behind and fake his own death when he became a vampire. 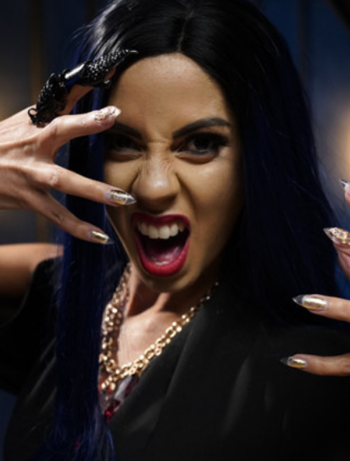 "I see you wore every single jewel that you own."

"You need to cry us a river, build a bridge and get over it, now."

A Toreador who uses her good looks and social skills to get what she wants. Although she might appear shallow at first she's aactually a savvy businesswoman who is fully capable of defeating an enemy twice her size. 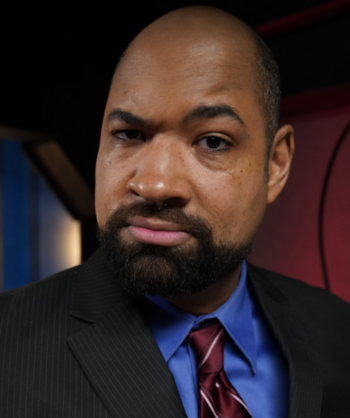 "The undisputed Baron of the Valley."

Played by: B. Dave Walters

The self-styled Only Sane Man who is a rich rap media mogul and Papa Wolf turned Ventrue Manipulative Bastard, who uses his powers to Mind Wipe both his foes as well as his friends and family. 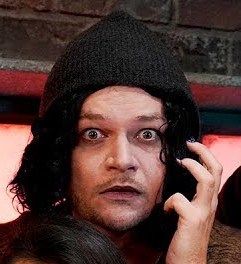 "Learn to do small good, don't think big picture or you're gonna end up a tomato smoothie."

X is a Malkavian who straddles the line between Fishmalk (a "wacky" mentally ill character) and a genuine depiction of his condition's tragedy. Here as even though he regularly makes appearances, he isn't part of the main coterie. 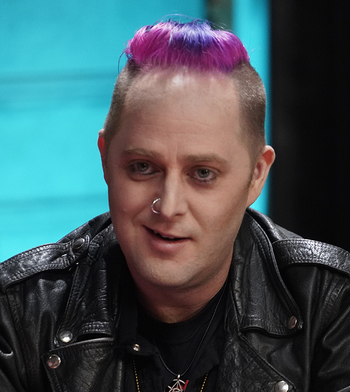 A Brujah and operative for the Anarch Free State and Annabelle's sire. 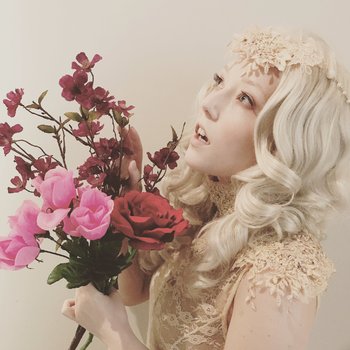 A vision in white.

A Tremere who the coterie turns to for magical advice.

"What horrible things did you find out about me?"

The Toreador Baron of Hollywood, and the financier of just about every single major American film made in the last few decades. 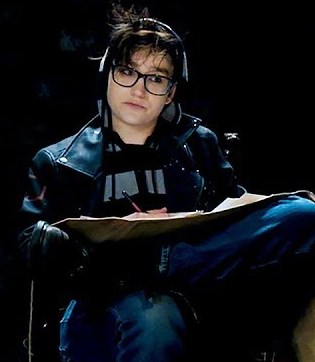 A Gangrel who occasionally works with the coterie. She looks as though she has been Embraced as a teenager and acts accordingly. She has the domain over the Griffith College after Victor became the Baron of the Valley.

An old rival of Victor's who is out for revenge. 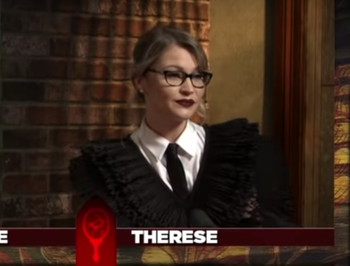 "I think we should give them a little something."

Malkavian and the Baron of Santa Monica. 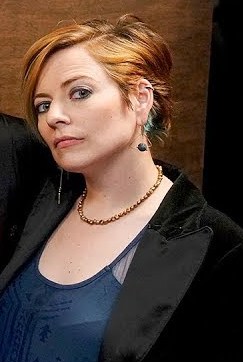 An experienced Ventrue businesswoman sent on behalf of Baron Abrams who turns up to give Victor advice and take half his territory to become the Baron of the North Valley. 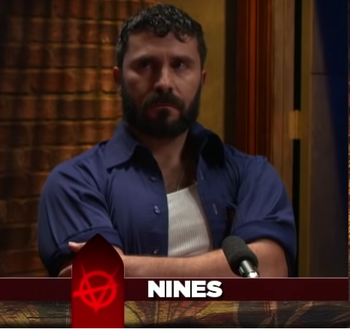 The Brujah Baron of Downtown and a famed warrior. 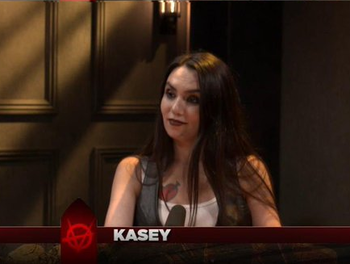 A Brujah member of the Valkyries biker gang. 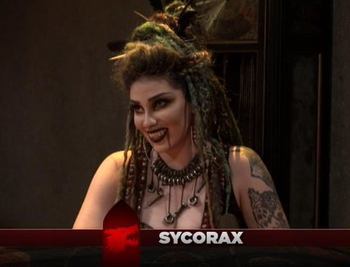 A Gangrel member of the Valkyries biker gang.

The leader of the Wyrd Sisters Tremere coterie.
Kyoko

A member of the Wyrd Sisters Tremere coterie.
Luna

A member of the Wyrd Sisters Tremere coterie.
Delilah

The leader of the LA Thin-Bloods. 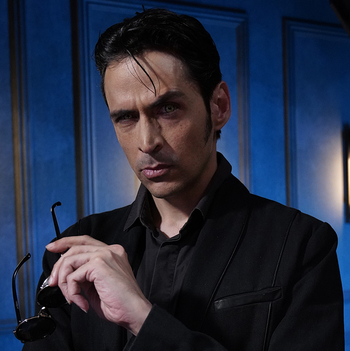 A Toreador and a member of the Camarilla. Nelli's sire who isn't above blackmailing her with her Dark Secret. 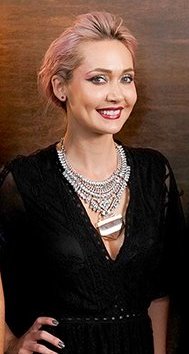 A high-class Toreador, host of the Succubus Club and a signature character from Vampire The Masquerade lore. She's a bon vivant and party-goer who wishes to become Prince of New York.

A Camarilla Ventrue of Victor's acquaintance. 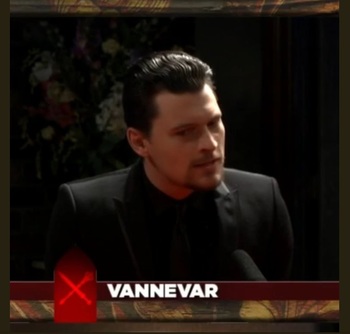 The former Prince of San Francisco, he has recently made a grab for L.A. A member of Clan Ventrue. 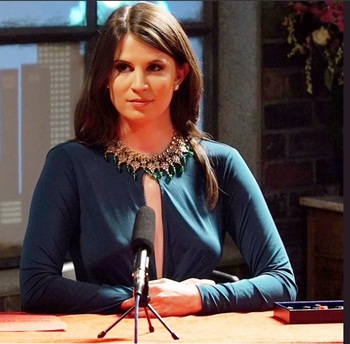 The consort of Prince Vannevar Thomas. She was once antiquated with Marie Antoinette. A member of Clan Toreador.

A powerful wizard who serves as the Keeper of Elysium.

A pair of Camarilla fixers that don't hate the vamily.

A brother and sister team of Lasombra that serve as Vannevar Thomas' Scourges. 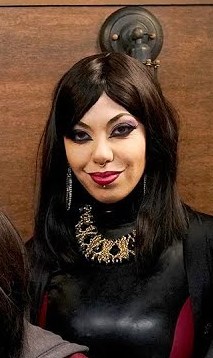 "We have... almost anything here."

A member of the Ministry (the 'reformed' Followers of Set). She runs a club in the Valley.

The leader of the Nosferatu in L.A. He is a former movie star turned monstrous information broker. 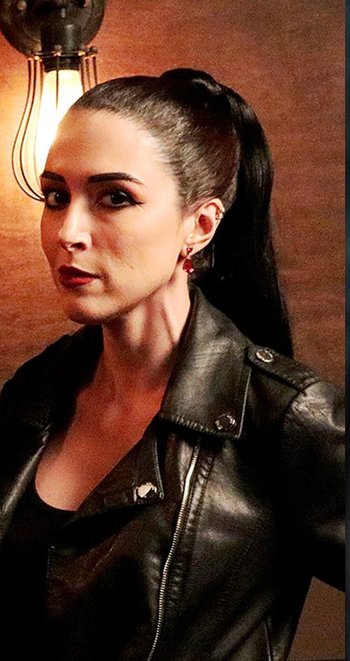 Victor's former bodyguard, driver and enforcer. She was born in the Middle East in the early 20th century and became Fiorenza's ghoul during the Great War. And as from Season 3, episode 5, a member of Clan Lasombra.

A pair of identical twin brothers that are children of Victor Temple. Mark is Annabelle's fiance and an activist while Isaiah is a wannabe gangster. 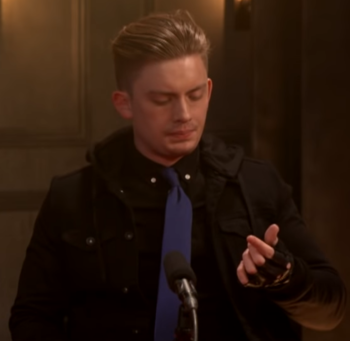 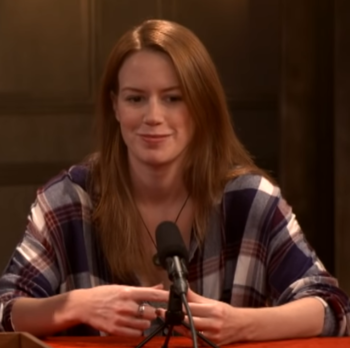 Annabelle's girlfriend and possibly childe/ghoul. Confirmed as her childe as of chapter 37. 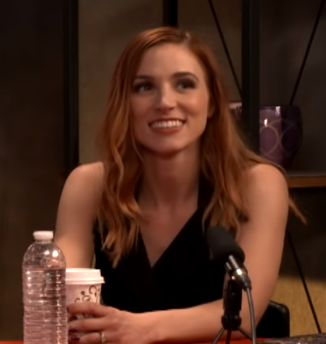 Jasper's girlfriend before he became a vampire.

One of Chaz's ghouls who comes to work for Nelli G.

A wraith that is a distant relative to Nelli G.
Patronella

A wraith that was also Nelli's ancestor.
Strikes A Chord 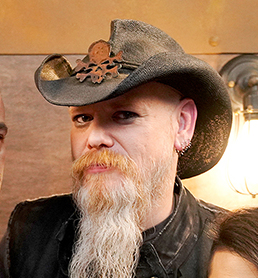 A Garou (or werewolf) of the Bone Gnawer tribe the coterie encounter.

In General
A group of NPCs encountered by Suzanne Rochelle when she enters a Memorium to remember details she's forgotten.
Francois Villon

The Prince of Paris, childe of Helena, and one of the most powerful vampires in the world.

The Queen of France during the French Revolution and Francois' ghoul.

The Warlord of the Camarilla and a terrifying Gangrel badass.

A Princess of Aragon and a Lasombra of great notoriety.

A Nosferatu geomancer and master architect.