Tennis Boss
aka: Playing Tennis With The Boss 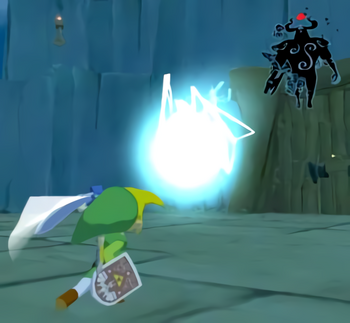 Link answers Phantom Ganon's serve with a forehand smash.
"Pretty much all of [the boss fights] are won by slapping their projectiles back at them like a game of interstellar Pong."
— Yahtzee reviewing Super Mario Galaxynote He's wrong, by the way. The only one that really follows this pattern is King Kaliente.
Advertisement:

Alright, this is it. You're facing the boss, and it's a big one. He's charging up an energy attack, just getting ready to launch it at you. What do you do? Do you dodge out of the way? Block with your shield? Scream like a little girl?

Nope. Swing, batta batta, swing! That's right, smack that ball of destruction right back towards 'im! If you're lucky, he won't be ready, and it'll hit him, leaving him open for a few good whacks with your Weapon of Choice. If you're not, he'll hit it back and the game is on. For the extra-challenging variety, the ball will speed up each time you do this, so that eventually, you're furiously mashing the button to attack again and again and hoping that the boss misses before you do.

Sometimes, the boss will let out a different energy attack that can't be deflected. If you hit that projectile, it'll probably explode and you'll be damaged.

Incidentally, it doesn't really count as Playing Tennis if the boss's light-based energy projectiles are simply reflecting off your Mirror Shield—rebounding the attack must require timing and reflexes.

It also should be noted that the first time you encounter this trope, you usually have no idea what to do. It's really one of those things that only makes sense in video games.

Why the boss feels the need to use the one attack that can damage itself at all is unknown.

Despite the name, this is not solely restricted to bosses. However, bosses are much more likely to fall into this behavior.

For instances where you play a literal, friendly tennis match against the boss, see Go-Karting with Bowser.

Just bouncing some spells back and forth in Duelling Club

Just bouncing some spells back and forth in Duelling Club