Food Wars! Main Character Index
Polaris Dormitory | 92nd Generation | 91st Generation | 90th Generation | Totsuki Academy | Other
This is the page for the characters of Food Wars! who do not fall into the category of students or staff.

All spoilers in the Mana Nakiri, Tamako Yukihira and Asahi Saiba entries are unmarked. You Have Been Warned!

The Town in General

The Sumire District is Soma's old hometown on the outskirts of Tokyo, where he grew up all his life until his father moved to the United States, enrolling him at his old alma mater, Totsuki.

Soma's father, head chef and proprietor of Yukihira, Joichiro travels overseas to cook and leaves his son to study and sharpen his skills at Tōtsuki, where he was a 69th Generation alumnus and Second Seat of the Elite Ten prior to his sudden departure. Despite not completing his education, he holds a reputation for his incredible talents.

Failures are just the mothers of success!

Joichiro's wife and Soma's mother. Tamako died five years prior to the main storyline, but she played an important role in the lives of her husband and their son. 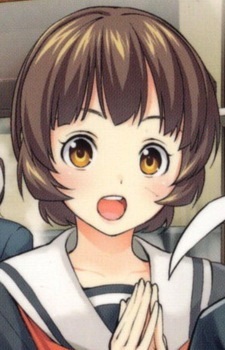 Soma's childhood friend and regular client of the Yukihira, Mayumi appears in the pilot chapter, but lacks presence in the story. 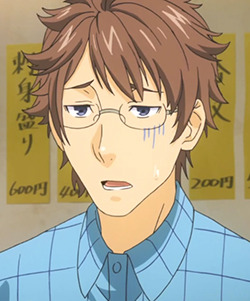 One of Soma's neighbors, chairman of the Sumire Shopping District and the second-generation owner of the convenience store Tomitaya. 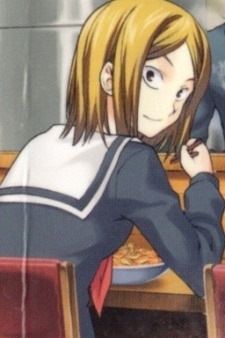 Mayumi's best friend and an old schoolmate of Soma prior to his departure for Totsuki. 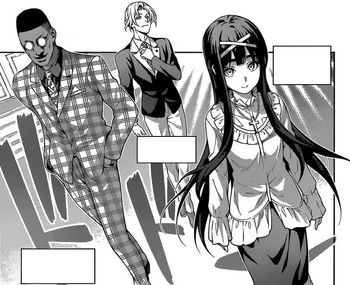 From left to right: Histoire, Charme and Anne

The World Gourmet Organization (WGO) evaluates the restaurants of haute cuisine and awards the best restaurants up to three stars. Every year, their evaluation is published in a guide that is commonly called "The Bible" or "The Book", while their examiners are called "The Bookmen".

A First Class examiner of the WGO, who serves as one of the three judges of the Team Shokugeki, the Régiment de Cuisine, between Azami's Council of Ten and the Totsuki "rebels".

A Second Class examiner of the WGO, who serves as one of the three judges of the Team Shokugeki, the Régiment de Cuisine, between Azami's Council of Ten and the Totsuki "rebels".

A Second Class examiner of the WGO, who serves as one of the three judges of the Team Shokugeki, the Régiment de Cuisine, between Azami's Council of Ten and the Totsuki "rebels".

A Second Class examiner for the WGO, selected as judge for the second gate of the BLUE in Tokyo, Japan. 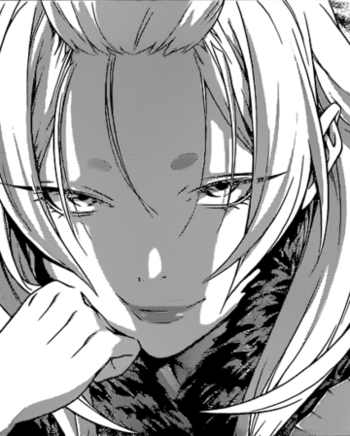 The estranged mother of Erina and daughter of Senzaemon, Mana is the mysterious CEO of World Gourmet Organization who organizes the prestigious BLUE competition. She's also known as the Bookmaster.

A selection of special guests assigned to judge the cooking dishes for the 43rd Autumn Election.

The judges for the Quarterfinals consisted of Totsuki's Director Senzaemon Nakiri, Ooizumi (chairman of Japanese Food Industrial Assembly), Saotome (a director of Japan Gourmet Association) and two other unnamed judges.

In General
Natsume and Orie Sendawara

A pair of twin sisters who are former poster-children and current head-owners of the Haubii Foodstuff, as well as the sponsors of the current edition. Natsume serves as judge from Block A, while Orie judges Block B in the preliminary round of the Autumn Election.

The head of the "Kita Gastronomy Club". He serves as judge from Block B in the preliminary round of the Autumn Election.

An essayist of fine cuisine and influential food critic. He serves as judge from Block B in the preliminary round of the Autumn Election.

The executive producer of the food-based television Show "Is That A Kitchen?". He serves as judge from Block A in the preliminary round of the Autumn Election.

A well-known gourmet. He serves as judge from Block A in the preliminary round of the Autumn Election.

President of the Japanese Food Industry Council and frequent judge at Tootsuki's culinary events. He serves as judge in the Autumn Election Semifinals and the "Survivors Hunt".

SHINO's Sous Chef and recently appointed as the Head Chef of the Tokyo Branch.

SHINO's Tokyo Head Hostess. She is in charge of the customers and taking the orders.

Owner and chef of a small bistro located in Paris, France. After Kojirou gets fired from the last restaurant he was working at, he offers him the job and place to crash. After Dugarry offered Shinomiya a job, Herve gave his old recipe books to the young man, who fondly treasures them. 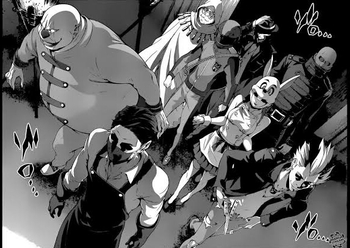 Every single noir, in any place, in any situation and with any ingredient can create a speciality dish.

A syndicate of chefs who work privately for Mafia organisations. They are the current threat to Erina's Tōtsuki administration. Its common for them to stake their lives and are Killed Off for Real if their dish has even the slightest flaw or shortcoming. 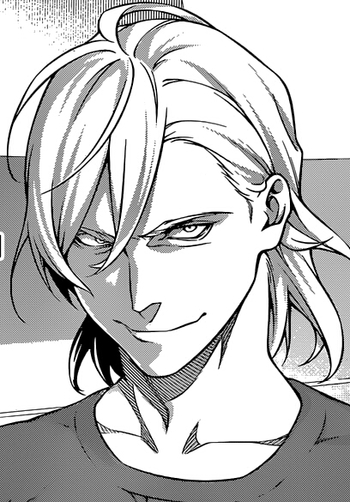 An American chef disguised as a tourist in Japan. He is the one behind the disappearances of restaurants and inns as he would challenge the owners to Shokugekis. Monarch specializes in premium ingredients. He was apparently defeated and had his knife confiscated by Sarge.

Asahi Saiba and his Squad 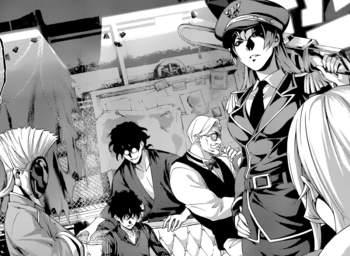 The Big Bad Squad
A group of the five best chefs of the Les Cuisinier Noirs with Asahi as their leader. All of them are allowed to skip the three preliminary gates of BLUE due to past achievements, although Sarge, Don Calma and Huang Zuiwang oversee the third gate trial. The following tropes apply to Asahi's subordinates in general.
Asahi Saiba 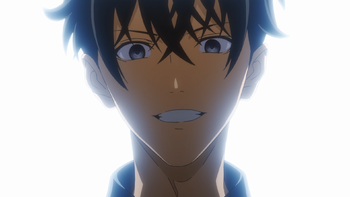 The leader of the Noirs who instigated the invasion of Erina's Tōtsuki. He is soon revealed to be Asahi Saiba, an orphan who Jouichiro took under his wing as his disciple 10 years prior note  Asahi isn't actually related to Joichiro but he began to use "Saiba" as his surname at some point of time. Asahi is the main antagonist of the Blue Arc. He wants to marry Erina so that he can become the ultimate chef note Based on Joichiro's advice that to become a great chef, one must meet a special someone who makes them give all their cooking to. Asahi participates in the prestigious BLUE competition where he and Erina are allowed to skip the three gates because of past achievements. Asahi's unique culinary ability is "Cross Knives" where he can instantly utilize the individual styles of various chefs by wielding their cherished tools. This ability can also be used to multiply the styles of different chefs to create new techniques. 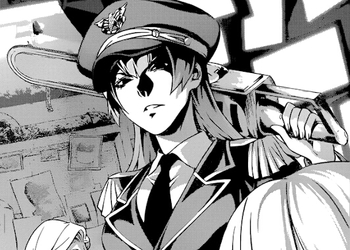 To Sōma: Show me your superhuman prowess!!!

A chainsaw-wielding woman in a formal military garb who is a member of Asahi's personal squad. Prior to the arc she was defeated and recruited by Asahi. Sometime later, she had defeated the Noir Monarch. Sarge is the gatekeeper for the third trial of BLUE, and is ranked higher than even Eishi. She participates in BLUE but gets defeated by Sōma Yukihira. 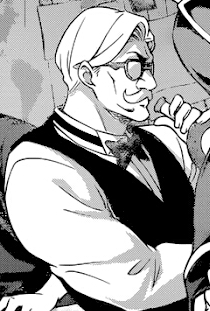 To Takumi: There is no way you can summon a chef who can stand up to our teamwork in an instant!

A Bocksbeutel toting henchman of Asahi Saiba. He is one of the few Noirs specializing in exceptional teamwork, the reason why he is pitted against Takumi. Don Calma and his team are defeated by Takumi and Soma in a team battle at Heaven's Keep. 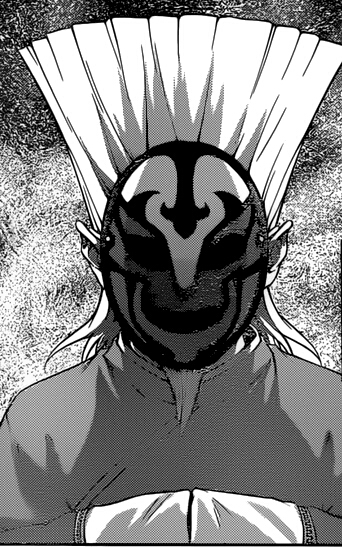 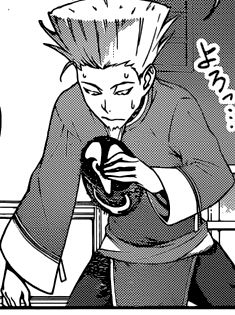 A masked subordinate of Asahi. His superpower is "Dish Venom" because he uses steel claws called Mó Liū Zhǎo (Claws of Black Death) which are designed to infuse food with seasoning blends. He was defeated by Megumi Tadokoro.
Yunosuke 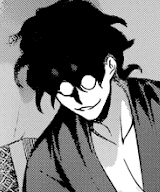 Asahi's aide and the one who had actually kidnapped Erina. Not much is known about him as of now. Apparently, Yunosuke was able to access the confidential information regarding the God Tongue and the situation of the Nakiri family. He also helped Asahi infiltrate Tōtsuki in the first place.

A ruthless businesswoman and land shark looking for land to develop at the expense of local businesses. Her latest target was the Yukihira diner until Soma's dish put an end to her endeavors.

One of the students who attempted to enter Totsuki alongside Soma. His family owns a French restaurant.

The DEF Kitchen has classes to teach young children from grades Kindergarten to the 2nd grade how to cook. There is also a class for housewives and middle aged women. The vegetables used in the classroom are supplied by Satoshi Isshiki who sells the vegetables grown in the Polar Star Dormitory plantation. Satoshi helps the school, usually teaching the housewives class due to his popularity with them. Another woman teaches the children's class. Soma and Megumi act as substitute teachers for the children for a day and managed to get the kids interested in cooking by different methods.

Head of Mozuya, a Kyoto-based karaage chain under Etsuya's consulting that threatens the Sumire District as part of its expansion plan in Kanto.

Third generation owner of Western Cuisine Mitamura, a restaurant suffering from sudden waves of clients coming from the new bullet train station. He is the first boss from Soma and Hisako's first Stagiaire week.

Alternative Title(s): Shokugeki No Soma Other