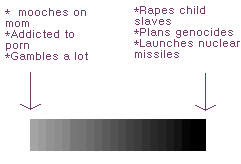 Revenge of the Nerds
Advertisement:

As always, it is important to remember that Tropes Are Tools. It can be taken to an extreme, where the choices are between Pure Evil and Good Because the Writers Say So. This can make the protagonist difficult to sympathize with and lead to Too Bleak, Stopped Caring.

For serious cases where both sides are so black there are no more shades of grey among them anymore, see Evil Versus Evil.

See also Shades of Conflict, Grey-and-Gray Morality, Black-and-White Morality, Crapsack World, Sliding Scale of Idealism Versus Cynicism. The inverse is But Not Too Evil. Contrast with White-and-Grey Morality, where everyone has some nobility to them, and Designated Hero, which is what happens when the story portrays a side as White when the audience sees them as Gray (or Black). Compare World of Jerkass if both sides are assholes.

If there are 'true' heroes around along with the 'kinda bad' and 'very bad' characters described above, it's The Good, the Bad, and the Evil. Coming from the opposite side is A Lighter Shade of Black, where an Evil Versus Evil conflict is left with one mildly sympathetic side by not making them as unrelentingly evil as their opponents, while both are still plain evil.