Film / Edge of Tomorrow
aka: All You Need Is Kill 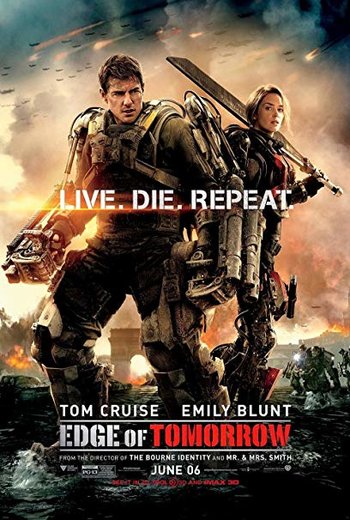 "Come find me when you wake up."
"Battle is the great redeemer. The fiery crucible in which the only true heroes are forged. The one place where all men truly share the same rank, regardless of what kind of parasitic scum they were going in."
— Master Sergeant Farell

Edge of Tomorrownote sometimes titled Live Die Repeat, after the above-noted tagline is a 2014 American sci-fi/action film based on the light novel All You Need Is Kill by Hiroshi Sakurazaka. The film stars Tom Cruise and Emily Blunt; it was directed by Doug Liman & written by Christopher McQuarrie, and produced by Warner Bros.

In the near future, an alien force known as the Mimics have invaded Earth. Humanity has fought the Mimics for years; when the planetary war reaches a seeming standstill, the military raises a massive force for an all-out assault meant to drive the Mimics back for good. Major William Cage (Cruise), an American PR officer, is roped into joining the first wave. The military strike fails in spectacular fashion, but Cage does manage to kill a strange Mimic during the assault. The blood that spews from the dying Mimic dissolves Cage's body; he dies on the beach where the strike began.

...and awakens the day before the strike.

Cage is now trapped in a "Groundhog Day" Loop of continuously repeating events; his only way out is with the help of Rita Vrataski (Blunt), a war hero who helped the military achieve a massive victory over the Mimics. Cage and Vrataski work together across numerous cycles of Live-Die-Repeat to improve Cage's abilities as a soldier and figure out how his predicament can ultimately push back the invaders for good.

This is probably the first time ever that Hollywood adapted a Japanese Light Novel. It only adapts the basic premise, though—past the first act, the film and the book follows vastly different storylines.

Warner Bros. announced a sequel, Live Die Repeat and Repeat in April 2016. When it will come out given the director and its leads are busy, it's up in the air.

Alternative Title(s): Live Die Repeat, All You Need Is Kill