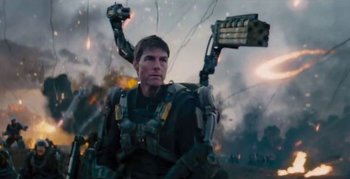 Played By: Tom Cruise
An Armchair Military major in the USAF, who is mostly just a PR guy. The film starts with him getting sent on the frontlines to film the invasion; when he tries to blackmail his way out of it, he is instead demoted to private and sent straight into the grinder.
Rita Vrataski

The Angel of Verdun, the hero of the first battle humanity won against the mimics. She killed hundreds of mimics on her first day of combat, and a marketing campaign centered around her recruited millions of soldiers to the cause.

Cage's sergeant, who takes special pleasure in explaining how Cage is a deserter who will be forced into combat.

A British general with a strong dislike of cowards and a massive stubborn streak. He is the one who sends Cage to the front lines.

A scientist who was studying the mimics before he was demoted because his ideas were dismissed as too radical. He is the only other person besides Rita who knows about Cage's looping ability.

A tough, hardened private who's best friends with Griff. He often picks on Cage.

The only woman on J squad.

A bombastic private who claims to be on his twentieth mission, to the disbelief of his squad mates.

By far the biggest member of J squad, he is known for going into battle naked (besides his Jacket).

A silent member of J squad.

Aliens who invaded the Earth via a crashed meteorite. They have never given any explanation or attempted to communicate with humanity, preferring instead to slaughter indiscriminately.

Big, blue, and extremely rare (roughly one in sixty million mimics is an alpha), the alphas are the battlefield leaders of the mimics.

The ultimate leader of the mimics, it is immobile and never seen on the battlefield. Only a very rare number of people even know it exists.