This page details the various characters of Outlast, Whistleblower, and The Murkoff Account. Please also note that there are unmarked spoilers ahead, so read at your risk. 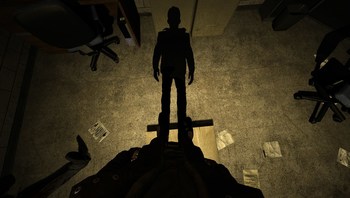 Voiced by: Shawn Baichoo
"Fuck this place. Seriously, just fuck this place. Dying keeps moving lower on the list of the worst things that could happen to me here."

The Player Character of the main game. Miles is a Freelance Investigative Journalist summoned to Mount Massive Asylum after receiving an email from Waylon Park (the main character in Outlast Whistleblower) about some suspicious activity going on the Asylum. Equipped with only a camcorder, Miles enters the building and quickly discovers something more sinister is going on.

Waylon Park
Voiced by: Shawn Baichoo
"Lisa, baby, I'm so sorry. I fucked up. I thought I was doing the right thing. But I fucked up bad."

The Player Character of Whistleblower. Waylon was a Software Engineer for the Murkoff Corporation, until he discovered they were performing illegal experiments and sent an email to Miles Upshur in hopes of exposing the company. He is then caught by security and tortured just like the inmates were. Waylon manages to free himself when the riot starts, though, and is now trying to escape the Asylum. 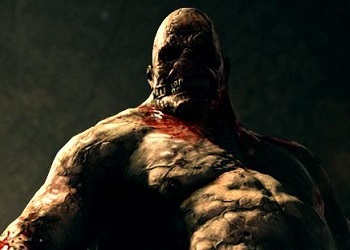 "Little pig."
Voiced by: Chimwemwe Miller
"We have to contain it."

A hulking, deformed ex-soldier who was committed to the asylum for PTSD. He now roams the halls of Mount Massive seeking out and killing everyone he finds. 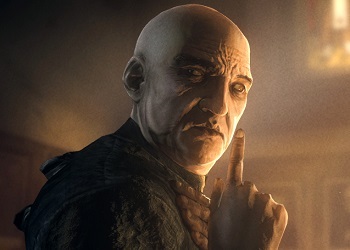 "The only way out of this place is the truth. Accept the gospel and all doors will open before you."
Voiced by: Andreas Apergis
"Merciful god, you have sent me an apostle. Guard your life, son, you have a calling."

A strongly religious ex-patient who believes himself to be a prophet of his god, and is convinced that it is his duty to spread its gospel. 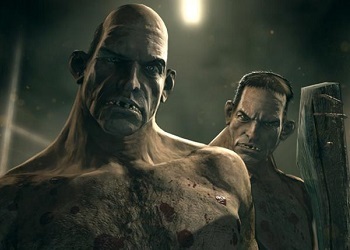 "His tongue and his liver." "Yours." "Mine."
Voiced by: Neil Napier (Tall Twin) and Alain Goulem (Shorter Twin)

Mysterious and psychopathic twin Variants whom Miles encounters after being abducted by Father Martin and transported to the prison. 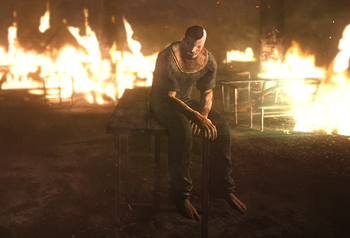 A variant encountered in the burning cafeteria. He doesn't attack Miles at first, and instead explains that he caused the fire, and had reasons to do it... 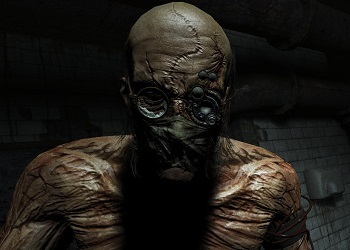 "Let's teach you the seven habits of highly eviscerated people."
Voiced by: Alex Ivanovici
"God died with the gold standard. We're on to more concrete faith now. You have to rob Paul to pay Peter, there is no other way. Murder in its simplest form, but what happens when all the money is gone? Well, money becomes a matter of faith. And that's what I'm here for. To make you believe."

Formerly an executive at Murkoff, Trager became insane after the downfall of the asylum and now experiments on patients in order to gain more knowledge about biology. Despite his cheerful and friendly demeanor, he is a sadistic psychopath who revels in torture and death. 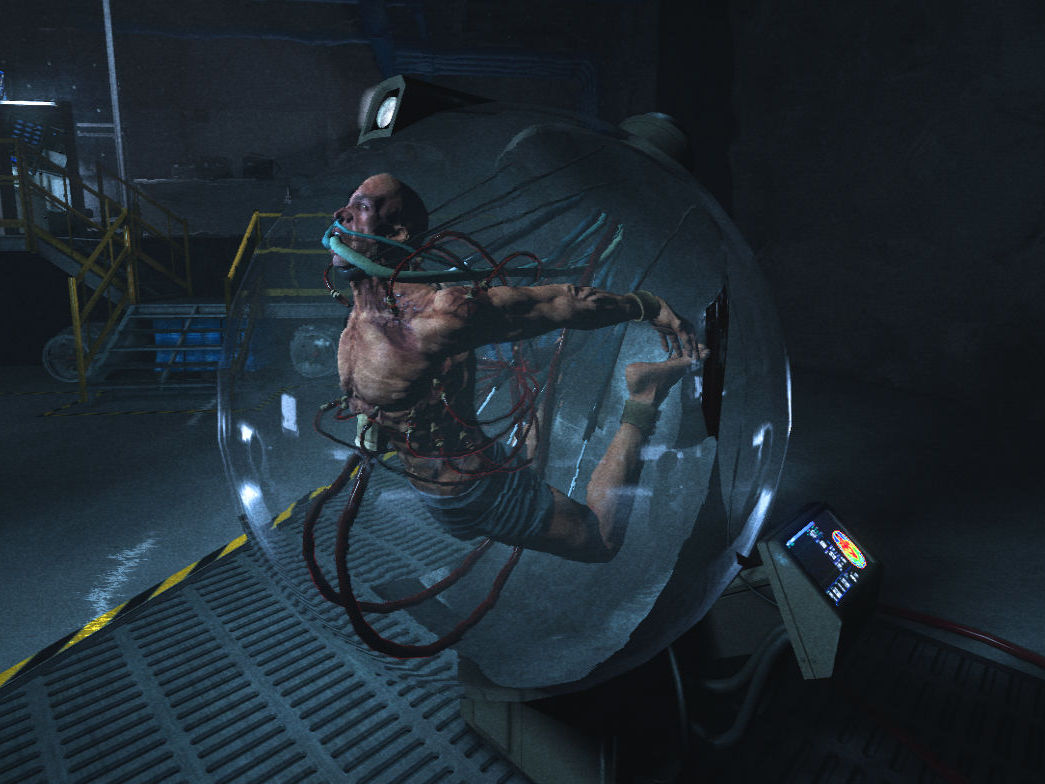 The host of the Walrider. 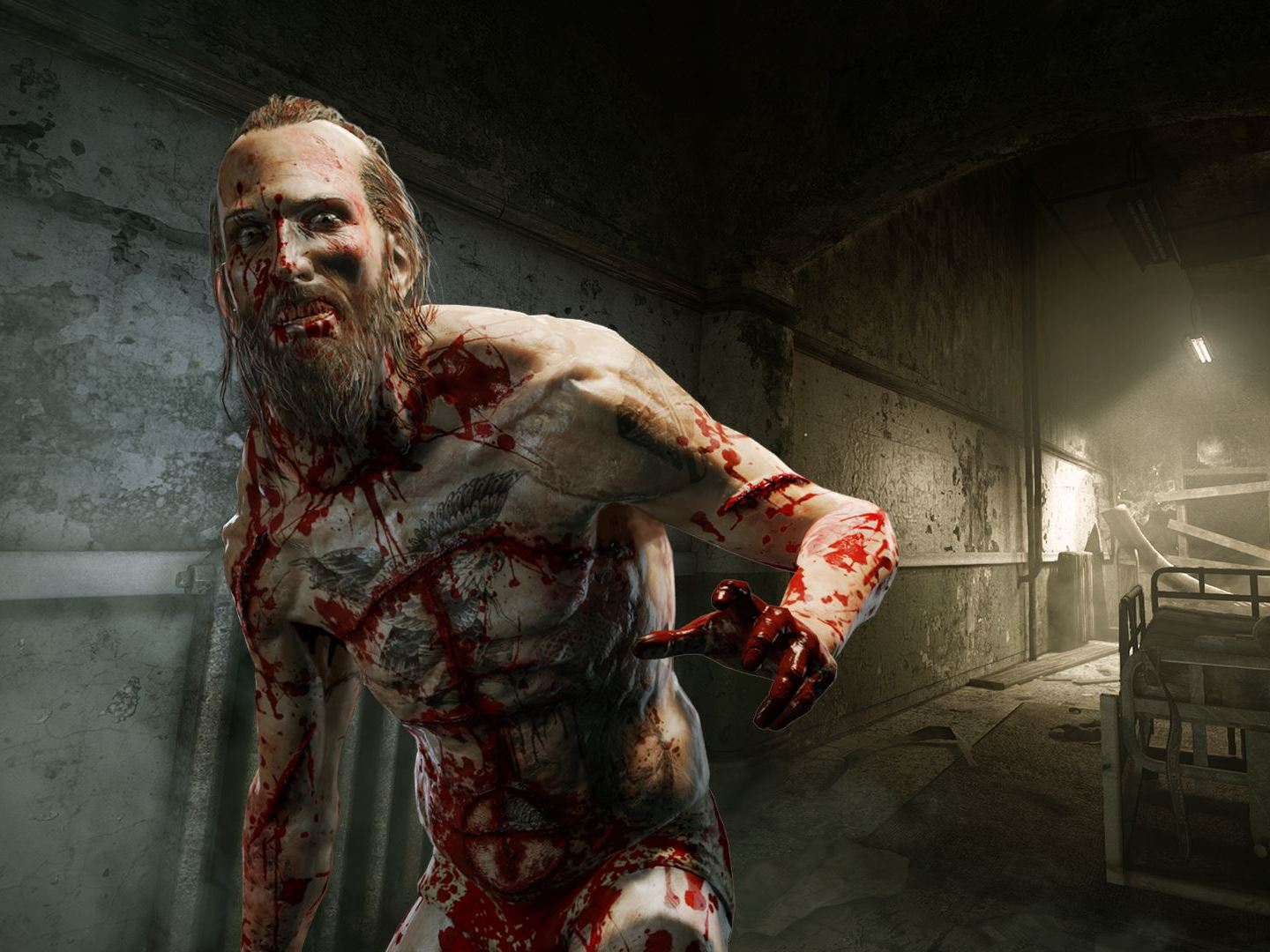 "Gorgeous. Just the smell!"
Voiced by: Edward Yankie
"MINE! YOU ARE MINE!"

An insane cannibal who pursues Waylon with an electric buzzsaw, hoping to kill and eat him.

Eddie Gluskin A.K.A. The Groom 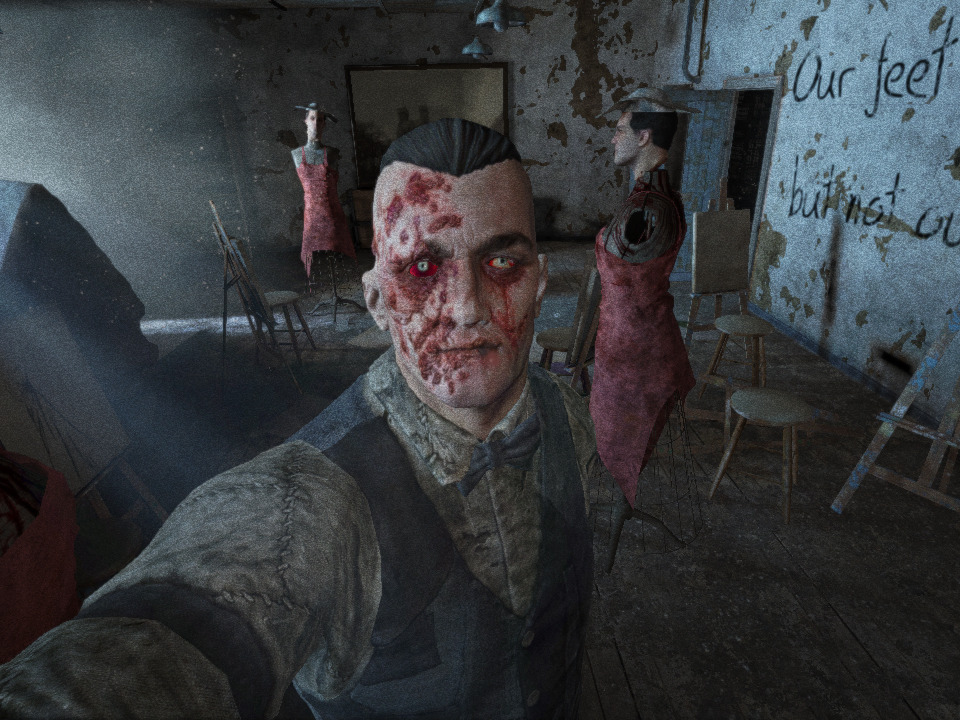 "You're going to be beautiful."
Voiced by: Graham Cuthbertson
"When I was a boy, my mother often said to me, "get married son, and see how happy you will be." I have looked all over, but no girlie can I find, who seems to be just like the little girl I have in mind..."

Even before being committed to Mount Massive, Gluskin was a misogynistic serial killer obsessed with the idea of finding a perfect wife, who killed and mutilated women in his attempts to create one. After the staff lost control of the asylum, Gluskin began mutilating other men to make them look like his ideal woman, and relentlessly pursued Waylon in an attempt to do the same.

"Dissociative" Dennis
Voiced by: Daniel Brochu
"There's a leak... Pissing down on us. Water takes everything apart... down on us. Up from the sewer, that puts us... Water and time could drill a hole in anything."

A patient at Mount Massive suffering from Dissociative Identity Disorder, who hopes that offering "sacrifices" to Gluskin will prevent Gluskin from killing him. He has four split personalities who often converse and argue amongst themselves.

Patients 14306-8, 14279-1 and 14868-1
Three patients at Mount Massive and subjects of the Morphogenic Engine. Scattered documents claim that they were considered more "successful" than Billy Hope, and that even Wernicke was unaware of their potential as "lucid dreamers." They were secretly removed from the facility under heavy security before the breakout. They are physically blind, but "not unseeing."

The Murkoff Corporation is the company behind the reopening of Mount Massive Asylum. While appearing as a charitable organization to the public, they are in fact a highly immoral research organization holding incredibly dangerous technologies that they use to perform experiments on humans. The company apparently has multiple research projects at multiple locations, with Mount Massive Asylum being the grounds for their Walrider Project. 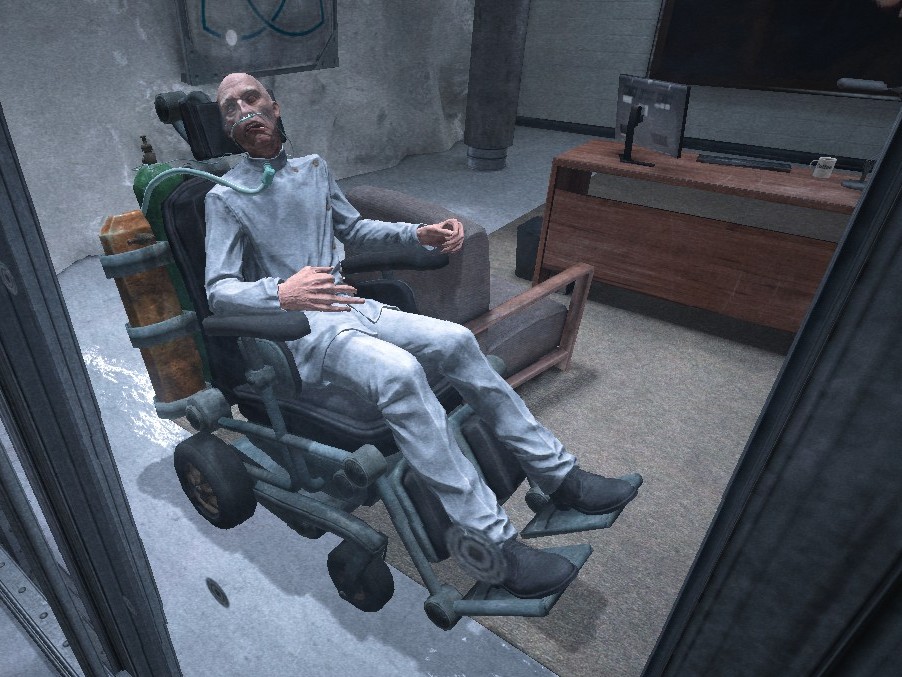 "Nothing is supernatural."
Voiced by: Marcel Jeannin
"My homeland in those years... it's impossible to understand. The things we felt. What we believed. The overwhelming fear, extatic rage, and... English words are insufficient. More than hope. A human mind in that environment is capable of extraordinary things."

One of the researchers who worked in the hidden research facility beneath Mount Massive Asylum and the co-founder of the Murkoff Psychiatric Systems. He was the main scientist behind the whole Walrider experiment and the primary antagonist of Outlast. 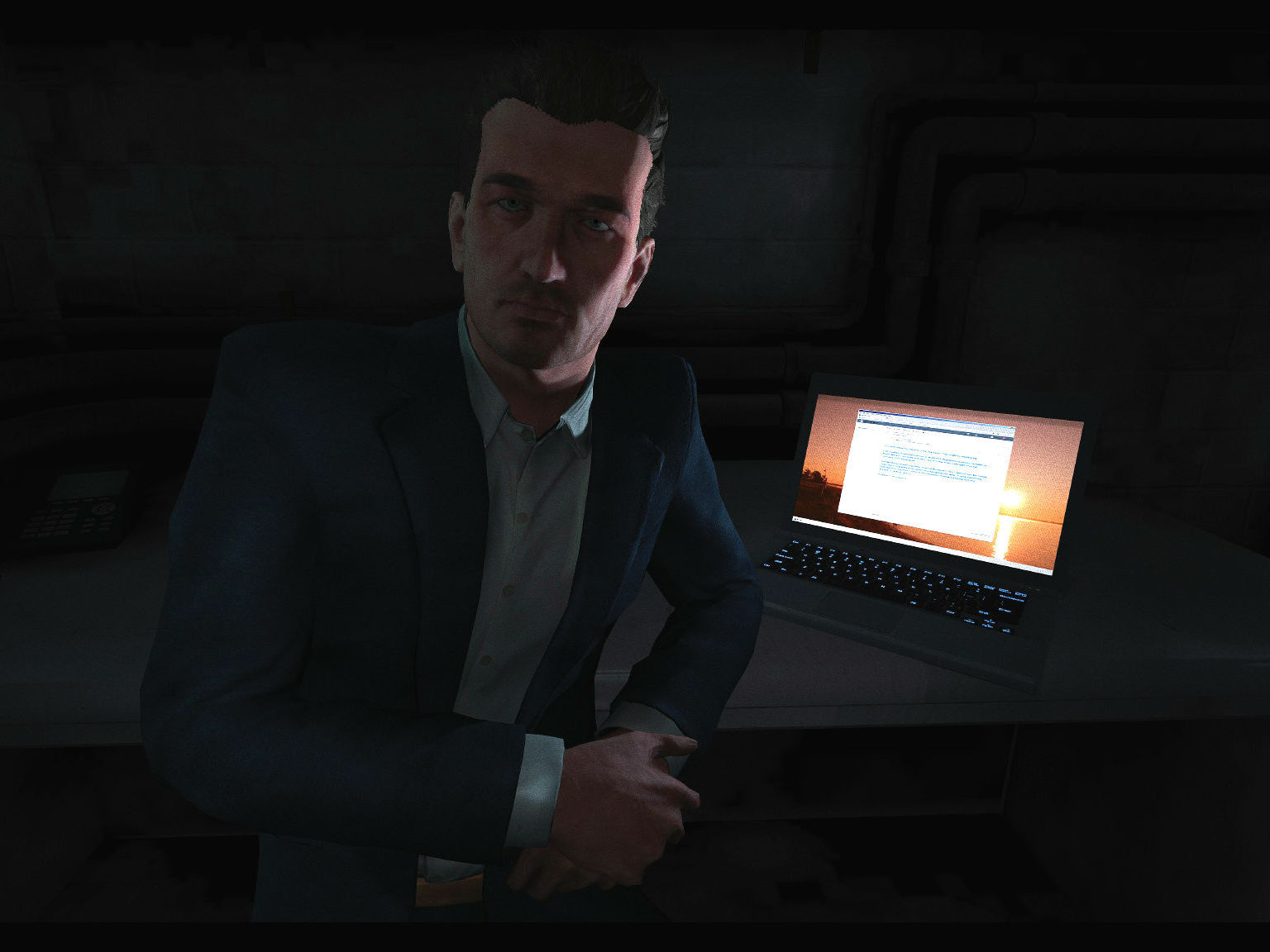 "Somebody's been telling stories outside of class."
Voiced by: Matt Holland
"The Murkoff Corporation and the onward march of science both appreciate your bravery and sacrifice."

One of Murkoff's high-ranking officials, the head of Mount Massive Asylum and a supervisor to Waylon Park.

Mount Massive Security Guards
Murkoff's security guards were instructed to protect Mount Massive Asylum in the event of a patient breakout at all costs. During the patient outbreak, most of them were left unarmed due to needing a high-security clearance to gain access to decent weaponry, leaving many with only their muscles and fists to defend themselves.
Murkoff's Tactical Division

Murkoff's Tactical Division, also known as Murk Tactical, refers to a group of Private Military Contractors (PMCs) employed by the Murkoff Corporation. In lieu of their training the tactical operators are also seen to be in possession of high quality gear such as heavy flak jackets and automatic weapons as well as MRAP vehicles. Despite being heavily armed, most if not all of them were butchered by the inmates and the Walrider.

Stephenson was a team leader of a group of Murkoff's personal mercenaries, sent to stop the havoc at Mount Massive Asylum caused by its patients and the Walrider. 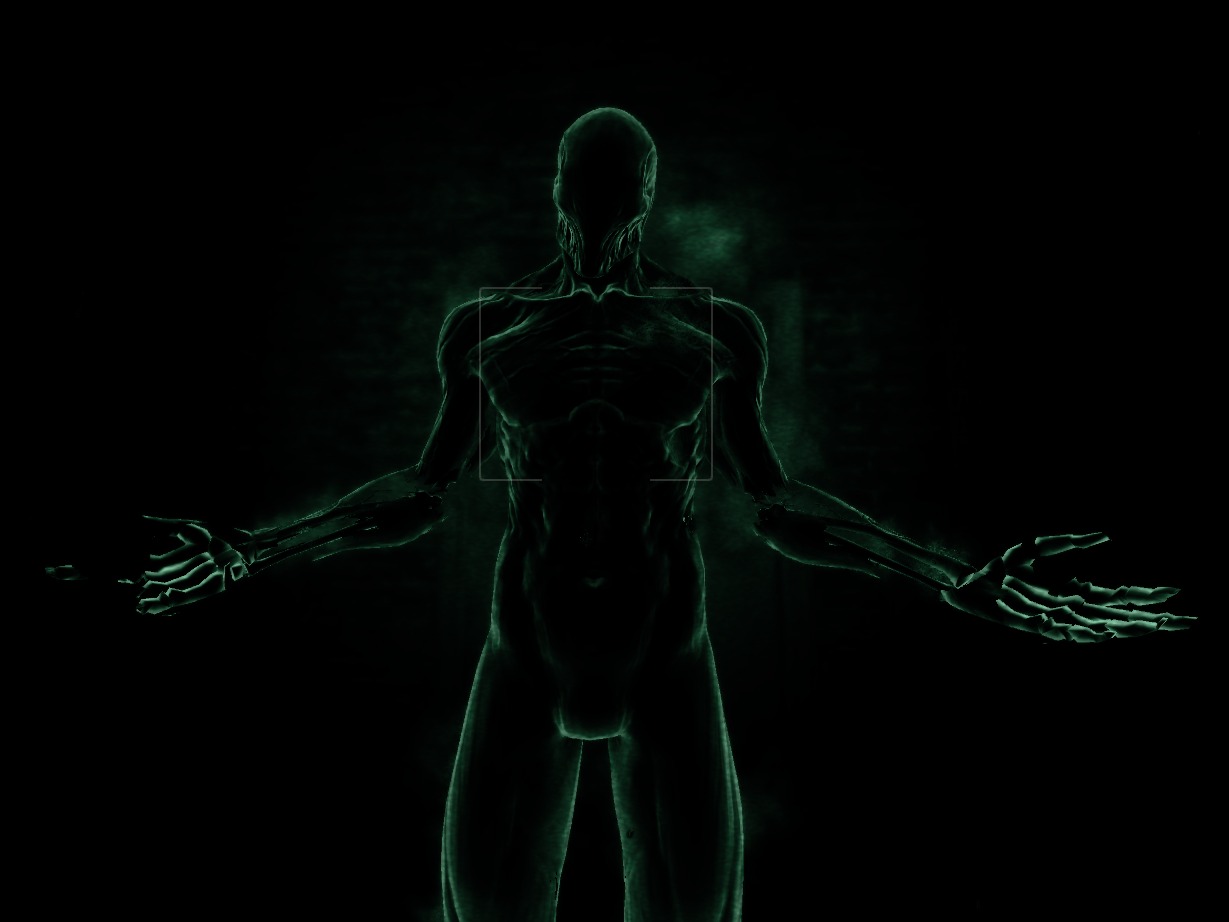 A man-made ghost created by Dr. Wernicke. Described as a humanoid swarm of nanomachines produced by biological functions through the Morphogenic Engine, its host is currently Billy Hope, and Father Martin's mad religion focuses on the worship of the Walrider.

A mysterious former Murkoff employee working to expose the atrocities of the Murkoff corporation.