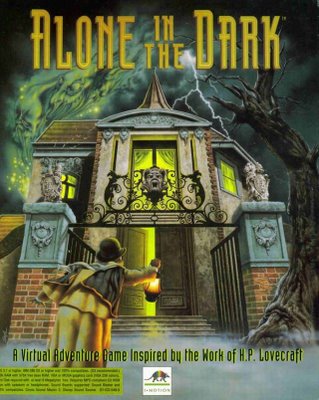 Alone in the Dark (Infogrames, 1992) is an Action-Adventure game and the progenitor of the Survival Horror genre, or at least outside of Japan, where Sweet Home (1989) was released three years earlier. It was also the first game to feature 3D polygon characters over fixed 2D backgrounds, allowing for cinematic camera angles. Featuring a mix of combat, puzzle-solving, inventory management, and exploration, the game was well-received and made a rather large impression at the time. Set in the 1920s, the game had players take the role of private detective Edward Carnby or socialite Emily Hartwood, who were locked in the haunted mansion of Derceto, searching for a way out while battling zombies, monsters, and a lurking evil inspired by the works of H. P. Lovecraft.

Alone in the Dark 2 (1993) is more linear and combat-oriented, featuring a tommygun-wielding Edward Carnby facing off against 1920s mobsters led by the villainous One-Eyed Jack to rescue kidnapped child Grace Saunders. As it turns out, Jack and his gang are in fact immortal pirates, the crew of the Flying Dutchmen, who made a pact with witch Elizabeth Jarret and perform regular human sacrifices to retain their life and youth. There were also a few stealth segments where players took the role of Grace Saunders and had to evade the mobsters searching for her.

Alone in the Dark 3 (1994) takes place in an abandoned Wild West ghost town, with Carnby attempting to save Emily Hartwood (who was filming a western film along with a film crew in the deserted town), who has inadvertently awakened the ghosts of the town's evil inhabitants, led by prospector Jedediah Stone. Although still linear, the game featured a more balanced mix of combat and puzzle-solving.

Alone in the Dark: The New Nightmare (2001) is a re-imagining of the series. Taking place in modern times, the game featured a new protagonist - also named Edward Carnby (No relation) - who teams up with linguistic expert Aline Cedrac to unravel the mystery of Shadow Island and its reclusive inhabitants, the Morton family. This ultimately puts them into a battle against the Creatures of Darkness, reptilian shadow monsters originating from an underground underworld known as the World of Darkness. The game featured many control, gameplay, and presentation elements taken straight out of the playbook of Resident Evil. Its most unique feature was the use of the flashlight to reveal hidden details of the environment, as well as to drive back some of the light-sensitive monsters.

In 2008, a new game in the series was released, rebooting the franchise. Known simply as Alone in the Dark (later given the subtitle Inferno when it was ported to the PlayStation 3), the game features the original Edward Carnby from the original games, waking up in modern day New York City alive, unaged, and with a major case of amnesia just in time to witness living fissures wreck the city and turn many of its inhabitants into vicious monsters. Taking place in Central Park, the game was a Gameplay Roulette featuring elements of First Person Shooters, Third-Person Platformers, Driving Games, Beat Em Ups, etc. It also borrowed quite a bit from Boll's film; this was not prudent.

The franchise was sold to THQ Nordic in 2018. In August 2022 they announced a Continuity Reboot remake inspired by the original game, named simply Alone in the Dark, scheduled to be released in 2023. The developers describe it as a third-person over-the-shoulder survival horror game, akin to Resident Evil 4, though with a greater emphasis on plot, atmosphere, and a sense of dread.