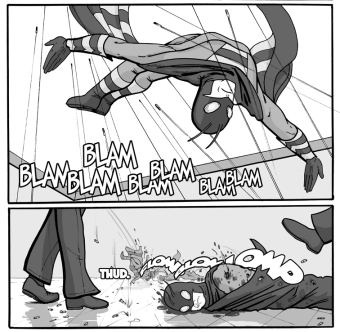 Float like a butterfly, sting like a bee.
Try to dodge bullets and you'll end up like me.
If you saw a movie that was like real life, You'd be like, "What the hell was that movie about?
It was really all over the place."
Life doesn't make narrative sense.
— Josh Groban, Crazy Ex-Girlfriend: ""The End of the Movie"

Somebody thought they were protected by the power of narrative convention. Then, they were met with a Surprisingly Realistic Outcome, and learned how wrong they were.

By definition, fiction is unrealistic. But most of those who indulge in media don't ask for their stories to be completely like reality. As long as things are kept internally consistent, an audience is willing to go along with just about anything an author can create... no matter how irresponsible, immoral or unhinged their more likeable and sympathetic characters might be acting by the standards of Real Life. For that reason, a creator can sometimes ignore or Hand Wave consequences of the real world in their stories, even when they've Shown Their Work. This trope, though, is about what happens when a creator chooses not to ignore said consequences, and even factors them in as part of the plot or events.

This can sometimes be seen on the hard end of the Sliding Scale of Idealism vs. Cynicism, though it isn't necessarily so since realism, despite what many claim, is not the same as cynicism. There are many realistic stories that run on optimism.

Generally, this trope is not used in order to make fiction completely and entirely mirror mundane everyday life... except when it is. This is also surprisingly often used as a Comedy Trope. Contrast Fantasy All Along, when reality ensues and immediately afterwards fantasy kicks in again (occasionally undoing the damage done by the "reality" moment).

Note that, when we say "reality", we mean reality as in Real Life. We have "X happens" and "Y happens as a consequence of X"; the Y must not involve the fantastic in-story aspects of the work's own universe. For realistic consequences of unrealistic superpowers, see Logical Weakness.

The Extraordinary World, Ordinary Problems trope is a variant. Also related to Deconstruction and Deconstructive Parody, and is mainly used for comedy.note The difference between this trope and Deconstruction is the outcome, oddly enough - where deconstruction goes for a logical and realistic outcome under the rules employed (say "magic exists" + "some people are crazy/evil" = "fireball-throwing maniacs using magic to commit crime"), as mentioned this trope goes for a logical and realistic outcome under Real Life rules, i.e. "magic does not exist" and people believing it does are just weirdoes.

When done right, Hilarity Ensues can and will overlap. Do note that this is not strictly a "humor" trope: the defiance of a fantastic element can be a pretty powerful tool for deconstructive drama and sometimes even horror.

Characters who use this to their advantage almost invariably are Genre Savvy. A Wrong Genre Savvy character has chances to be hit hard by a Surprising Realistic Outcome. The No-Nonsense Nemesis runs entirely on this trope played for drama and sometimes horror. Violates No Ontological Inertia when things do not automatically change because one thing comes to an end.

This trope is sometimes used to counter Insane Troll Logic.

Since this trope is entirely about outcomes happening under the rules of Real Life, real life examples would be redundant. If you want more detailed information on this, see Television Is Trying to Kill Us, a detailed list of why many different fiction tropes would not only not work out well in real life, but will end in disaster for anyone who actually attempts to do it.

Contrast, of course, Reality Is Unrealistic, for examples where realistic outcomes don't appear realistic on the surface.

Please Note: Before adding your examples, make sure it qualifies. This trope is not for any instance that is realistic, even if it is unexpected. In most cases, it doesn't count if it's an Anticlimax Example It turns out the woman had left while the two men were arguing for an hour, Fridge Logic Example Of course a policeman is going to be competent at takedowns, even if he acts like an idiot most of the time, the obvious outcome Example He tries to pick up his car to throw at the zombies, but it turns out an ordinary person can't lift a 2 ton machine, or taking into consideration something that is usually ignored Example In this game you actually have to consider the effect gravity has on your ship instead of being able to zip in a straight line to your destination.

Warning: As this trope frequently occurs at the climax of a work, spoilers are likely to be unmarked. Caution advised.

SpongeBob repeatedly sneaks into the animal enclosures at the Bikini Bottom Zoo, which in real life, is not allowed.

SpongeBob repeatedly sneaks into the animal enclosures at the Bikini Bottom Zoo, which in real life, is not allowed.