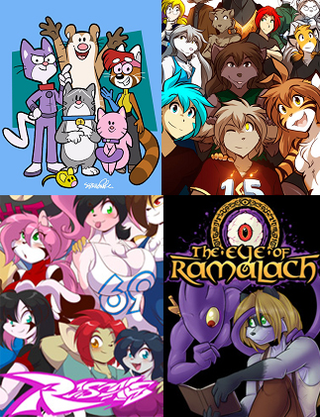 So you've got this idea for a story with anthropomorphic animals. But you don't know how to execute it. You can't do anything with live action, these characters don't exist in the real world and costumes are clunky. You can't make a cartoon, animation is incredibly expensive and time-consuming, especially if it's a one man job. And you could write a book, but traditional literature has a tendency to go overlooked. So what are you to do?

In this situation, creating a webcomic is the best way tell the story you wish to tell. It's more eye catching than prose, it's just a few stationary frames and some words at a time unlike animation, and you don't have to worry about the limitations of make-up as you would with a camera and some actors. That, and the fact that it's a comic on the web means you can upload it more easily than getting it published and it'll reach a wider audience.

Furry Webcomics typically have the characters acknowledge that they are animals in some way — i.e. the story would be different if the characters were just drawn as humans. Other times the characters are animals simply for aesthetic reasons. It's extremely likely that the creator of the work will be part of the furry fandom, though this is by no means a prerequisite.

A sub trope of Furry Comic. Generally overlaps with World of Funny Animals.