An accompanist for the glee club at rehearsals. It took him 4 seasons to speak. Played by Glee's actual musical director, Brad Ellis. 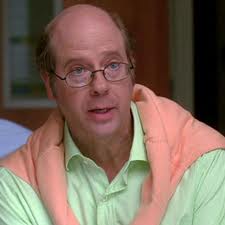 No, William, I am not allowed within fifty feet of children.

The former teacher in charge of Glee Club, he was fired when Rachel pointed out his inappropriate behavior with male students. He then teamed up with Sue to help bring New Directions down, being rehired to the school as the new head of the art department. Played by Stephen Tobolowsky. 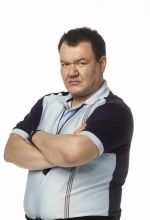 The school's football coach who was engaged to Emma. His friendship with Will is strained by Emma's affections. Has shown himself to be a nice guy despite the way the plot is against him. He seems to honestly and deeply care for Emma and her wishes, despite them being more than a bit insane. Played by Patrick Gallagher. Only lasted one season.

The coach for the Jane Adams Academy Glee Club, and the competition for New Directions' first sectionals competition. Cares deeply for her girls and only wants to see them succeed. Stole half of the New Directions' setlist, along with Dalton Rumba. Played by Eve Jeffers.

The coach of the Haverbrook School for the Deaf glee club, and the competition for New Directions' first sectionals competition. He himself is deaf in one ear from scarlet fever. Stole half of the New Directions' setlist, along with Grace Hitchens. Played by Michael Hitchcock. 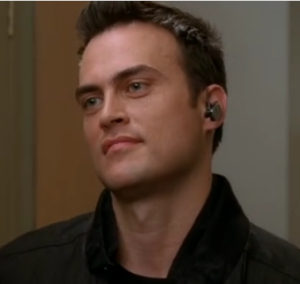 This hairline is 85% my own and my sperm count is off the charts. 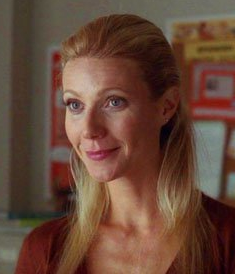 These kids feel special; they have a voice, and if we don't listen to it, they just tune us out.

A perky substitute teacher who connects to the kids by being modern and mellow. She took over the Glee Club while Will was sick, and was even given the job after Sue fired him. However, she isn't the best at dealing with the kids' serious issues. Portrayed by Gwyneth Paltrow.

A former Olympian who now works as McKinley's synchronized swimming coach, though recently she's begun vying for Sue's cheerleading position. She is brought back after "Shooting Star" after Sue is fired. Played by NeNe Leakes.

The night class Spanish teacher at McKinley, who helps New Directions (and Will) to learn some Spanish. Former teeth model and ridiculously attractive. Becomes the official Spanish teacher after Will resigns in season 3. Played by Ricky Martin.

Artie's friends who play back-up for New Directions, though not official members. However, two members temporarily join in "Hold On To Sixteen" in order to fill the membership requirements. There are several members who can all play an instrument or two. The most recognizable members are the Bassist, played by Scott Henson, and the drummer, played by John Lock. 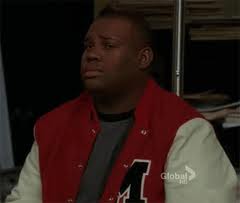 I ain't singing no show tunes. That is the music of my oppressors.

A meathead football jock who, with Karofsky, took over as the school's chief bully once Puck stopped harassing the other members of New Directions. Played by James Earl III. 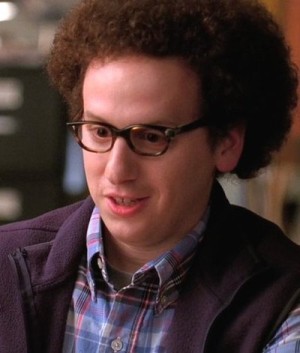 Technology has allowed us to be brutally cruel without suffering any consequences. In the past, if I wanted to tell someone they sucked, I’d have to say it to their face.

The School Newspaper News Hound, with a blog. Played by Josh Sussman. 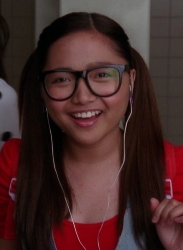 I'm such a better singer than everyone else so I know how it feels. I'm all alone at the top. Also, I'm really short, so even when I'm in a group of people I feel like I'm wandering alone in a forest.

A Filipina exchange-student with a voice to match Rachel's. Rachel doesn't take it too well, though, and she ends up transferring to Vocal Adrenaline instead. Introduced in Season 2. Played by Jake Zyrus note Prior to his coming out as trans in 2017, Zyrus went by the name Charice Pempengco.

A stoner kid who wanders around the halls. Played by Ryan Heinke. 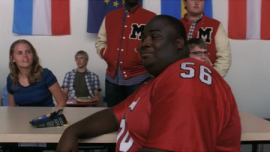 Mercedes' new boyfriend in season 3 after Sam moves away, and also a linebacker for the football team. Unlike most of the other jocks, he is supportive of New Directions, or at least Mercedes.

"I've been acting since I was a fetus. Literally. An ultrasound of me was featured on Murder, She Wrote." 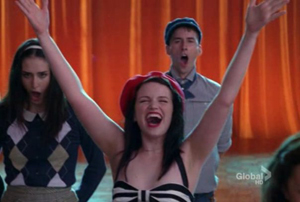 A New York Academy Of Dramatic Arts hopeful who seems to be more than a match for Rachel. Portrayed by Lindsay Pearce, one of the runner-ups from The Glee Project.

A Japanese-American freshman who acts as Tina's personal assistant starting in season four. She is very jittery and usually messes up her tasks in some way. Portayed by Pamela Chan.

More famously known as the Neckbrace Cheerio, after the neck brace she is always seen wearing. Appears in several background shots in season four, and in season 5 she is named and seemingly becomes one of Bree's minions. Portrayed by Chelsea.

The new head bitch of McKinley in season five. Absolutely ruthless when it comes to destroying the glee club. Portrayed by Erinn Westbrook.

Parents and Other Family Members 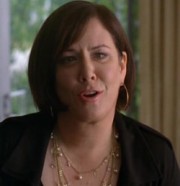 We don't need any more memories or ghosts. We need a family. A home.

Finn's mother, who raised her son alone after her husband's death. She agrees to take in Quinn early in the first season when it was believed that Finn was the father of Quinn's baby. Later, Kurt sets her up with his own father in a ploy to be able to live with Finn. The two of them tie the knot in "Furt." Played by Romy Rosemont. 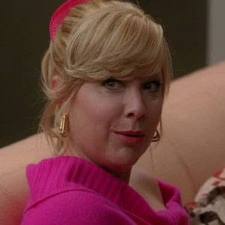 You worry too much, Terri. Mom smoked and drank a bottle of Reunite on ice every night when she was pregnant with us and we're TOTALLY normal!

Terri's manipulative older sister and the one that come up with the idea of adopting a baby for Terri. Played by Jennifer Aspen. 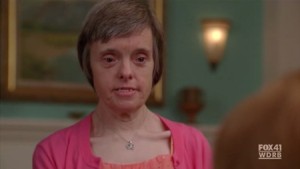 Sue's older sister, who happens to have Down's Syndrome. Played by Robin Trocki. 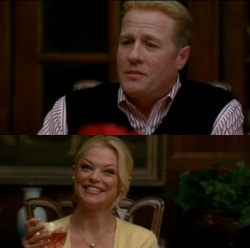 Quinn's wealthy parents, who didn't take the news of her pregnancy very well. Played by Gregg Henry and Charlotte Ross. 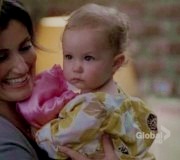 Quinn and Puck's daughter, conceived during a one-night stand pre-season one. Quinn gives birth to her in "Journey," where she is then adopted by Shelby. 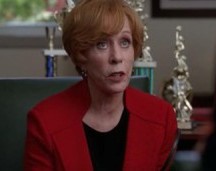 Sue's Ex-Nazi-hunter of a mother. After finally catching the last one, she returns to Lima to be part of her duaghters' lives. Sue rebuffs her when she forces herself in after being absent for so many years. Portrayed by Carol Burnett. 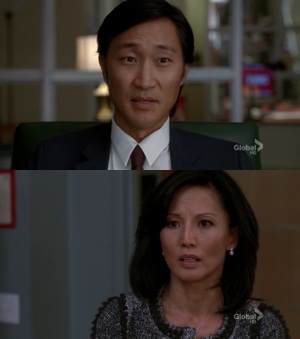 The parents of Mike Chang, Jr. Played by Keong Sim and Tamlyn Tomita. 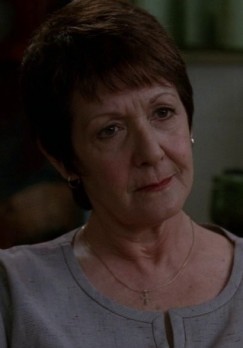 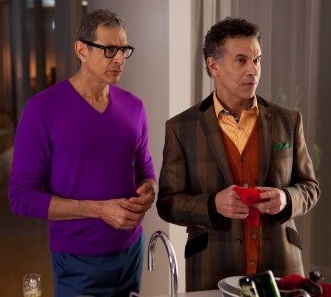 Rachel's fathers, who paid Shelby to be their surrogate. Their love for theater and performing rubbed off on their daughter in a big way. Played by Jeff Goldblum and Brian Stokes Mitchell.

Lord Tubbington
Brittany's cat, who has a strange and wild life off-camera. Played by Aragorn. 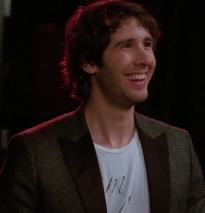 Crowds of screaming teenagers don't do it for Josh Groban... No... Josh Groban likes a blousy alcoholic. 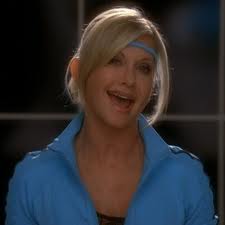 Brunettes have no place in show business.

Olivia Newton-John is offended that the brunette Josh Groban has his own TV Tropes entry, and she does not. 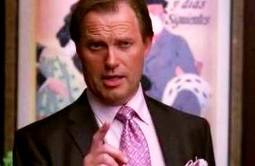 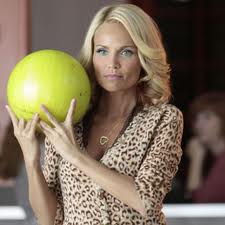 I haven't had a drink in forty-five minutes!

The star of the McKinley glee club in Will's school days, now a washed-up drunk. Played by Kristin Chenoweth. 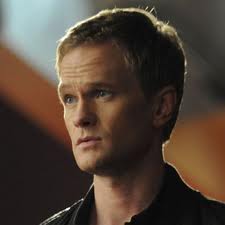 His dreams didn't come true, and neither. Will. Yours.

A former star of the McKinley High glee club and a rival of Will Schuester and now a bitter and jaded member of the school board. He tries to take down the arts program and with it, Glee Club. Played by Neil Patrick Harris.

Columbus! You're from Lima - I'm from Columbus.

The recently-appointed editor of Vogue.com, who gives Kurt an internship because she's impressed by his online resume and big dreams, and considers him a kindred spirit due to their shared Ohio origins and love of fashion. Played by Sarah Jessica Parker. 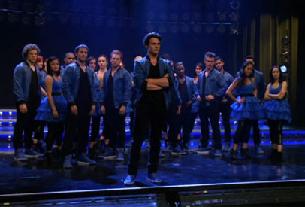 Hailing from Carmel High, they fill the spot of New Directions' rival glee club during the first season and end of the second season. As such, they seem very good, thanks in no small part to the training it seems they undergo (in addition, Tina says they dope their dancers).

New Directions' other competition for sectionals in season one. All of the members are deaf, and sing mostly in ASL. Coached by Dalton Rumba. Were disbanded after Haverbrook lost funding for its arts programs. 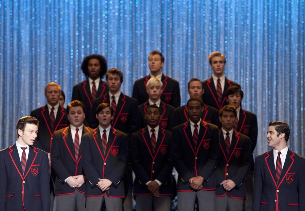 This is a kangaroo court!

An A Cappella glee club from an all-boys prep school, the Dalton Warblers provide New Directions' main competition during the second season. They're run by a student council rather than a teacher; they later take on Kurt when he changes schools to get away from Karofsky. Like Vocal Adrenaline, their lead singers rotate every year: in season 2 Blaine sang lead until he transferred, making way for Sebastian in season 3, and in season 4 Hunter Clarington took over.

Another glee club in WMHS, founded by the Mottas after New Directions turned Sugar down. They're trained by Shelby Corcoran, who quit her New York job to teach them. The club consisted of Sugar, Mercedes, Santana, Brittany and a bunch of nameless cheerleaders. The club disbanded after placing 2nd at Sectionals, but went on to perform as part of New Directions at Regionals and Nationals. In Nationals, the Troubletones adopted Quinn and Tina into their ranks.
Aural Intensity

A Glee club from West Hill High School that has faced New Directions twice at Regionals. The second time, they get coached by Sue.
The Golden Goblets

A Glee club from Our Lady of Perpetual Sorrow that faces New Directions at Regionals in Season 3.