Anybody who has a major effect on the plot, but isn't in the Glee Club (which isn't to say they get left out of the musical numbers!) 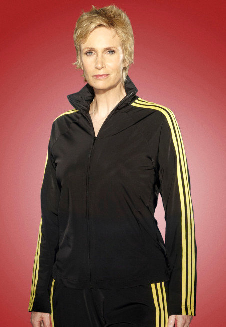 You think this is hard? Try being waterboarded... That's hard!
Portrayed by: Jane Lynch

The coach of the the school's championship cheerleading squad (the Cheerios), and in Seasons 5 and 6 principal. She continually attempts to bring down New Directions, but has a soft side due to her disabled family members, sister Jean and daughter Robin. As of the finale, she is the Vice President of the United States. 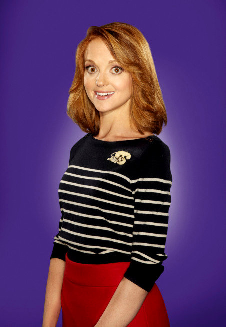 Well you can't blame her Will; if we were to rate crush worthy teachers in this school you'd be number one with a bullet.
Portrayed by: Jayma Mays

The school's obsessive-compuslive germophobic guidance counselor. Is in love with Will but got engaged to the football coach, Ken, because he was still married to Terri at the time. They began going out after he left her.

At the end of season one, she begins dating her dentist Carl, who actually begins to help her with her OCD. Eventually, they get married, until her continued crush on Will leads to them getting an annulment.. She is now married to Will Schuester. 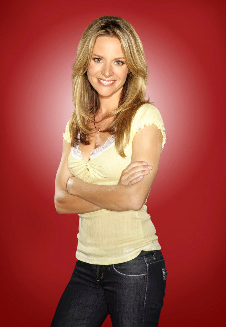 Look, Will, I know that I made your life... challenging sometimes, but... it was only because I loved you so much.
Portrayed by: Jessalyn Gilsig

Will's bratty ex-wife. She suffers a hysterical pregnancy but lies to Will and continues to pretend it's real. 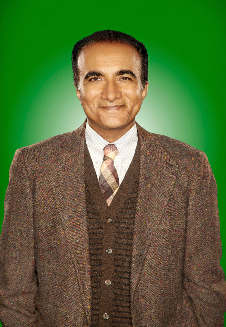 My hands are tied, Schue!
Portrayed by: Iqbal Theba

The principal of William McKinley High. Known to be quite the cheapskate. 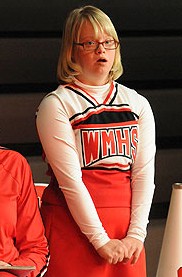 Got it, coach!
Portrayed by: Lauren Potter

A Handicapable Cheerio with Down's Syndrome, who showed up in "Wheels" and has never been too far away since. In Season 3 she becomes co-captain of the Cheerios (with Santana). 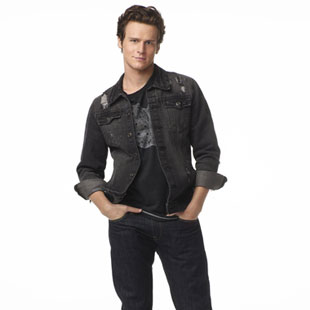 I like to give impromptu concerts for the homeless - it's so important to give back.
Portrayed by: Jonathan Groff

Member of Vocal Adrenaline, the Glee Club's biggest competition going in to Regionals. Was in a relationship with Rachel in the back nine of Season 1. It ends in "Funk", when Jesse goes back to Carmel High, and he and the rest of Vocal Adrenaline egg Rachel, putting him back on the "heel" side of the "heel"/"face" divide.

He returns for the final three episodes of season two in order to make amends with Rachel after he was kicked out of UCLA for only going to his theater classes. Mr. Schuester later hires him as a consultant for New Directions, to the dismay of everyone save Rachel.

By Season 3 he has become the coach for Vocal Adrenaline (again) and by the Grand Finale, has married Rachel. 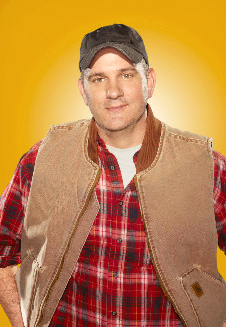 He is my son. Out in the world, you do what you want; not under my roof.
Portrayed by: Mike O'Malley

Kurt's dad, a flannel-wearing auto mechanic (who owns his own business) and single father who looks like the last sort of parent who'd accept having a gay son, let alone one as camp as Kurt. In his case, appearances are definitely deceiving. 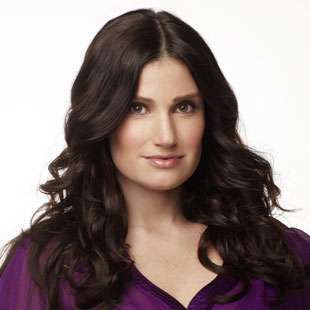 I want you to look so talented, it's hurting you; I want a look so optimistic it could cure cancer.
Portrayed by: Idina Menzel 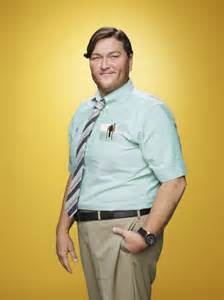 Do not get up in The Panther's business, lady. You're all coffee and no omelette.
Portrayed by: Dot Marie Jones

Ken Tanaka's intimidating but gentle replacement as football coach. Although he butts heads with Will and Sue in his first appearance, soon he becomes a staunch ally to the glee club and eventually even Sue warms up to him. Came out as trans (female to male, birth name of Shannon) in the final season. 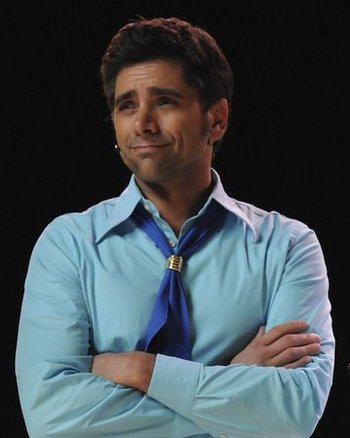 Emma's sexy dentist boyfriend and Romantic False Lead for Will. He marries her in "Special Education" but as of "Born This Way" they are divorced]. 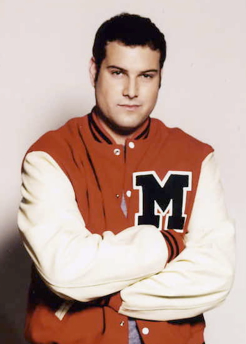 This is high school. People's memories for good stuff lasts about as long as their Facebook Status.
Portrayed by: Max Adler

A meathead Hockey jock ("puckhead") who, with Azimio, took over as the school's chief bully once Puck stopped harassing the other members of New Directions. In "Never Been Kissed", he reveals himself as an Armored Closet Gay by forcefully kissing Kurt after Kurt confronts him over his bullying, later threatening to kill him if he told anybody. The threat itself came to light, and he got (temporarily) expelled for it. 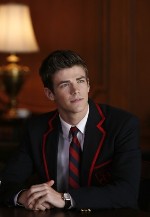 Let's get a few things straight. Blaine is too good for you, New Directions is a joke, and one of us has a hard-luck case of the gay face, and it ain't me.
Portrayed by: Grant Gustin

The new captain of the Dalton Academy Warblers, who is openly gay, freely promiscuous, and sets his sights on Blaine the moment the two meet. 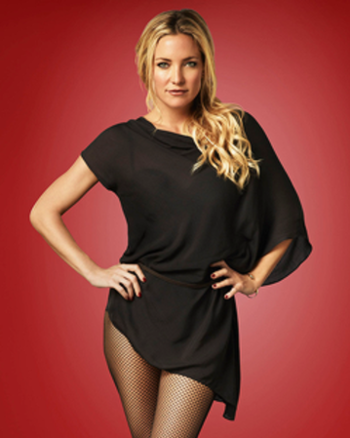 We are the best of the best.
Portrayed by: Kate Hudson

Rachel's dance instructor at NYADA, and a huge bitch, though she really does care about her students. Has a bit of a drinking problem. 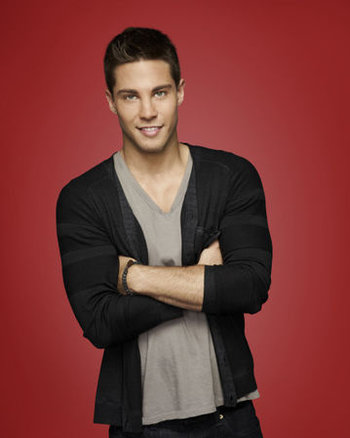 In case you were wondering, which you were, I'm straight.
Portrayed by: Dean Geyer

One of Rachel's classmates at NYADA, as well as a potential love interest. 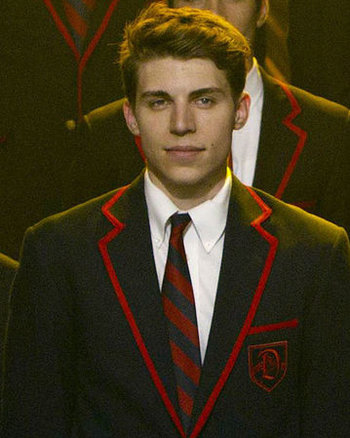 I'm not even remotely bi-curious.
Portrayed by: Nolan Gerard Funk

The new Captain of the Dalton Academy Warblers in Season 4, who is determined to dethrone the New Directions as National Champions. 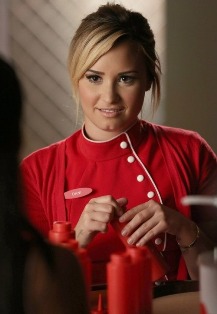 I think you need a 100% Sapphic goddess.
Portrayed by: Demi Lovato

Santana's girlfriend, an aspiring artist who works alongside her, Rachel and Kurt at the Spotlight Diner. 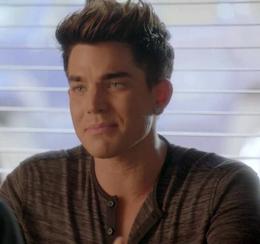 It's an homage. To Ziggy Stardust and the Spiders from Mars.
Portrayed by: Adam Lambert

A boy who goes to NYU and joins Kurt's band. A theatre kid who is very flamboyant and outgoing, and not afraid to hide his talent. "Starchild" is his stage name, but he goes by Elliot in casual situations.