Reality-Breaking Paradox
aka: Divide By Zero 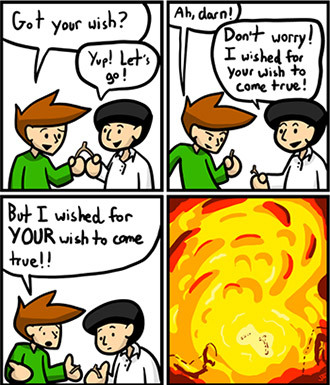 , used with permission.
"Think about it really hard. If a Reality Breaking Paradox were to exist, then it would destroy reality. Which would cause it not to exist, and therefore for reality to exist. Or even that if reality were to cease existing, it would cause a paradox in that there has to be a reality in which reality existed (for something to happen to undo everything), and because reality encompasses everything that has been or could ever be, the reality in which reality existed has to be itself. Basically, you are presently in reality, which means that nothing will have or can ever take away this reality. Stop thinking now and take some tylenol."
— Dirk Gently's Holistic Detective Agency, arguing that because the Universe presently exists, there can't ever be an event which causes it not to.
Advertisement:

The characters did something so incredibly wrong that reality itself couldn't handle it. It could be the result of a Time Paradox, the result of a Yin-Yang Clash, an unstoppable force meeting an immovable object, the summoning of an Omnipotent Eldritch Abomination, the risk behind the Forbidden Chekhov's Gun, making a logical error in Rewriting Reality, or even defying the almighty Status Quo. Whatever the case, it's The End of the World as We Know It unless something gets fixed quickly.

See also Class Z Apocalypse, Logic Bomb, Temporal Suicide, and Time Crash, which can overlap with this. Often the Logical Extreme of an Epic Fail. Not to be confused with The Singularity. Contrast Beyond the Impossible, whic is breaking internal logic. See also Breaking the Fourth Wall, which is when a character violates fictional reality, and Upsetting the Balance, which is when a character destroys the universe by breaking some balance that isn't necessarily tied to reality.

If this happens to the video game you are playing, it's a Game-Breaking Bug. Can follow a Cosmic Flaw.