The following is a list of all the characters in The Twelve Kingdoms. Given that there are twelve kingdoms it's not a shock that over time the cast grows quite large.

Also included below is a short rundown/glossary of the various fantastical creatures found throughout the world that have tropes associated with them but are not named, as well as tropes that apply to specific groups of people.

Youma
Youma is a catch-all term for the fantastical and dangerous beasts that inhabit the realms of the Twelve Kingdoms. One type of beast is called a Nyokai, and they are the first youma to serve the kirin. As the kirin ages, they can collect additional youma. A youma in service to a kirin is called a shirei. The shirei always serve their kirin until the immortal creature dies, at which point they are allowed to eat the kirin.
Sen-nin
The Sen-nin are people who fulfill governmental posts. In order to work for their kingdoms, they are granted special abilities that allow them to handle any difficulties that may arise in a bureaucratic environment. Certain random gods also seem to have been granted these powers without belonging to a kingdom.
Rulers
Kirin

The Court of Kei 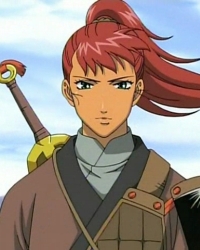 Youko is just your average shy Japanese high-school girl. That abruptly changes when a mysterious golden-haired man drops into her classroom and pledges his loyalty to her as his master, dragging her into the alternate realm of the Twelve Kingdoms.

She is actually the displaced ruler of the Kingdom of Kei, and after reclaiming her throne from a pretender, she seeks to renew it to its former prosperity and glory. 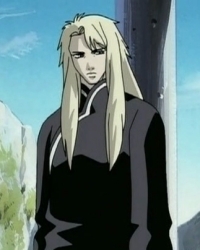 The kirin of Kei. He traveled to Japan in his quest to find Kei's new ruler, and found what he was seeking in Youko. He is stern and rather awkward socially, but cares for others deeply, like all kirin.

When Youko is seated on the throne of Kei, he serves as her confidant and tutor. 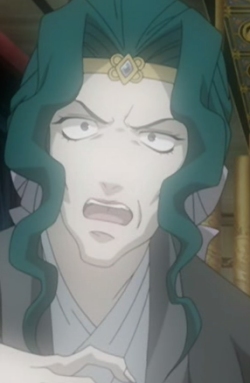 The timid daughter of a merchant family, and former Queen of Kei. After the stresses of rule drove her to slaughter half Kei's population and bring her beloved Keiki to the brink of death, she relinquishes the crown and is struck down by the Heavens. 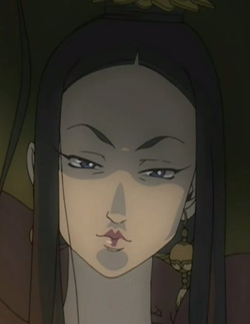 Jokaku's younger sister. She was terribly jealous of her sister having been chosen as the Queen of Kei, believing herself far more capable. This led to her striking a deal with the King of Kou in his schemes, and being installed as a pretender empress.

When Youko allies with the Kingdom of En to retake her rightful throne, Joei is proven a false queen and is killed.

A mysterious monkey-like creature that follows Youko around, taunting her with the hopelessness of her plight.

He is the spirit of Youko's sword, set loose when she lost the sheath in the chaos of her touchdown in the Twelve Kingdoms.

A high-ranked retainer in the court. Actually, a total asshole.

The Kingdom of Kei

The wise elder of the town Youko has chosen to study and train in. He is actually the legendary sage Roushou.

Enho's housekeeper. A young woman determined to provide a good life for her younger brother in the recovering Kingdom of Kei. She is killed by assassins searching for Youko.

The longtime Governor of Wa province, he takes a back seat while his underlings turn the province into a fascistic hellhole. 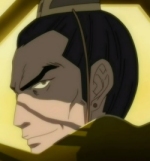 The magistrate of Shingetsu village and immediate subordinate to Gahou. He gets his jollies from mercilessly abusing the people he's supposed to be protecting.

The much-maligned governor of Baku province. He is openly disliked by nearly everyone else in the royal court. May be a traitor after Youko's head. He isn't; in fact it's quite the opposite.

A roguish Kei military leader who is supportive of the resistance effort. He is fiercely loyal to Governor Koukan, who is one of the only non-anti-hanjyuu officials in Kei, and who gave him a chance as his lead officer.

A large, boisterous man who is a member of the resistance and a protective older brother to Sekki.

Much more sensible and thoughtful than his older brother Koshou, he is the brains of the resistance.

The Kingdom of Kou 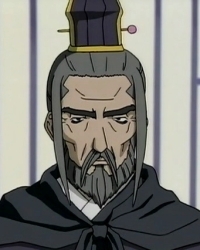 The ruler of Kou, and the one behind the Kei usurpation plot. His insecurity regarding his own performance as king led him to grow envious of the prosperous, taika-led kingdom of En, and caused him to lash out at Youko.

In the anime, he dies shortly after accidentally killing Kourin in a rage. The novels have him die after Kourin dies of shitsudou. 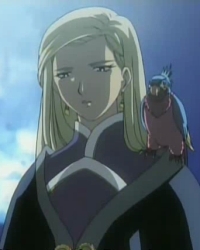 The kirin of Kou. She can only helplessly carry out the King of Kou's orders, no matter how evil. In the anime, she dies by protecting Youko from her king's sword; preventing him from making such a horrible mistake. In the novels, she dies from shitsudou. 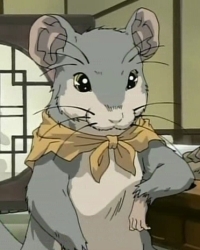 A kind, intelligent hanjyuu from Kou. After nursing the half-dead Youko back to health, he accompanies her to En, and eventually manages to get her an audience with Shouryuu and Enki one he pieces out that she was chosen by Keiki.

After Youko is installed as queen, they maintain friendly correspondence while Rakushun attends En's top university.

The Kingdom of En 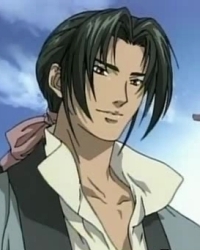 The cunning, charming King of En. He is a taika, born in the age of Feudal Japan as the son of a samurai lord. After being spirited away from a losing battle by Enki, he takes the throne of En, and has ruled it ever since. 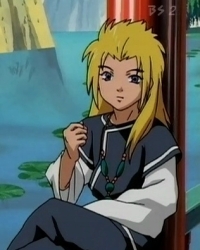 The kirin of En. Similar to his king Shouryuu, he was born a taika in Feudal Japan – however, he was born to a desperately poor peasant family, and saw firsthand what the horrors of war can do to the common people. He came to distrust government figures as the ones who start wars, but eventually warmed up to Shouryuu once he proved his devotion to the welfare of En's people. 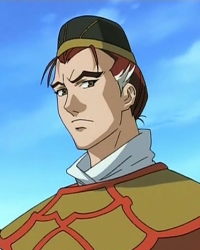 The beloved, accomplished governor of En's most prosperous province. He has little faith in the newly-installed Shouryuu's competence as king, and is concerned for En's future. It's all mostly thanks his massive ego and superiority complex deluding himself into thinking he'd be a better king. After years of manipulation and abuse of everyone in his surroundings (and specially of Kouya and of his own father), he is killed while cheating in a duel against Shouryuu. 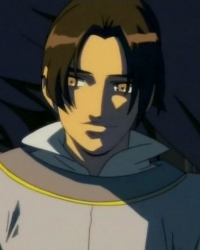 A cunning, manipulative young man in the service of Atsuyu, who saved his life when he was young. After years of psychological abuse from his master, Kouya finally comes to terms with his master's evil ways, and self-exiles himself to Mount Hou to wait for Shouryuu to make a kingdom where both he and his youma friend are welcome. During his stay there, he has become the God of Travelers, Genrou Shinkun.

A calm, intelligent civil servant, and very loyal to Shouryuu. She is imprisoned as part of Atsuyu's plans, and sacrifices her own life to free Enki.

The Kingdom of Tai 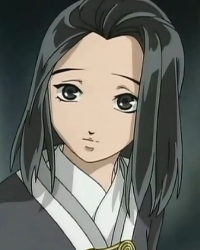 The kirin of Tai. His dark hair marks him as an incredibly rare black kirin; a herald of prosperity. He is a taika, and was spirited away from his abusive family by the efforts of Enki and the Mount Hou nyosen. He struggles to come to terms with his power and identity as a kirin in an unfamiliar world.

After being attacked by a treacherous general during a usurpation plot, he was flung back to Japan with a damaged kirin horn and amnesia of his time in the Kingdoms. After years of further confusion and abuse, he was finally located by an international search squad organized by Youko and brought back to the kingdoms. Whether or not he will find the missing Gyousou and save Tai is, unfortunately, an ongoing cliffhanger. 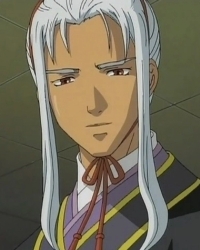 A highly-respected general in Tai, and the man Taiki chooses to be its ruler. He is a skilled and shrewd leader, though a bit impatient, and is confident in his ability to restore Tai to prosperity.

His hastiness to purge the government of long-standing corruption makes him a lot of enemies, which leads to an usurpation plot led by a rival general. Though he is still alive, his whereabouts are currently unknown.

Taiki's nyokai and surrogate mother. She is utterly devoted to his care and protection.

A changeling demon known as a toutetsu; horribly powerful by any standards, enough to make even a Physical God think twice about tangling with him. Taiki brings him under his control as his shirei when he threatens Gyousou and Risai in his lair.

An up-and-coming military officer in Tai. She is determined to see Tai restored to its former glory, and is loyal to Gyousou and Taiki.

The Kingdom of Hou 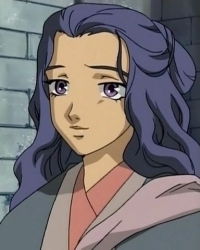 As the daughter of its former ruler, she is the deposed princess of the Kingdom of Hou. Spoiled, haughty, and incredibly out of touch with the reality outside the palace, Shoukei must adjust to her new life as a peasant and come to terms with her father's tyrannical reign.

The former King of Hou. His Knight Templar behavior led him to enact incredibly strict laws, which eventually led to his deposition.

The wife of the former King of Hou. Self-centered and haughty, her actions are among those that bring Sonken's fall.

The former kirin of Hou. She is killed during the deposition of the king, as punishment for having chosen him in the first place.

The leader of the coup against the former king of Hou, and formerly one of the most high ranked government officers there. He genuinely wishes for what is best for the kingdom, and is not proud of the blood on his hands.

The Kingdom of Kyou 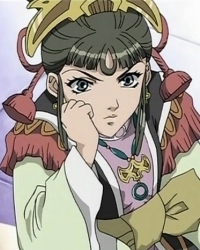 The ruler of Kyou. Physically just barely a teenager, she was the youngest chosen ruler when she came to the throne. Despite her youthful looks, she is a shrewd ruler, and has led Kyou into great prosperity. 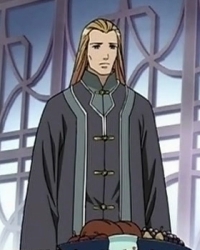 The kirin of Kyou. His quiet, thoughtful demeanor is in great contrast to his Empress' bombastic outbursts.

The Kingdom of Sai 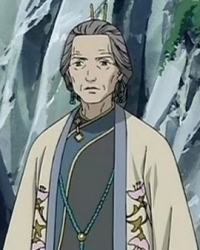 The wise and kind ruler of Sai. Despite her elderly look, she's actually one of the youngest rulers in the 12K world (of the currently-sitting royals, only Youko is younger) 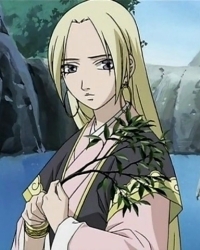 The kirin of Sai. She is very calm, cultured, and dainty, even for someone of her kind.

A vain, tyrannical woman who takes Suzu under her wing to serve as her maid.

The Kingdom of Han

The King of Han, who has ruled for three hundred yearsnote  The anime gives us a different time-span, saying that he has been on the throne for 120 years (which, thanks to a typo, the English subtitles and dub accidentally translated as TWELVE HUNDRED years) and brought Han great prosperity. He is somewhat difficult to get along with, and butts heads particularly venomously with Shoryuu.

The kirin of Han, (currently) nicknamed Risetsu by her king. She is a spunky and loyal partner-in-crime to her beloved king. 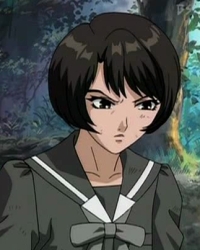 An anime-only character (sort of, see below) who is accidentally dragged into the Kingdoms when Youko is first swept over. She is convinced that she alone was meant to be brought over, and is incredibly jealous of Youko. 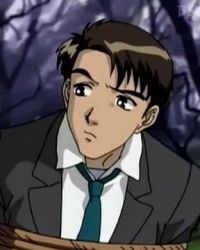 An anime-only character who is accidentally dragged into the Kingdoms when his old friend Youko is first swept over. He is terribly out-of-place in the unfamiliar world, and does not adapt as well as Youko and Yuka. After being separated from them, he is gradually driven insane from being isolated from all he's ever known. 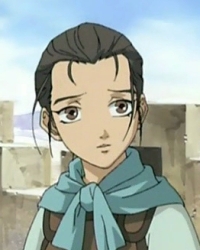 A kaikyaku from Meiji-era Japan, she was swept over in a shoku while she was leaving home to work for a local nobleman that she was sold to as a maid. Separated from all she's ever known, Suzu seeks her place in this strange new world.