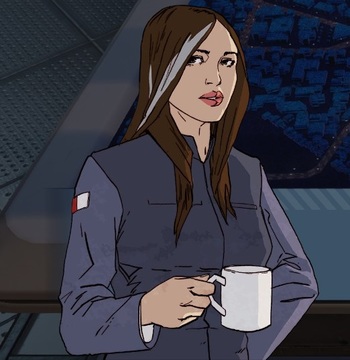 A hero of the resistance and veteran officer, Jane Kelly rose from humble beginnings as a front-line soldier to a major leader within XCOM. Following the end of the war, she became an advocate for the rehabilitation and integration of alien POWs in order to diversify XCOM's forces in the event of a counterattack by the Elders, and was appointed as the director of XCOM's newly-formed Reclamation Agency.

For information about her appearance in XCOM 2 and its DLCs, see this page.
Advertisement:
Whisper 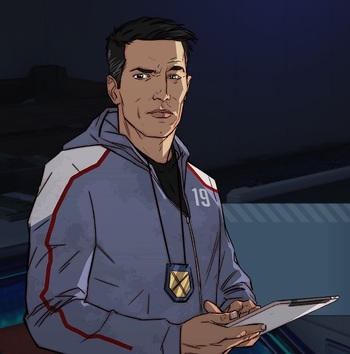 A local XCOM operative acting as the mission control for Chimera Squad. 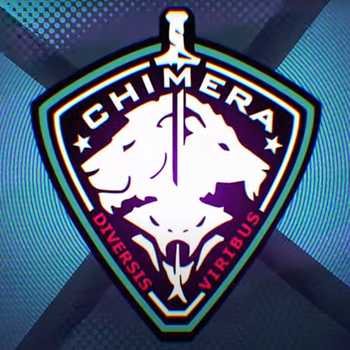 An experiment in joint human-alien operations, Chimera Squad was established by Jane Kelly as an elite rapid-response unit within the Reclamation Agency, tasked with aiding local-level police and peacekeeping forces against domestic threats such as terrorists and crime syndicates. 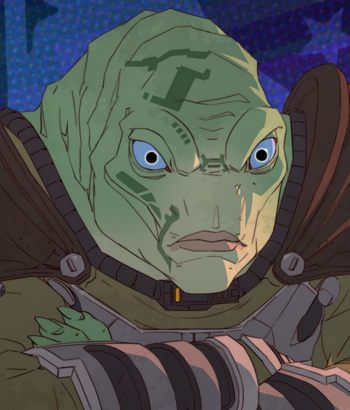 "Crashing the party!"
Class: Breaker
Race: Muton
Age: 46
Origin: Shipborne
Voiced by: Chris Fries
"Surrender, or don't, I'm fine with either. Are you?"

A muton soldier and a veteran of the first war. He spent most of his time doing security, and after ADVENT's surrender gained recognition for fighting Chryssalids and protecting humans.
Blueblood 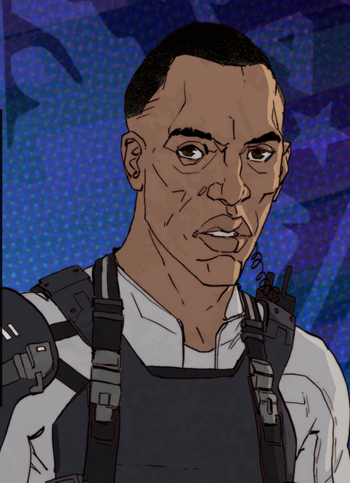 "Boom!"
Class: Gunslinger
Race: Human
Age: 34
Origin: Eastern US
Voiced by: Todd Williams
"Do it the smart way. The hard way gets you killed."

From the United States, Blueblood is the son of a teacher and a third-generation police officer. During the occupation, he and his father moved to City 31, where he worked for his father's private detective agency, helping the underserved sections of the city, and secretly aided the Resistance from within the city before ADVENT was ousted by XCOM. After the war, he was one of the first to join 31PD, before eventually transferring to the Reclamation Agency with the blessing of the previous 31PD commissioner.
Advertisement:
Cherub 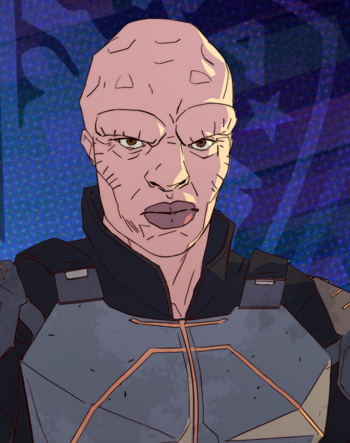 While trained as an ADVENT soldier, Cherub had not yet undergone indoctrination when he was found by XCOM and captured. He was enlisted in XCOM once it became clear that he had no ADVENT sympathies.
Claymore 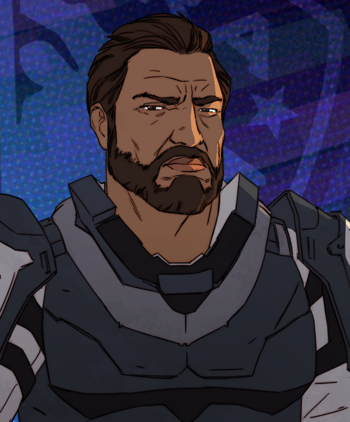 "Shrapnel out!"
Class: Demo Expert
Race: Human
Age: 32
Origin: India
Voiced by: Kamal Khan
"There is never a red wire. I'm lucky if there are even wires."

A survivor of the original invasion, he was forced into a nomadic lifestyle with his parents. He spent the war making explosive devices for the resistance.
Godmother 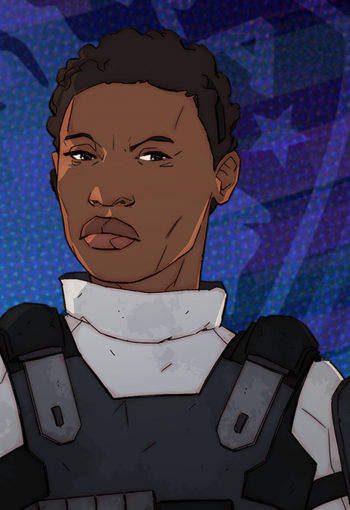 "Chimera squad trains for the unpredictable."
Class: Ranger
Race: Human
Age: 48
Origin: France
Voiced by: Mela Lee
"Of course my plan is 'by the book'. I wrote half the book."

A veteran, no-nonsense soldier, she is known as a bit of a perfectionist. She was an instructor before the alien invasion, and ended up leading part of the Resistance in the long years of the rule of ADVENT.
Patchwork 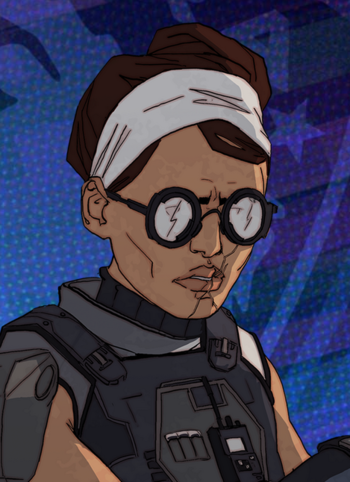 A survivor of a brutal attack during the invasion, she was raised in an ADVENT orphanage and paraded by ADVENT as a show of their kindness after they gifted her with prosthetics. She rebelled and joined XCOM, during which she was transferred from the backend support team to field operations after losses sustained during an Avenger Defense battle. She was transferred to Chimera Squad on Lily Shen's recommendation after ADVENT was defeated.
Shelter 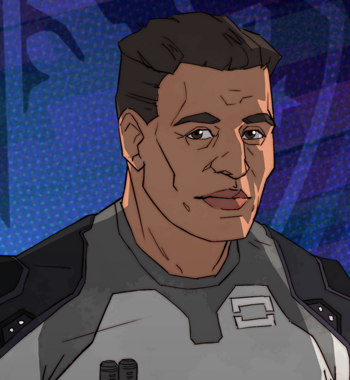 "Postponing the target"
Class: Psion
Race: Human
Age: 36
Origin: Chile
Voiced by: Mark Mercado
"I can't be your weapon. But I will be your shield."

A former psionic slave-soldier who managed to escape ADVENT. While he dislikes his psychic powers and eagerly awaits the day he can stop using them, he is willing to help the post-ADVENT provisional government keep the peace.
Advertisement:
Terminal 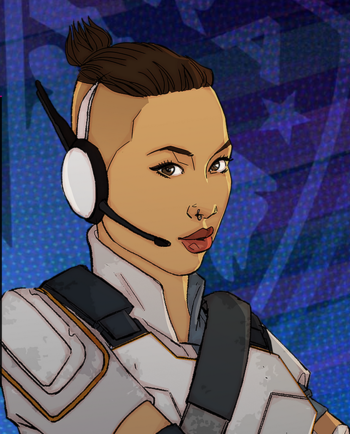 "Let's get your insides back inside."
Class: Medic
Race: Human
Age: 29
Origin: China
Voiced by: Jenny Yokobori
"If you die, everything in your locker is mine. Especially the embarrassing stuff."

An orphan adopted by a doctor, she was rescued by a resistance group after her town was wiped out a second time.
Torque 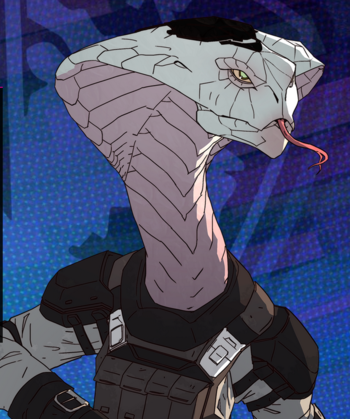 "Putting the squeeze on."
Class: Inquisitor
Race: Viper
Age: 20
Origin: Siberia
Voiced by: Erica Lindbeck
"Quotes? Sure, Whisper. Can you quote this gesture? How about two?"

An ADVENT soldier who specialized in hunting down resistance groups. Unlike most of the aliens on Chimera Squad, she never fought against ADVENT, and simply switched sides after she was captured, eventually developing rapport with Jane Kelly. She was transferred from training OPFOR to Chimera Squad when her request was approved by Director Kelly. As she was hatched on Earth in the New Arctic region in 2020, she considers herself a native of Earth.
Verge 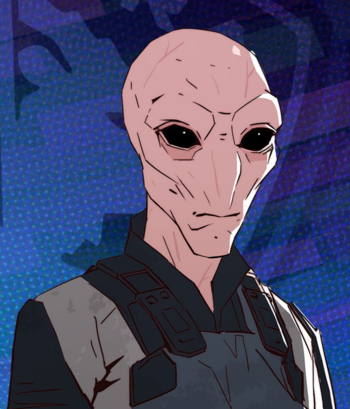 "My mind over yours"
Class: Envoy
Race: Sectoid
Age: 40 (Estimated)
Origin: Shipborne
Voiced by: Matthew Yang King
"I have my mind's eye on you."

An offensive psion who disables enemies either by stunning them, turning them against one another, or lifting them out of cover. He was originally an ADVENT puppetmaster used to subvert human governments, but he began empathizing with the people he was fighting. He turned to the Resistance's side and began feeding them vital information.
Zephyr 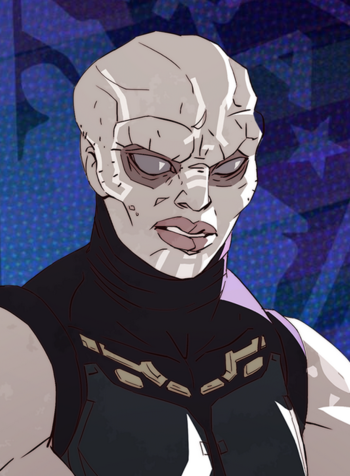 Originally just another ADVENT soldier, then a Skirmisher fighting beside XCOM. She fights exclusively in melee.
Androids

Androids that resemble scaled-down SPARKs from XCOM 2 that can be built to replace downed members of the team. Where most of the Agents dislike these robots, Patchwork is fond of them and treats them as her robot buddies.

The hybrid mayor of City 31. She is the one who invited XCOM's Chimera Squad in town. She was kidnapped and murdered the day the Squad arrived, sparking chaos in the city.
Commissioner Halia Maloof 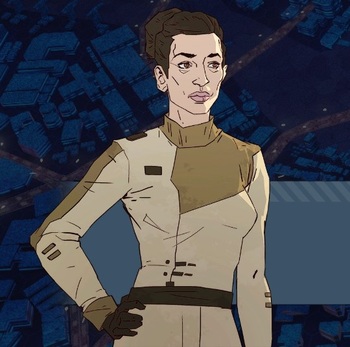 The Commissioner of the City 31 Police Department. She supported the Mayor's decision to call the squad in for assistance, and requests Chimera Squad's aid in certain missions that her officers aren't equipped to handle.
Xug 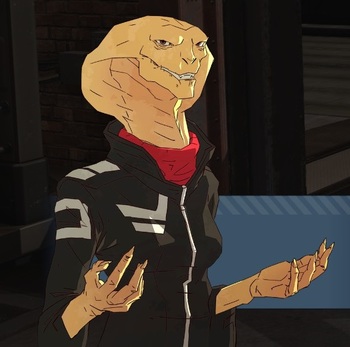 The leader of the Viper's Den, a quasi-legal bazaar for scavengers selling equipment salvaged from old battlefields. She offers Chimera Squad periodic access to her top merchandise and tip-offs about the city's various crime groups in exchange for protection for her and her associates.
Floyd Tesseract 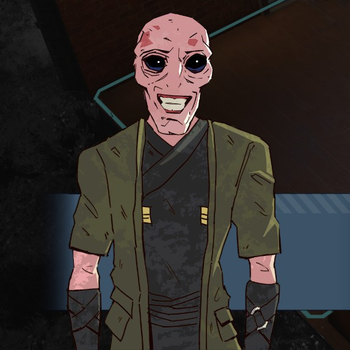 A sectoid Conspiracy Theorist who hosts the radio show You Should Have Believed, ranting about the dangers of authority and encouraging his listeners to suspect everyone, including him.
City Council 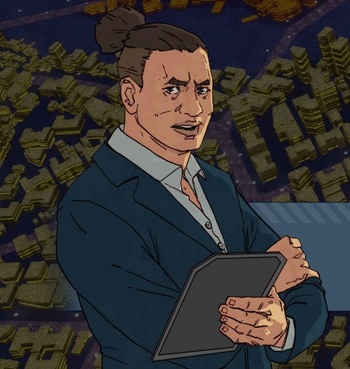 What is a City without a City Council to squabble over minutiae and hold endless meetings? City 31 is no exception.

In General
Agenda: Financial gain and expansion of operations, exodus of alien dissidents.

A Muton-led gang of alien scavengers who have access to the kinds of equipment that would've made the Mayor's assassination possible, which is also the kind of equipment Reclamation wants off the streets.
Xel and Yarvo
Grey Phoenix's leadership, made up of a muton engineer and a muton Praetorian
Praetorian
Mutons equipped with armor-generating tech and shotguns

In General
Agenda: Forced relocation of all non-psionics and aliens from City 31.

An organization of human psychics, advocating that the city should become a sanctuary for human psions. Their anti-hybrid stance and vast resources and means could make them sponsor the mayor's assassination.
Violet

The leader of the Progeny, a former ADVENT test subject for induction of psionic abilities in humans.
Sorcerer
Human psions primarily working for The Progeny. They have a wide range of psionic ability to empower allies and surprise enemies.

A cult of Hybrids promising enlightenment and exaltation to those who oppose XCOM. Their access to ADVENT technology, and their natural opposition to XCOM make them a likely candidate for having ordered the assassination of the mayor who invited XCOM into town.
Bellus Mar
Sacred Coil's leader and the foundation for thousand of ADVENT commander clones. Fanatically loyal to the elders and their vision.
Android
Androids that have been salvaged by Sacred Coil for their own purposes.
Ronin
Melee insurgents that are dangerous in the enclosed, close-quarters Chimera Squad often finds itself in.

Agenda: Staging of terror attacks using the other three factions as proxies, to provoke authoritarian policy changes in XCOM.

A former hardliner cell of XCOM's resistance turned vicious paramilitary group, disillusioned by the organization's peaceful post-war policies. It was they who masterminded the assassination of Nightingale, in the hopes of causing a crisis that would force XCOM to take military control. They frequently show up as backup for the other factions under the pretext of being mercenaries, and ultimately lead the final siege against Chimera Squad in a last-ditch attempt to derail the Reclamation Agency's progress in City 31.