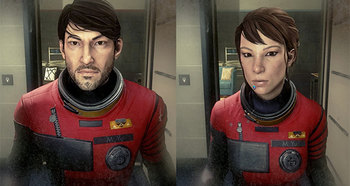 Vice President of TranStar and current test subject in the Simulation Laboratories. They are freed from the simulation after the Typhon break containment and begin spreading across Talos I.

The older brother of Morgan and President of TranStar.

An Operator created by Morgan with their memories and instructions to rescue them if they became a prisoner in the simulation lab.

Head of security for Talos I, she has had a rocky but functional relationship with the Yus.

A security officer stationed in the lobby.

One of the lead Neuromod researchers of Talos I, Igwe was long considered a joke by the scientific community for his belief in psychic abilities.

A researcher in Psychotronics who specializes in medical parasitology.

A scientist in the Hardware Labs working on the Looking Glass. Though he has "eidetic memory" listed in his profile, he seems to be suffering from severe memory problems in secret.

A scientist working in the psychotronics department of Talos I.

The counselor of Talos I, whose main task appears to be monitoring the staff for signs of disloyalty to Alex and TranStar. His actual counseling job is secondary.

Other Talos I crew

The chief systems engineer of Talos I and ex-girlfriend of Morgan.

Chief archivist of Talos I and head of Deep Storage.

An engineer who is responsible for maintenance on Talos I's escape pods. Morgan finds him and Emmanuella DeSilva trapped inside an escape pod and must help them launch it.

A cargo handler who was fired just before the Typhon outbreak. He never showed up for the shuttle back to Earth, and there's a sidequest to discover what happened to him.

A "Volunteer" who was trapped in the material extraction chamber in Psychotronics when the Typhon broke containment. Morgan has the option of either releasing him or finishing the extraction, killing him in the process.

The most basic form of Typhon — a parasite about the size of a large crab, capable of shapeshifting into innocuous objects.
Cystoids

Grenade-sized blobs that emanate out of radioactive nests. They are also released by Weavers as a defense mechanism.
Phantoms

Humanoid Typhon created from human corpses by the weavers, serving as warrior organisms within the ecology.
Poltergeists

Sometimes a Weaver will fail to create a Phantom; in less of 5% of cases, it creates a Poltergeist instead.
Weavers

When enough Mimics have been created, they group together and force one of their number to become a Weaver. Crucial to the Typhon way of life, this floating, spider-like creature creates coral and other, more sophisticated Typhon beings.
Technopaths

The tech counterpart to the Telepath, Technopaths are large flying Typhon capable of corrupting and controlling machinery aboard Talos I.
Telepaths

The organic counterpart to Technopaths, Telepaths are large flying Typhon capable of taking over human minds. Only those wearing a Psychoscope, or with pre-existing unspecified traumas, have any chance of resisting them.
Nightmares

The Typhon are busily creating something akin to an eco-system onboard Talos I. When something persistently disturbs that eco-system, they generate an auto-immune response to find and get rid of it. The Nightmare is that response. The thing disturbing them is you.

A wetworks operator for Transtar, Walther Dahl is given the task of disposing of those who are a liability to the company, a job he performs with efficency. During the final act of the game, he hijacks Talos I, and turns the many systems of the station against Morgan.

One of the "Volunteers" on Talos I, Luka Golubkin manages to escape confinement during the chaos and disguise himself as the station's chef.

A monstrous, impossibly huge Typhon who is the one behind the attack of Talos I, and the main antagonist of the game. The goal of all the Typhon on Talos I was simply to build enough Coral to "summon" it.
The Hybrid

As revealed in The Stinger, you aren't actually Morgan Yu - or at least, not the original. You are, in fact, a Typhon organism that has been implanted with their DNA and memories, then placed in a mutable simulation of Talos I post outbreak based off the actual events.

Moon Shark
A giant Typhon that swims through the soil of the moon.
Tentacle Nest
A stationary Typhon that attack with long tentacles. It appears to be a juvenile form of the same tendrils the Apex uses.