Characters appearing in "Everyday Life as a Supporting Character".

WARNING Spoilers might exist below on this page, if you have not read the fic as of yet, go and do so first before opening any the folders of this page or scrolling down!, You have been warned! Read the story first! 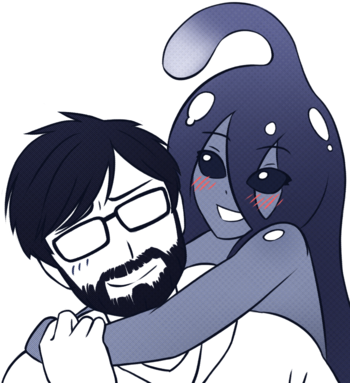 Juyo with Suu, by Phearo
A ordinary human being who have ended up in a world of limininals for unknown reasons and assigned to the Kurusu household due to technical formalities and as a pair of extra hands for the house-stay in question.
Kimihito Kurusu

The home-stay host and the owner of the Kurusu Household as he is put in charge for a number of liminal girls drawn towards him. He also ends up in charge of Juyo.

A lamia, assigned to the Kurusu Household by accident on Ms.Smith's part and accepted anyways by Kurusu and the first homestay.

A harpy brought into the Kurusu Household as part of the Cultural Exchange Program and a acknowledged accidental troublemaker in that she keeps flying away from other host families, forgetting about them by accident in the process. Currently staying with Kurusu who can keep her coming back and stay in one place unlike before. The second homestay.

Centorea Shiantus
A Centaur enlisted in the cultural exchange program and living within the Kurusu-household.
Suu
A slime girl who found its way into the Kurusu Household as a illegal immigrant due to her nature as a slime in the eyes of the CEP. Assigned to the household as Smith put the paperwork off the slime on hold. A upbeat, curious, child-like girl far purer than her canon counterpart and "adoptive daughter" of Juyo.
Meroune Lorelei

A mermaid brought into the Kurusu Houshold on Ms.Smith's insistence and the fifth homestay. A tragedy-fetishist learning the ways of the people.

Rachnera Arachnera
An Arachne brought into the Kurusu Household which, due to Juyo's involvement, occurred during quite some tense circumstances.

The overworked main operator in charge for Japan's CEP branch of the "Cultural Exchange Program" and squad leader for MON.

Juyo's first assignment, a painfully shy Portuguese Mandrake which needs to open up a little more.

Juyo's second assignment, a neglected Indian raptor harpy in need for a change of air.

Zombina's elder sister and roommate out of necessity due to her certain "medical condition".

Miia's mother and a Chthonian lamia from the Far Side.

The household of a certain bicycle cop and one of Juyo's recent assignments as a counselor.

An Echida who once was part of a black market scheme with her former homestay until she had a change of heart. Due to her unfortunate circumstances, she's currently under valuation at the Takasaka household.

Iris
Vera
A Wyvern staying with Takasaka as she's found socially too inept of fitting in with society at the time being.
Tula
A large-Breed Arachne (Tarantula) and illegal immigrant who due to religious reasons refuses to leave Japan and got assigned to the Takasaka household for the time being.
Mako

A Shark-mermaid and former member of a rouge Organization called Charybdis, who turned herself in to turn over on a new leaf. Currently staying with the Takasaka household.

A Black Slime currently staying in the Takasaka household and with a history to Enkidu and Kuroko Smith personally.