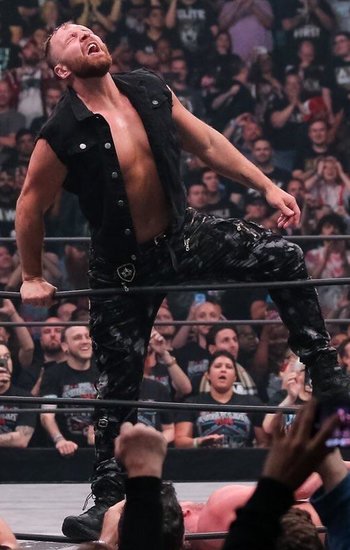 JON.
FUCKING.
MOXLEY.
"This is what you call a Paradigm Shift."
Advertisement:

He signed a developmental contract with World Wrestling Entertainment (WWE) in 2011, and was assigned to Florida Championship Wrestling (FCW), WWE's developmental promotion, with the new ring name Dean Ambrose. The next year, he debuted on WWE's main roster alongside Roman Reigns and Seth Rollins as part of the villainous stable The Shield at that year's Survivor Series. The group—Ambrose included—turned face in March 2014, only for Rollins to betray and attack them that June. Outraged by his teammate's treachery, Ambrose began a deeply personal feud with his former Shield partner. During his tenure there, he became a one-time United States Champion, with his 351-day reign being the third-longest in history and the longest within WWE (who acquired the title in 2001), a three-time Intercontinental Champion, the 2016 Money in the Bank winner, a one-time WWE Champion, and a two-time Raw Tag Team Champion (with Seth Rollins). He is the youngest Grand Slam Champion at 31 years 8 months old, edging out The Miz by one month!

Ambrose would depart WWE in April 2019 following Creative Differences, making him the most sought-after free agent in wrestling until signing a deal with All Elite Wrestling the next month. He made his AEW debut under his pre-WWE ring name Jon Moxley at the company's inaugural event Double or Nothing, laying waste to Chris Jericho and Kenny Omega. Shortly thereafter, he made his first NJPW appearance a memorable one, winning the IWGP US Championship in his first match with the promotion. Moxley's AEW contract allows him to work international and indy shows that don't conflict with AEW.