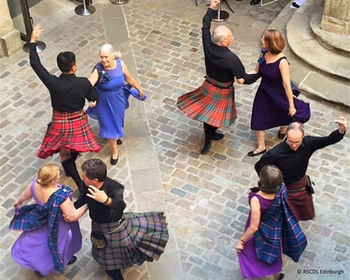 Scotland is land of many proud and slightly quirky traditions. One of these is the cèilidh (pronounced "kay-lee"), which is the name given to a party that involves (a subset of) Scottish country dancing. Usually takes place at weddings but can happen at other social functions. Music is usually provided by a band with accordions, fiddles and drums. If there are a lot of newbies present, someone from the band will usually call out instructions. One of the better known ceilidh dances is ''The Gay Gordons''.

Ceilidhs are still popular in Real Life, with most Scottish kids being taught the dances at school from the age of about 6 or 7 onward, usually at Christmas time.

Happens a lot in Ireland too, and cities with a large Irish community where traditional music is played. In Irish (rather than Scots Gaelic), it's spelled céilí.

A Sub-Trope of Dances and Balls.