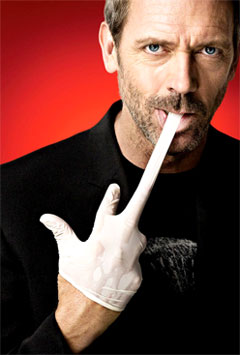 They say an apple a day keeps the doctor away. After seeing this guy, make sure of it.
Kerry: Did you even take the Hippocratic Oath?
Romano: I had my fingers crossed.
— ER
Advertisement:

He's a very skilled doctor, so dedicated to his job that he doesn't seem to have any other kind of life; but he appears to have little to no compassion, is often narcissistic, a maverick, rebuffs any friendly gesture, and speaks only in snide put-downs or irritable complaints about how stupid human beings generally are. He spits in the face of the image of doctors as saintly humanitarians — but of course, he's so prevalent now that he's become a trope of his own.

His attitude is often explained by the notion that, in order to become such a good physician, he's had to make a habit of treating people as machines and "never letting his feelings get in the way". In his worldview, it would be unthinkable to cut another human being open and tinker with their insides, so he forces himself to view others as if they're not people. (Despite this, he still admits It Never Gets Any Easier; he just suppresses it.) In many ways, he's often the ultimate Jerk with a Heart of Gold, since he often demonstrates that he really does care about people deep down by doing whatever it takes to save their lives. He's also probably genuinely good at medicine, leading people to grudgingly admit Jerkass Has a Point.

This character's attitude towards patient care can go two different ways: Either he will do anything within his power to heal the sick, or else he's in hospital administration and would shovel the patients into a furnace if it saved money. Either way, he's abnormally prone to Pet the Dog moments, so watch out.

See also Morally Ambiguous Doctorate and Mad Doctor, when you have to question who in their right mind would give this person a license in the first place.