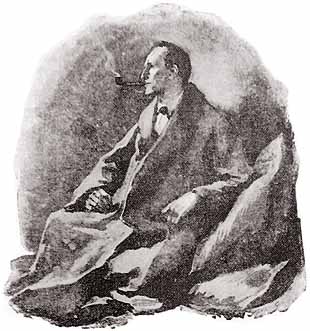 "The Game's Afoot!"
"Here dwell together still two men of note
Who never lived and so can never die:
How very near they seem, yet how remote
That age before the world went all awry.
But still, the game's afoot for those with ears
Attuned to catch the distant view-halloo:
England is England yet, for all our fears—
Only those things the heart believes are true.
A yellow fog swirls past the window-pane
As night descends upon this fabled street:
A lonely hansom splashes through the rain,
The ghostly gas lamps fail at twenty feet.
Here, though the world explodes, these two survive,
And it is always eighteen ninety-five."
— "221B", Vincent Starrett
Advertisement:

The Great Detective. As Dracula is to vampires and Superman is to superheroes, so Sherlock Holmes is to detectives.

Throughout the stories, only one person ever refers to Holmes as "Sherlock", and that's his brother. Nearly everyone else, even Watson, calls him "Holmes" or "Mister Holmes". This is normal for Victorian and Edwardian England; at the time, men would only use a first name to address family members, romantic partners (and you had to be all-but-engaged), junior servants, or childrennote women might use first names alone for each other, but only if they were the closest of friends. One minor character in "The Sign of Four" refers to him as "Mister Sherlock", which, in context, implied that he'd known Holmes since boyhood. Additionally, this is updated and played with in the 2011 Ritchie sequel, where Mycroft calls his brother "Sherly" on a number of occasions.

Literature (post-Conan Doyle)
Live-Action TV
Radio
Tabletop Games
Theatre
Video Games
Webcomics
Western Animation
Films — Live-Action
A number of films were made (Holmes has appeared in more films than any other single fictional character), some of which took a number of liberties with the story:
Literature