Leader of the Autobots. His Special Ability is Air Strike. Voiced by Peter Cullen. 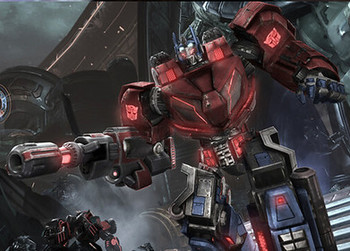 "I will accept the burden, with all that I am." 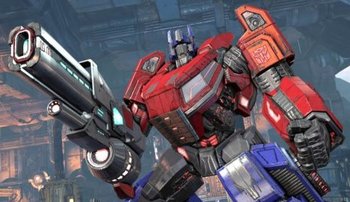 "It has been a long, painful war with the Decepticons."
Advertisement:
Ratchet
The Autobots' main medic. Voiced by Fred Tatasciore. 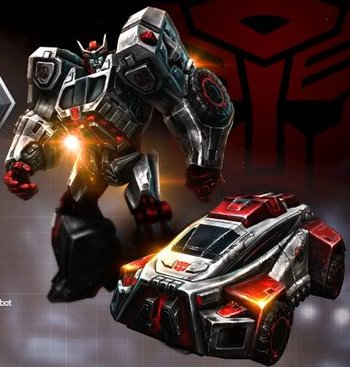 "Be still. I'll get you fixed up."
Bumblebee
An Autobot Scout. Was rendered mute under unknown circumstances (in Transformers: Prime, which this is sort-of in-continuity with, it's an injury from Megatron) since the last game. 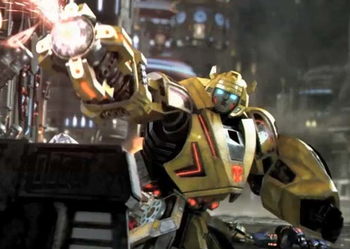 "The only secure way to communicate is by messenger. I volunteered. Name's Bumblebee."
Ironhide
A war veteran and old friend of Optimus's who's main mission is to protect the Ark. Voiced by Keith Szarabajka. 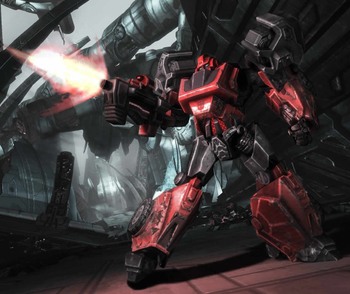 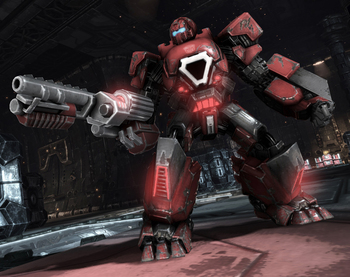 "Bang bang, you're KABLAMED!"
Grimlock
A powerful, very large, Autobot who leads a group known as the Lightning Strike Coalition Force. He was captured by Shockwave and his Insecticons and experimented on to make him even more powerful. His Special Ability is Dino Mode. He dislikes Optimus' less aggressive attitude toward the Decepticons and displays violent behavior that indicates he's not in the best mental health, but is ultimately a good guy underneath it all. He consciously remembers Shockwave rebuilding him and can grasp that power was siphoned away from his brain's circuitry. After Starscream somewhat inadvertently frees him, he plans to get his revenge after rescuing his team. Voiced by Gregg Berger. 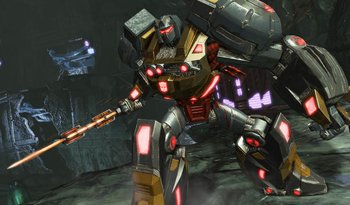 "No-one-controls-GRIMLOCK!"
Advertisement:
Slug
Grimlock's 2nd in command. Was turned into a Triceratops by Shockwave, but escaped on his own before meeting up with Grimlock. Voiced by Travis Willingham. 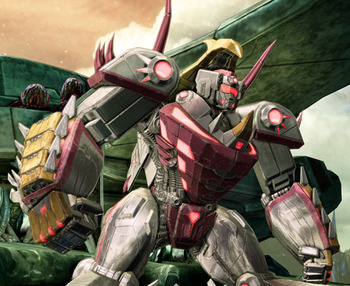 "Excuse me."
Swoop
An expert bomber and good friend of Grimlock. His modifications cause him to become a Pterosaur. Voiced by Mark Allan Stewart. 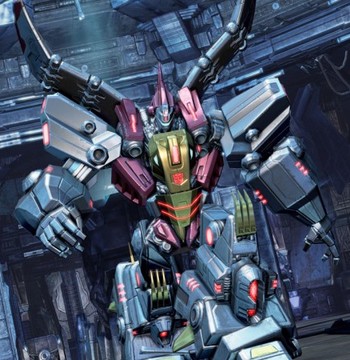 "I like flying!"
Cliffjumper
A test subject for cloaking technology who's partnered up with Jazz in search of Grimlock's whereabouts. His Special Ability is Cloak. Voiced by Nolan North. 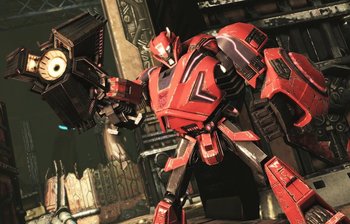 "I'm not called Cliffjumper for nothing."
Jazz
A close friend of Optimus Prime who's partnered up with Cliffjumper. His Special Ability is Grappling Hook. Voiced by Troy Baker. 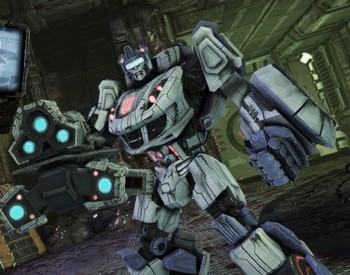 "See? Under control, baby."
Jetfire
An Autobot scientist and Aerialbot. His Special Ability is Shockwave. Voiced by Troy Baker. 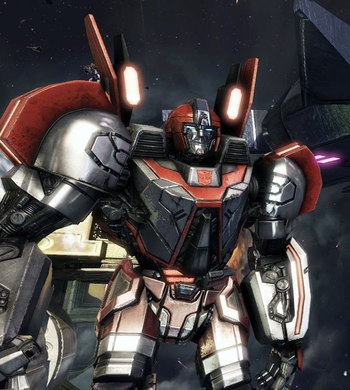 "Alright, Autobots! Let's turn and burn!"
Advertisement:
Metroplex
An ancient Autobot titan the size of a city, awakened by Optimus Prime to turn the tide of the war. Voiced by Fred Tatasciore. Technically not playable; his actual presence in gameplay is to give Optimus Prime the ability to call artillery strikes. 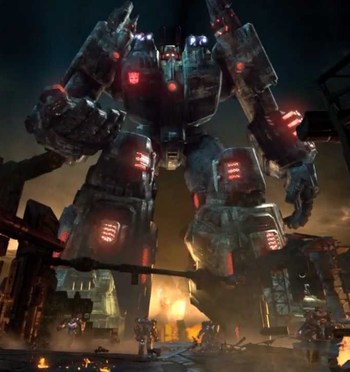 "Metroplex heeds the call of the last prime."
Perceptor
The head of the Autobots' science division, meaning he's largely in charge of the Ark project. Voiced by Jim Ward. 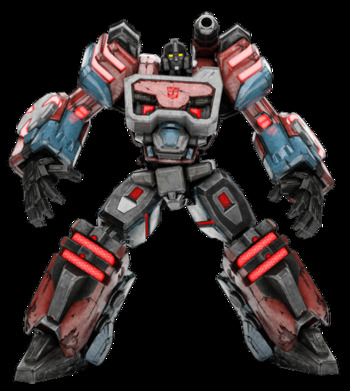 Megatron
Leader of the Decepticons. Aims to eradicate all surviving Autobots even though he's effectively won. His Special Ability is Hover. Voiced by Fred Tatasciore. 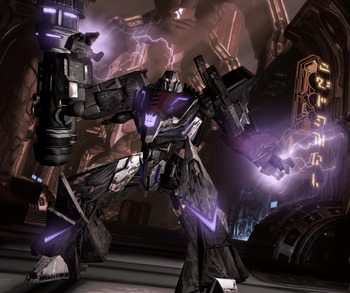 "Through my will alone shall Cybertron be restored."
Starscream
Megatron's treacherous second-in-command. His Special Ability is Cloak. Voiced by Sam Riegel. 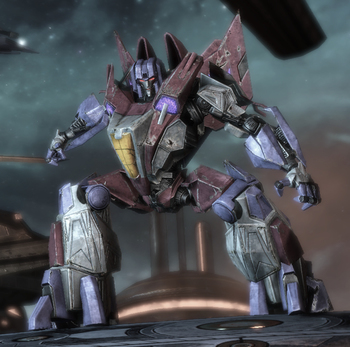 "If anyone can hear ME, feel free to listen in as I execute your friends."
Soundwave
The Decepticons' surveillance officer and Megatron's most loyal follower. His Special Ability is Eject Minicons. Voiced by Isaac C. Singleton Jr. 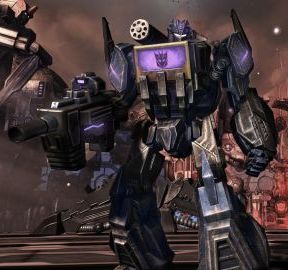 "Autobots. How predictable."
Combaticons
A team of skilled and powerful Decepticons capable of combining into the mighty Bruticus. Three of them are playable; their Special Abilities are Shockwave, Grappling Hook and Sonic Pain Wave belonging to Vortex, Swindle and Bruticus, respectively. Voiced by Travis Willingham (Onslaught), Dave Boat (Vortex), Nolan North (Brawl and Bruticus) Steve Blum (Swindle), and Keith Silverstein (Blast Off).

Shockwave
A Decepticon scientist who exploits science for his own twisted interests. Among other things, he's responsible for turning Grimlock and his team into the Dinobots. Voiced by Steve Blum. 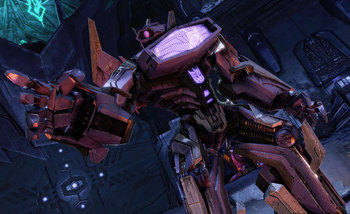 "Now, sit there like a good pet while I finish my work."
The Insecticons
A group of creatures that emerged from the underbelly of Cybertron and were discovered by Shockwave, who calls them his "pets". Most simply act as mooks and cannon fodder, but the three that display distinct personalities are Sharpshot, Hardshell, and Kickback. They lead the other Insecticons and are appear to only obey Shockwave due to unspecified methods of mind-control. Voiced by Troy Baker (Kickback) and Steve Blum (Sharpshot).
Trypticon
Initially a non-aligned research orbital station, he gets infused with Dark Energon and used as a colossal warrior for Megatron. Later his comatose body gets forcibly converted into the Decepticons flagship, The Nemesis.