This covers characters that are recruitable through the main story, as well as the two NPCs Vyrn and Lyria (though the latter was Promoted to Playable).

I'll cross these boundless skies to the place you promised— I'll find you no matter what, Dad. 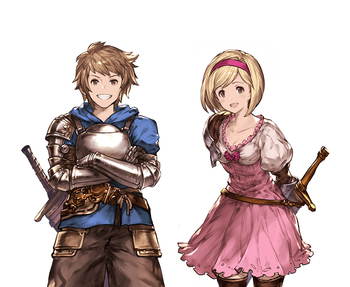 The Main Character which the player controls throughout the game. You can choose either Gran, the male protagonist (and titular character) or Djeeta, the female protagonist, (whose name is derived from Taji, the "tasy" part of Fantasy in Japanese, phonetically backwards).

They are the child of a famous skyfarer, but he disappeared in their childhood with only a letter's promise to come to Estalucia, the legendary island of the Astrals. They've been waiting for years at their childhood home of Zinkenstill, idly dreaming and waiting with best friend Vyrn for the day they meet him again. That is, until an Erste airship passing by has a sudden explosion and a blue-haired girl falls into the nearby forest... 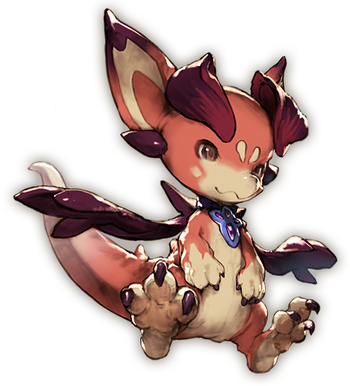 The protagonist's best friend, a red dragon they had found in the forests of Zinkenstill. 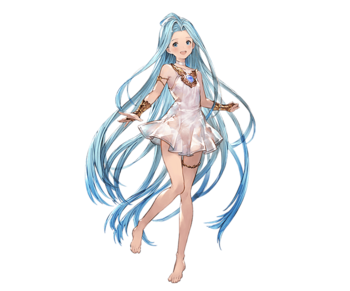 The Girl in Blue

A mysterious girl that the protagonist runs into one day while training in the forests of Zinkenstill, which triggers the whole plot of the story. Experimented on and pursued by the Erste Empire for reasons unknown, her plight moved Katalina to free her, and her powers save the Captain-to-be from certain death, tying their fates together forever. But how does she even have such power...?

Lyria "joins" you right at the start of the game, but in the main is more a game mechanic than a proper playable character - she's the in-universe explanation for why you can summon manifestations of Primal Beasts, and since you two are life-linked, that's why summons are unavailable if the Captain goes down in combat. The big draw of the event to commemorate Granblue's third anniversary in 2017, "What Makes the Sky Blue", was her finally getting a party-line playable version.

Lyria, I promised to show you the outside world. And no matter what happens, I'll stand by that promise. 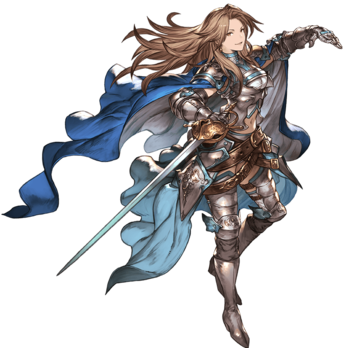 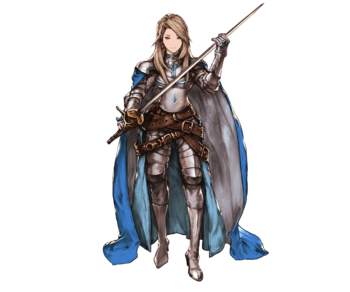 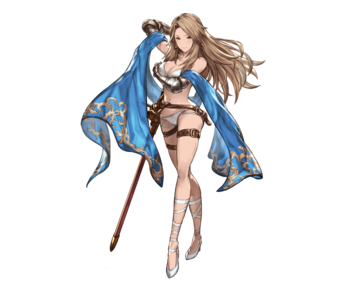 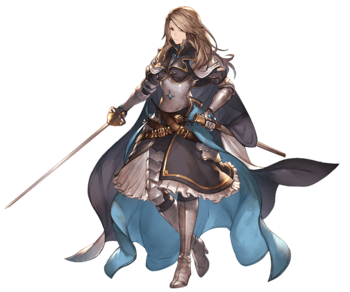 A former Knight of the Erste Empire and assigned as Lyria's Guardian. Katalina still keeps her vow of watching over the Girl in Blue no matter where the skies may take them. Just with a stroke of luck, both of them happen to stumble upon the protagonist in the midst of escaping from Erste soldiers.

She's one of the initial characters recruited during the prologue. 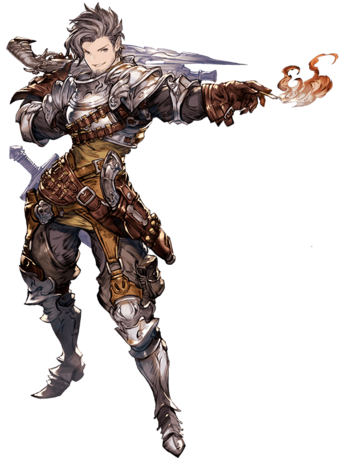 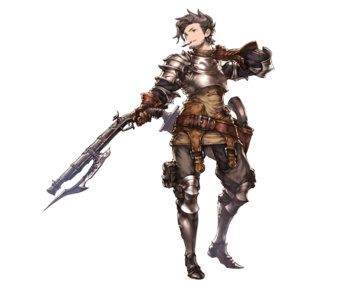 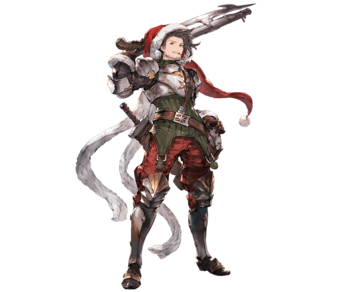 A helmsman from Port Breeze, he joins the player as the pilot of the Grandcypher at the conclusion of Chapter 4. As he treats the disabled Grandcypher like a family, Rackam dedicated most of his time trying to get her back to working condition. When the captain's small group landed on the port, he becomes entangled in the conflict that surrounds the party against the Erste Empire. 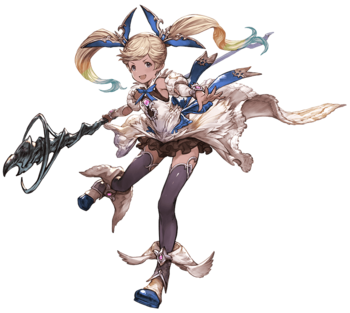 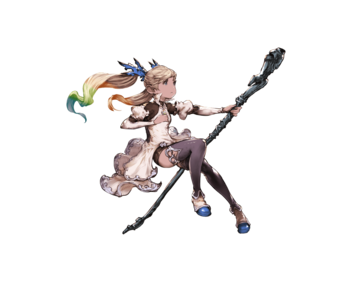 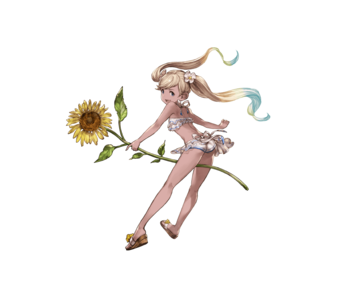 The apprentice mage of Count Tzaka the Great. She joins the party to help find the missing archduke, and later stop him from his plan which involves weaponizing a Primal Beast. When the conflict in Valtz Duchy resolves itself, Io officially joins the party after Chapter 8. 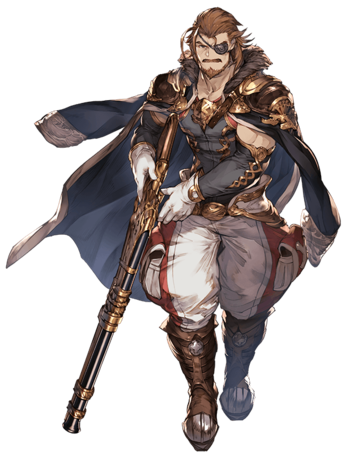 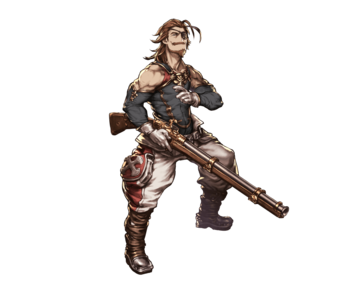 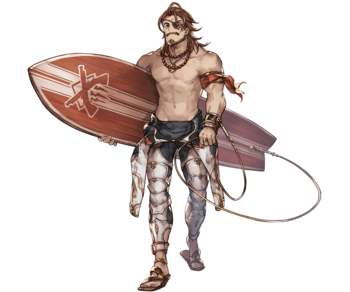 A captain of a mercenary band hired to protect Auguste Isles. While he seems carefree and is an acquaintance of Rackam, he may be much more attached to the struggle against the Erste Empire than he lets on...

He is recruited at the end of main story chapter 12. 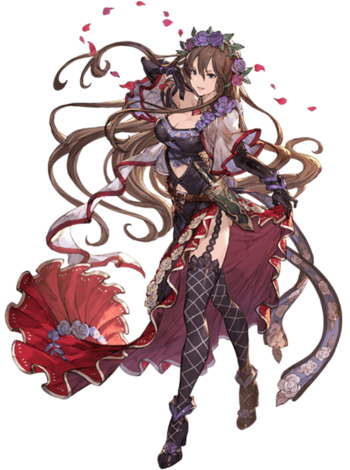 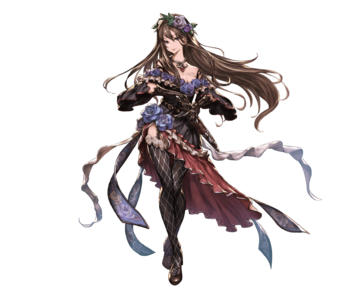 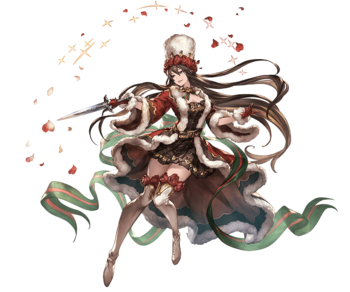 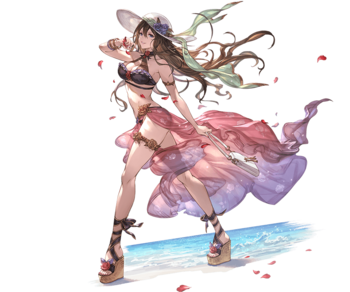 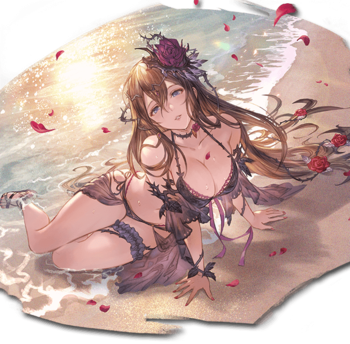 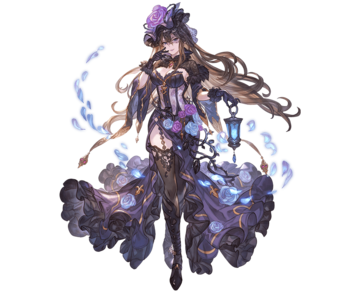 An enigmatic woman the crew meet in the Lumacie Archipelago, she hides far more secrets then they initially realize. For tropes regarding her primal beast version, see the Primal Beasts page. She joins the crew at the conclusion of story chapter 16. 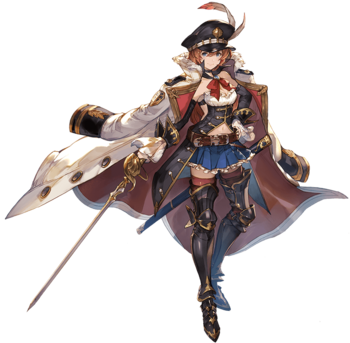 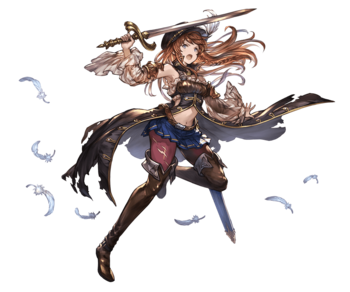 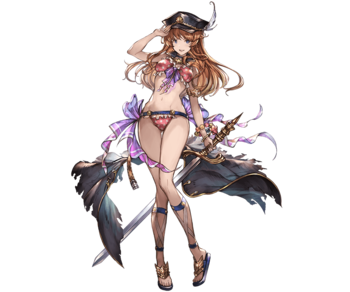 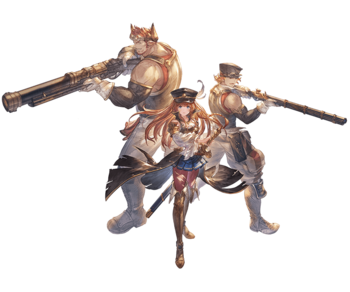 A member of the Enforcers, she eventually joins up with the Grandcypher crew under the permission of her superior Admiral Monika. She like Rosetta aka Rose Queen originates from Rage of Bahamut. 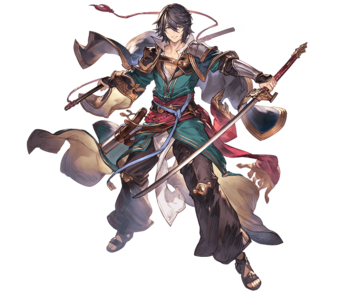 The Prodigy of the Dawn
Story Version 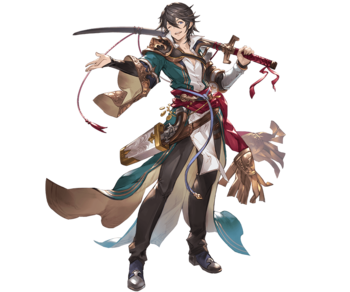 Initially presenting himself as a free spirit when he meets the crew on Merkmal Island, he is in actuality a general of the Idelva Army. He assists the crew under orders from the Sovereign of Idelva. 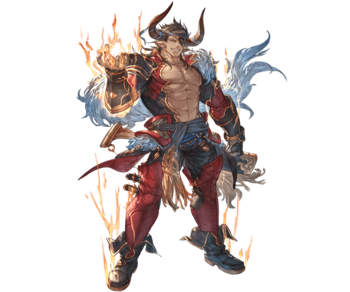 War-god of the Dawn
Story Version 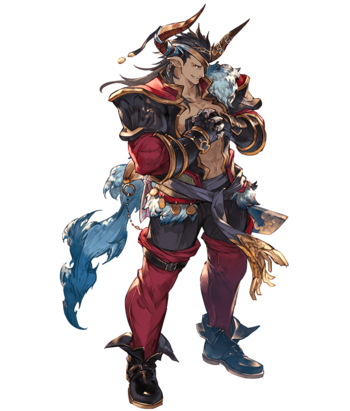 A former soldier of the now-defunct Torhid Empire, he leads his army of bandits and attempts to declare their independence on Merkmal Island. Although his plans were eventually foiled by the crew, he now assists them under the orders of Idelva's sovereign, Pholia.