This covers other non-playable characters that are encountered throughout the story or events.

Covers the Seven Luminary Knights who are sworn to serve the True King and oversee the Skydoms under his dominion. The knights are sorted in order of introduction.
Shared Tropes
The Black Knight

See the Granblue Fantasy Humans A To E page. 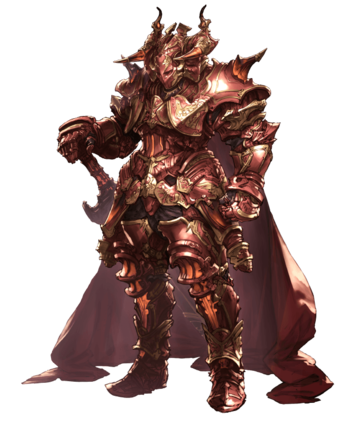 A Draph Luminary Knight encountered by the crew on their first visit to Lumacie Archipelago. He seems to be familiar with Lyria and acquainted with the protagonist's father. For reasons yet to be explained, he challenges the crew to a fight to test their strength.

A Luminary Knight, founder of The Enforcers, and Lecia's father. He was once part of the crew of the protagonist's father. His character originates from Rage of Bahamut.
The Golden Knight 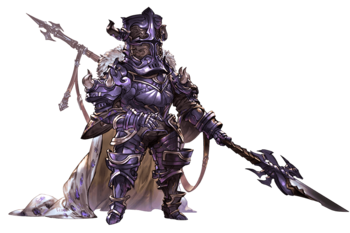 A wandering Luminary Knight, and a family man who has connections with the Rhem Kingdom.

The White Knight
The Green Knight 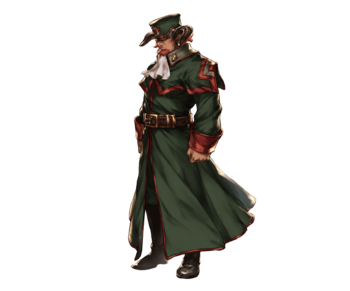 A draph and member of the Valtz intelligence service, though few are aware of this fact. He lives by a simple code: legal or illegal, if a job's worth doing, it's worth doing well.

A young boy living in Zinkenstill and the childhood friend of the captain. Firra's appearance as a young girl

Named Firra, she left Tramont island some time before it was practically cut off from the world. 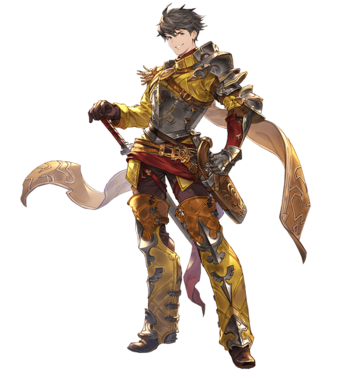 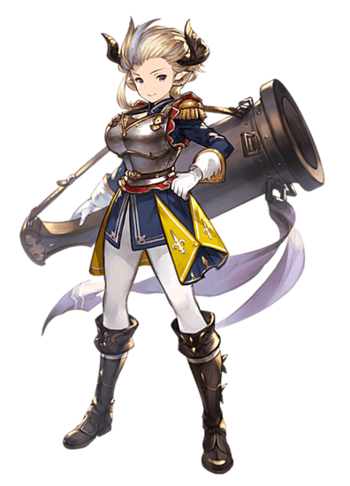 A Draph subordinate of the Golden Knight. 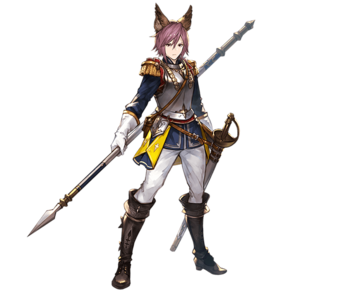 An Erune subordinate of the Golden Knight.

The man who serves as the reason why The Quest to find Estalucia even started in the first place. He left behind a letter to his child telling them to meet him in the island. Little is known about him, not even his name. Yet he has become known by key figures throughout the Skydom.

A travelling doctor who visited Tramont island at the time it was ravaged by an epidemic. He is the one that summoned Celeste.

An organization that seems to span in multiple skydoms. Their true purpose is shrouded in mystery and known only to its upper command, but they have been known to provide powerful weapons and missions to their agents in order to stop threats throughout the Skydoms. Zeta, Beatrix, Vaseraga, Ilsa, Eustace, and Alandus all belong to this organization, as did Guzaletha before he defected.

The enigmatic head of the entire Society. As its founder, she laid out the directives that would guide the Society as they investigate Primal Beasts, Automagods, and any other suspicious matters throughout the Skydoms. 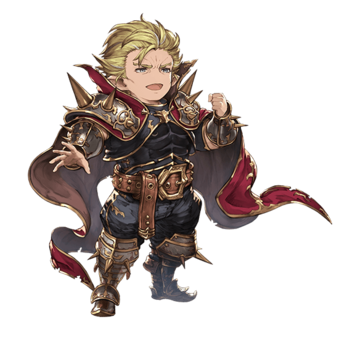 The leader of the Odajumoki gang and one of the former heads of the Society, whose disagreement over the organization's path led to his resignation and retreat to the North Vast. He is the antagonist of the event "Gripping Freedom". 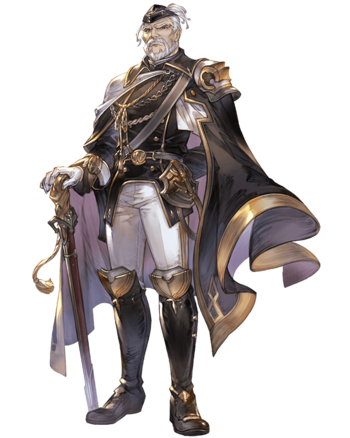 One of the Society founders and its head researcher. He merges with Automagod Pyet-A, Cassius' spear, Yek, and the seal weapon, Embrasque, to become a new automagod, Versatile. He serves as the true antagonist of the event, "Second Advent". 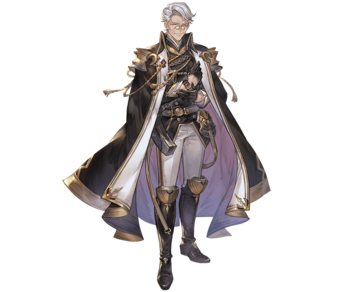 A high-ranking member of the Society. He's a part of the splinter faction that opposes the weapon contractors, and he first appeared in "Spaghetti Syndrome". 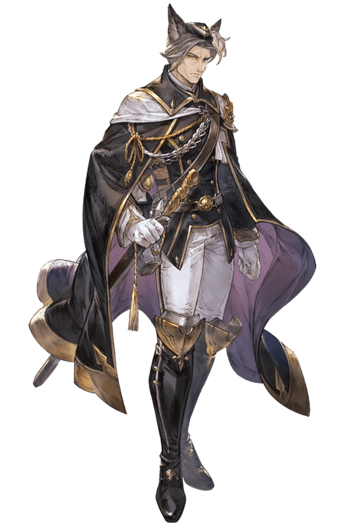 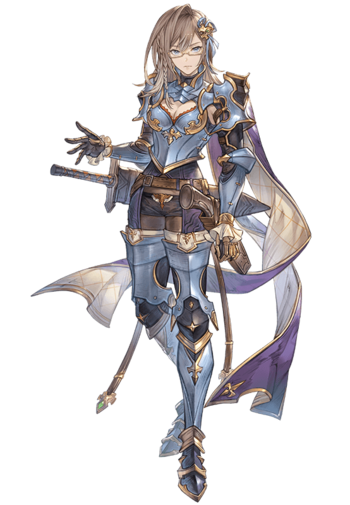 A promising young recruit placed under Ilsa's command who's been chosen as a weapon contractor candidate.

The Foe
A group of individuals that sow discord among the Phantagrande Skydom and beyond. Later identified in the Right Behind You event as dwellers of the moon, they serve as the Greater-Scope Villain of several events and the main villain of an overarching storyline fighting against the Society. 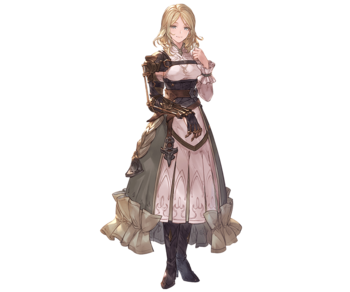 A descendant of moon dwellers, and a member of the Foe. She makes her first formal appearance in "Spaghetti Syndrome".

Moondwellers
The mysterious inhabitants of the moon, who after eons of unknown activity, have begun to take an interest in the Sky World once more. 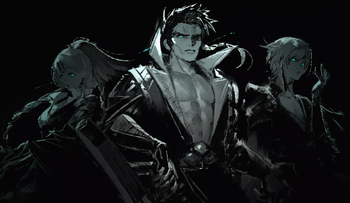 Three moondwellers who make up the lunar Quarantine Unit, and are regarded as some of the moon's greatest warriors. They make their first appearance at the end of "Spaghetti Syndrome". 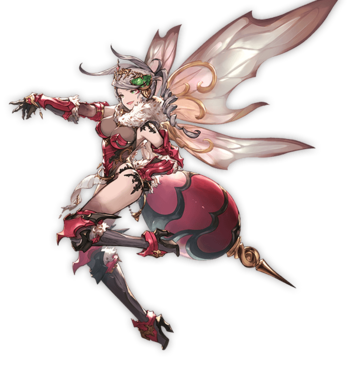 Originally introduced as a raid boss and obtainable summon in the now-defunct Defense Order event, Queen Bee reappears as the final boss of the event, "Little Skyfarer a la Sacre Blumiel". She guards the highly coveted Royal Honey which the MC, Lyria and Vyrn plan to obtain in order to serve to Charlotta. 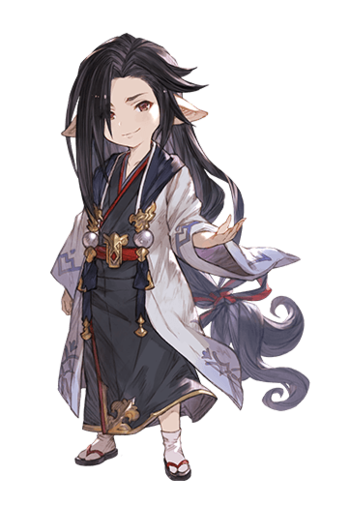 Sevilbarra's brother-in-law who was driven to revenge when Keralbarra, his wife-to-be was killed on the day of their wedding under the hands of a demon blade possessed Corwell. He is the final boss of the "Reflections for a White Clover" event.
Lindwurm

A golden dragon who awakens and notices a disturbance in the force caused by the Captain's Singularity status. He attacks them to deal with this error. 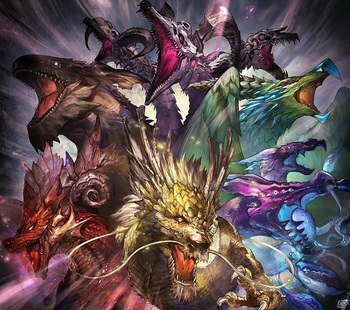 Dragon's Circlenote Clockwise from the top: Fediel, Ewiyar, Wamdus, Lu Woh, Wilnas and Galleon.
Six, chromatic, all-powerful elemental dragons that awaken after beating Lindwyrm, who awaken to defeat the Captain due to their status as the "singular pigment". They are Wilnas the Vermillion, Ewiyar the Emerald, Wamdus the Azure, Galleon the Golden, Lu Woh the White, and Fediel the Black