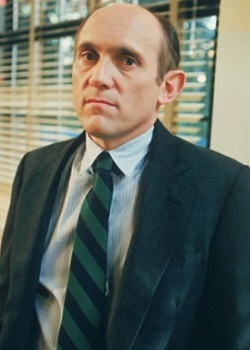 "Kids...I don't like 'em."
Portrayed By: Armin Shimerman
"A lot of educators tell students, "Think of your principal as your pal." I say, "Think of me as your judge, jury, and executioner.""

The conservative, paranoid, and authoritarian Principal of Sunnydale High from 1997 to 1999, following the death of Principal Robert Flutie.

In direct contact with the Mayor of Sunnydale, Principal Snyder spent a good deal of his efforts covering up the otherworldly occurrences that took place in the school through contrived and flimsy explanations. Aside from that, Snyder was also keen on maintaining and improving the school's image without any real concern for the students that went there. 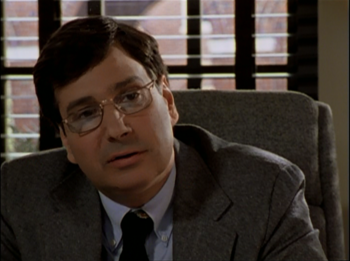 "When I was your age we cared about the school's reputation and the football team's record, all that stuff! Of course, when I was your age I was surrounded by old guys telling me how much better things were when they were my age."
Portrayed By: Ken Lerner
Buffy: Mr. Flutie...
Mr. Flutie: All the kids here are free to call me Bob.
Buffy: Bob—
Mr. Flutie: But they don't.

The principal of Sunnydale High when Buffy Summers arrived in Sunnydale. 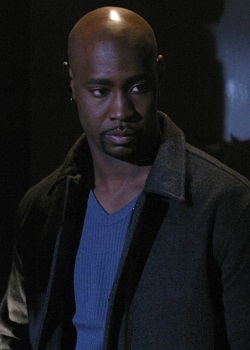 "I knew I signed on for something, but, Buffy, I'm just a guy. Granted, a cool and sexy vampire-fighting guy, but still."
Portrayed By: DB Woodside & Damani Roberts
"I'm only saying that once you see true evil, it can have some serious afterburn, and then you can't unsee what you saw. Ever."

The principal of the rebuilt Sunnydale High School. He was a freelance vampire hunter, seeking revenge on the vampire that had killed his mother, the Slayer, Nikki Wood. 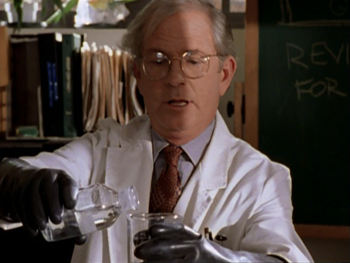 "I gather you had a few problems at your last school?"
Portrayed By: William Monaghan
"Don't be sorry. Be smart. And please don't listen to the Principal or anyone else's negative opinions about you. Let's make 'em eat that permanent record. What do you say?"

The science and biology teacher in Sunnydale High. 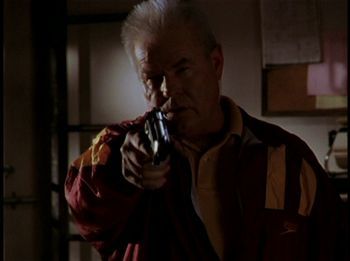 "They're gonna be the best. I don't accept anything less."
Portrayed By: Charles Cyphers
Appears In: "Go Fish"
"I'm just lookin' after my boys. They may be out of the game right now, but they're still a team. And a team's gotta eat." 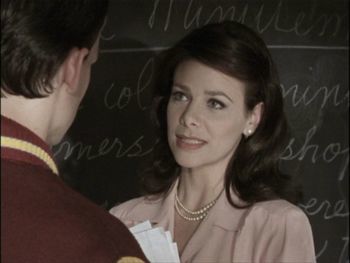 "I just want you to be able to have some kind of normal life. We can never have that - don't you see?"
Portrayed By: Meredith Salenger, David Boreanaz, Sarah Bibb, Miriam Flynn
Appears In: "I Only Have Eyes For You"
"I'm the one who should be sorry, James. You thought I stopped loving you. But I never did. I loved you with my last breath."

During her time at the school she began an affair with honor roll student James Stanley, but when she attempted to break it off to give him a chance at a normal relationship James lost his temper and shot her, subsequently taking his own life in grief.

Jennifer "Jenny" Calendar AKA Janna of the Kalderash 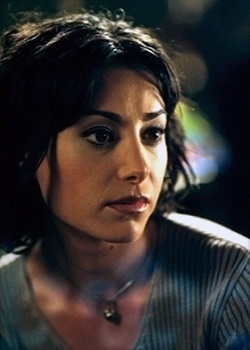 "You know, people are always sending stuff my way. They know the occult's my turf."
Portrayed By: Robia LaMorte
"I know our ways are strange to you, but soon you will join us in the twentieth century, with three whole years to spare."

A computer science teacher at Sunnydale High. She was also an ally of the Scooby Gang and the love of Rupert Giles.

She hid from all of them that she was a member of Clan Kalderash sent to watch over Angel, and went by the name Jennifer Calendar. 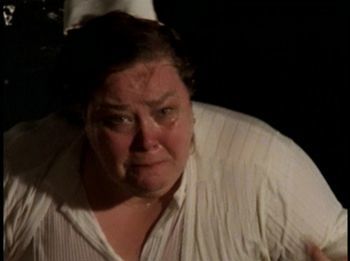 "This has got to stop, Carl. Those poor children."
Portrayed By: Conchata Ferrell
Appears In: "Go Fish"
Coach Marin: Take good care of my boy, Ruthie.
Nurse Greenliegh: I always do. 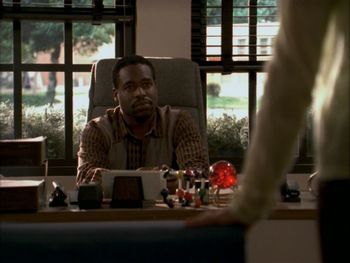 "Look, Buffy, any person — grownup, shrink, pope — any person who claims to be totally sane is either lying or not very bright. I mean, everyone has problems. Everybody has demons, right?"
Portrayed By: Phil Lewis
Appears In: "Beauty and the Beasts"
"We're not gonna be friends. You have friends already, I hope. Friends are a good thing. Mm-hm. They like you, agree with you, tell you what you wanna hear. That's not what you need right now. What you need is a trained, not... too crazy professional who will always give you his honest opinion." 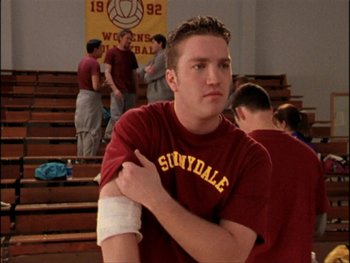 "How do you think people are going to look at me once they find out I'm gay?"
Portrayed By: Larry Bagby III
"It's ironic. I mean, all those times I beat the crap out of you, it musta been because I recognized something in you that I didn't want to believe about myself." 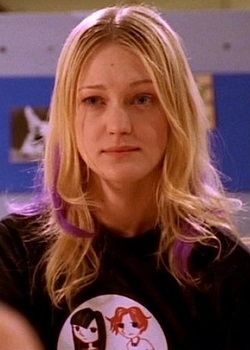 A Sunnydale High student with psychic abilities and a friend of Dawn Summers. 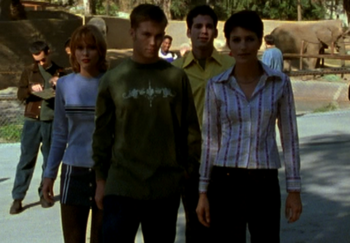 "Y'know, I don't understand why you're sitting at our table."
Portrayed By: Eion Bailey, Brian Gross, Jennifer Sky & Michael McRaine
Appear In: "The Pack"
"Were you this popular at your old school? Before you got kicked out?"

A group of bullies, plus Xander Harris, who were unwittingly possessed by the spirits of a pack of hyenas. 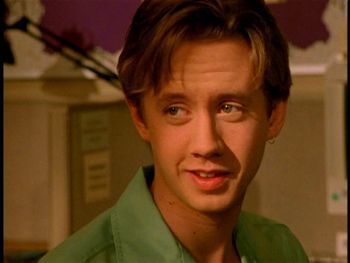 A Sunnydale High student and one of the prized pupils of Jenny Calendar alongside Fritz Siegel and Willow Rosenberg.

"I'm jacked in."
Portrayed By: Jamison Ryan
Apppears In: "I Robot, You Jane"
"The printed page is obsolete. Information isn't bound up anymore, it's an entity. The only reality is virtual. If you're not jacked in, you're not alive."

A Sunnydale High student and one of the star pupils of Jenny Calendar, along Willow Rosenberg and David Kirby, although his enthusiasm for computers bordered on obsession. 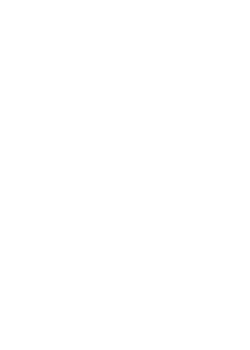 to see her when she was visible.
Portrayed By: Clea Duvall
Appears In: "Out of Mind, Out of Sight"
'"I won 'cause you didn't see me coming. Cordelia, you don't remember me. I remember you, all your idiot slut friends, hate them. They take your life and they suck it out of you! But then they didn't see me coming. They gotta learn. They gotta learn." 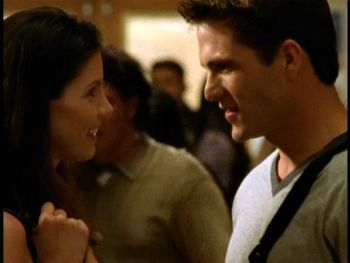 "I'll get everything tonight after practice. The guys'll help me."
Portrayed By: Scott Gurney
Appears In: "Prophecy Girl"
Cordelia: You're so sweet! Why're you so sweet?
Kevin: I dunno! 'Cause I'm usually mean as a snake!

A Sunnydale High student. Cordelia Chase dated Kevin, but unlike many of her other relationships, Cordelia and Kevin seemed to genuinely care for each other. 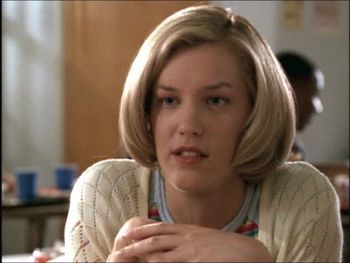 "He does love me. He does love me."
Portrayed By: Danielle Weeks
Appears In: "Beauty and Beasts"
"It... it's not his fault. I mean, he's not himself when he gets like this."

A Sunnydale High student and girlfriend of Pete Clarner. 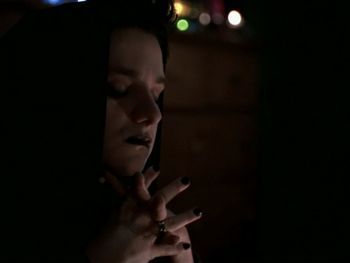 "My dad. His friends. They're taking people out of their homes. They're talking about a trial down at City Hall. They got Amy."
Portrayed By: Blake Soper
Appears In: "Gingerbread"
Cordelia: Michael is whatever the boy of "witch" is, plus being the poster child for yuck.

A Sunnydale High student and a warlock. 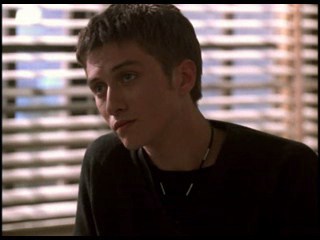 "Murder? What murder? You're not here about the review?"
Portrayed By: Keram Malicki-Sánchez
Appears In: "Earshot"
Buffy: Willow, who's that guy?
Willow: That's Freddy Iverson. He writes those editorials for the school paper. He's sardonic.

A Sunnydale High student and editor of the school newspaper. 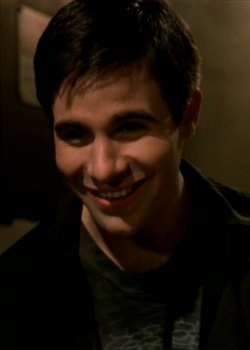 "Gotta have a redundancy system. Any incompetent knows that."
Portrayed By: Brad Kane
Appears In: "The Prom"
"My three fiercest babies are on their way to the dance right now. You think formal-wear makes them crazy? Wait 'til they see the mirror ball."

A Sunnydale High student and the older brother of Andrew Wells. 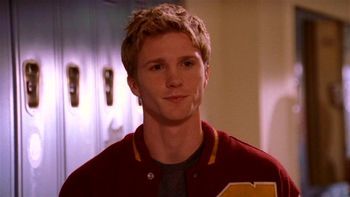 " It's not like I meant to hurt anyone."
Portrayed By: Thad Luckenbill
Appears In: "Him"
"I just — get along really well with girls."

A Sunnydale High student and the younger brother of Lance Brooks.

'Played By: Ra'ven Larrymore Kelly
One of Dawn's classmates.
Janice

Played By: Amber Tamblyn
Another friend of Dawn, who has some run-ins with vampires with her on Halloween.
Chris

Portrayed By: Angelo Spirizzi
One of the smartest kids at the school, who has a Dark Secret; namely that he's resurrected his dead brother.
Eric

Portrayed BY: Alex Breckenridge and David Zepada
Classmates of Dawn at the start of season 7.