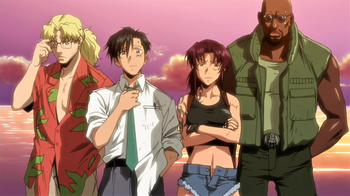 Just your everyday group of couriers. 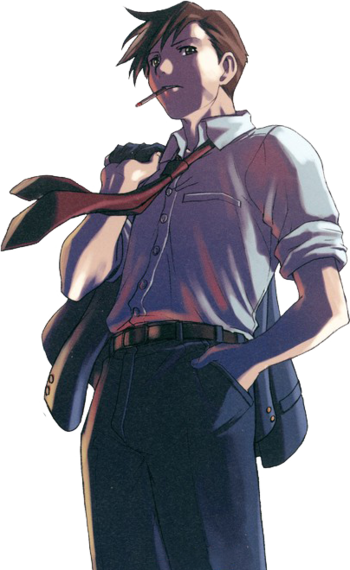 Voiced by: Daisuke Namikawa (JP), Brad Swaile (EN)
"My life had become the rush-hour commute, the fake laughing, lowering my head, risking my life to score points. And all of that was fine as long as I had a place to drink after work and a batting cage nearby. And then, just like that, none of that mattered anymore."

A former Japanese Salaryman, Rokuro "Rock" Okajima serves as the the Lagoon Company's negotiator and translator, and is the series' primary POV Character. Although the least physically dangerous member of the Company, Rock possesses the ability to negotiate with heavily-armed, insane, hyper-violent individuals; he not only gets out of such negotiations alive, but even convinces them to see things his way.

Voiced by: Megumi Toyoguchi (JP), Maryke Hendrikse (EN)
"All they saw in me was another little ghetto rat with no power and no God. What’s left for a poor little Chinese bitch to rely on? It's money of course. And guns. Fuckin' A, with these two things, the world is a great place."

A nihilistic Chinese-American gunwoman and the Lagoon Company's primary muscle. Known as "Two Hands" after her preferred style of shooting. Her first name is apparently "Rebecca", but nothing more is known of her past apart from the implication that it wasn't a happy one.

Voiced by: Hiroaki Hirata (JP), Brian Drummond (EN)
"Either way, we're not the type to shoot at human beings. That's why we stay with the fort."

An American computer hacker who acts as the Lagoon Company's communications officer and radio operator. 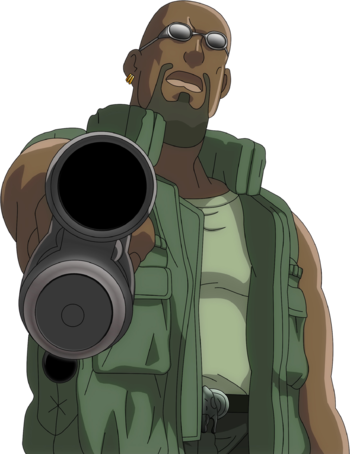 Voiced by: Tsutomu Isobe (JP), Dean Redman (EN)
"A gunman is a professional. A shooter is someone who kills 'cause they got issues. I do not remember hiring Charles fucking Whitman."

A laconic African-American swiftboat veteran; the leader of the Lagoon Company and the captain of the "Black Lagoon".