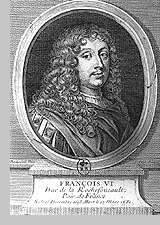 François, Duc de La Rochefoucauld, Prince de Marsillac (15 September 1613 – 17 March 1680) was a noted French author of maxims. You know, those trite, pithy, sentence-long nuggets of advice like your mom used to dispense. But ol' Frankie was better at it than your mom, or else we'd be writing about her instead. He's been recognized as a master of the form for more than three centuries, so he must have hit at least a few nails on the head. He has become a byword for eloquent insight; one who sees through to the true nature of something is a "real Rochefoucauld".

He participated fully in the court intrigue that was the hallmark of 17th-century French nobility. While Louis XIII ("the Just") and his son Louis XIV ("the Sun King") reigned with regal detachment, Richelieu and his ilk made sport of trying to stay on His Majesty's good side. La Rochefoucauld was right there in the middle of the scrum, getting his hands as dirty as anyone's while writing about human nature on the side. His hundreds of pages may be aptly summarized as, "Everyone looks after their own self-interest".

Depending on the lens through which it is viewed, his maxims (collected after his death and published as Maxims) can be seen as the ranting of a cynical misanthrope, or the insightful thoughts of one blessed with keen sense and intellect. Dive on in

and decide for yourself.