Former Soviet Special forces soldiers and veterans of the Afghanistan War. Their country turned its back on them and they followed their commander into a life of crime.

Voiced by: Mami Koyama (JP), Patricia Drake (EN)
"Hotel Moscow will show no mercy to anything in its way. We will reject it and annihilate it. Family, friends, even the pet dog if necessary."

A former Soviet VDV special forces commander turned mafia queen; member (along with Mr. Chang and two others) of the four-person commission that regulates crime in Roanapur. Her real name is Sofiya Irininskaya Pavlovna. 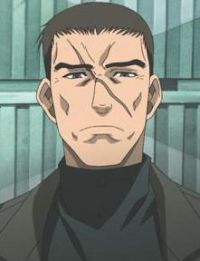 Balalaika's former platoon sergeant during the Soviet-Afghan war, Boris is utterly loyal and devoted to her and is almost always at his Kapitan's side.

A Corporal and ember of the Vysotniki

He is a Private and member of the Vysotniki.